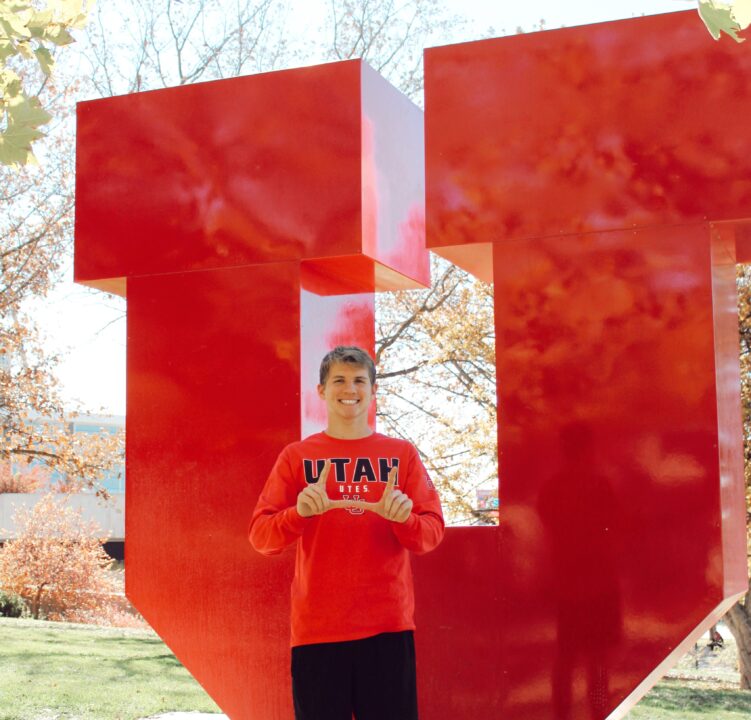 Evan VanBrocklin of Salt Lake City, UT has announced his decision to remain in-state to swim for the University of Utah’s class of 2026. He is currently a senior at Olympus High School and he swims club with Olympus Aquatics.

I am excited to announce my commitment to swim and study at the University of Utah. I could not have achieved this without the unconditional support of my family and the outstanding guidance I received from Coach Tom Thorum at Olympus Aquatics. I look forward to being a part of the Utah program! Go Utes!

VanBrocklin is a 7-time Utah 5A State champion. In February of 2019, the Olympus High School then-sophomore won his first state title swimming the butterfly leg of his team’s 200 medley relay. He later won the 100 fly in a best time of 50.79; he came from behind Aaron Samms of Brighton High School to win the A-final. He ended his sophomore season with a third title, this time swimming the second leg of the 400 free relay.

The following year, VanBrocklin won four titles at the State Champs. He went a 49.23 in prelims of the 100 fly, making him the top seed going into finals by 2.6 seconds. He dominated the A-final, touching first in 49.62. He earned another individual title in the 200 IM, powering to the wall 2.5 seconds ahead of the competition, clocking in at 1:53.89.

He was a member of two of Olympus’ relays, both of which finished first. VanBrocklin anchored the 200 and 400 free relays. In addition, the Olympus boys’ team won the 2021 State title.

VanBrocklin is a US Open Qualifier in the 200 IM and 200 fly (LCM). He went a best time in the 200 IM at the Western Senior Zone Champs to earn his first qualifying, and a week later he picked up an additional cut in the 200 fly.

Below is a table of his top times:

Utah finished 4th at the 2021 Pac-12 Championships. Divers Tony Chen and Luke McDivitt were the team’s leading scorers. VanBrocklin’s top times would have placed him in the C-final of the 100 and 200 fly and 200 breast and the B-final of the 400 IM.

VanBrocklin will arrive on campus in the fall of 2022 with fellow commits Owen Watkins, Brandon Miller, Ike Harms, Jackson Kehler, and Landon Alarcon.