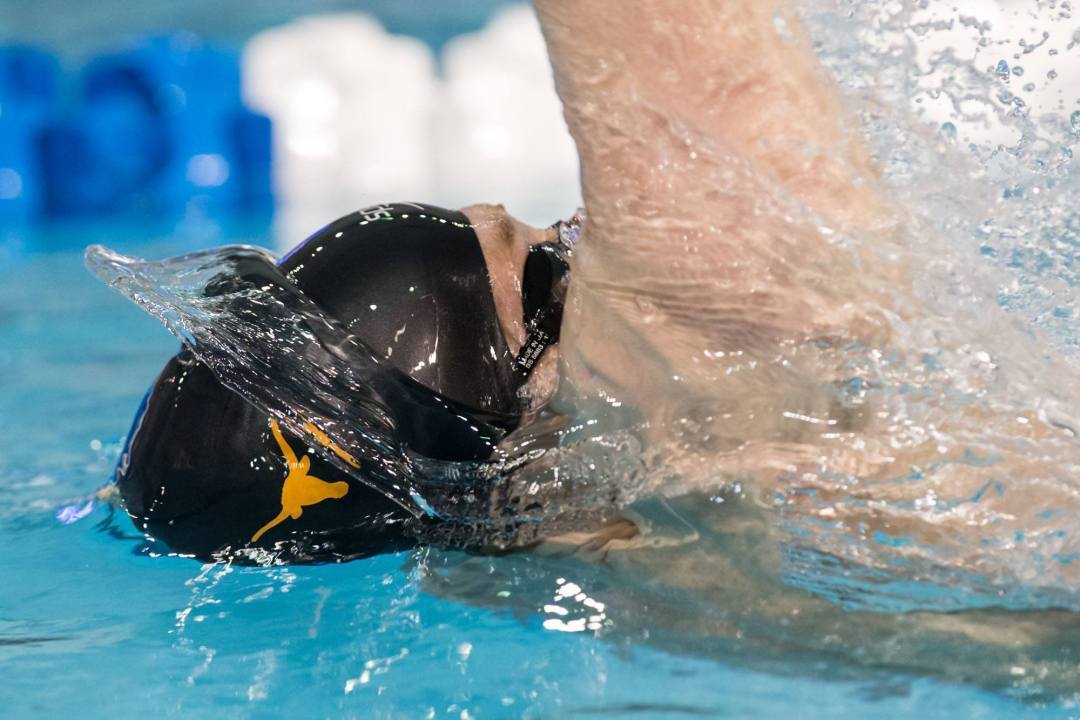 In a letter Friday, student-athletes said they will not engage in recruiting activities until the school officially commits to meet their demands. Stock photo via Tim Binning/TheSwimPictures.com

In light of the recent nationwide calls for change following the killing of unarmed black man George Floyd and a surge in support for the Black Lives Matter movement, student-athletes across sports at the University of Texas are demanding that the school cut ties with symbols of its racist history.

In a letter released Friday, student-athletes said they would not participate in recruiting activities until their set of demands – which includes re-naming buildings, dropping the school song “The Eyes of Texas,” and committing 0.5% of UT Athletics’ annual income to Black organizations – was met with an official commitment from the school.

Among the proposed buildings to be renamed are Robert Lee Moore Hall, Painter Hall, Littlefield Hall and James Hogg Auditorium. The student-athlete group also calls for educating incoming freshmen about the history of racism at Texas.

While the letter mentioned that the football team is behind the demands, media outlets are reporting that multiple sports are involved.

The football players say that they will continue to practice and play in games, but will refuse to engage in recruiting new players if the demands are not met. Notably, Texas Governor Gregg Abbot said Friday that his state is working to make sure that the 2020-21 college football season starts as planned, with some fans in attendance, as it reopens amid the COVID-19 pandemic.

The Texas letter comes on the same day the NCAA released a statement on “social activism,” which encouraged schools to make Nov. 3, 2020 – Election Day – an official off day for student-athletes.

I’m all for it. Except the song….. that one is a little beyond me

If every song that was sung in blackface were to stop being sung then I would venture to say 40% if college songs would be ruled out. The point of bad history is to remember it as not to repeat it. You can’t hide the past. In addition this song was written post slavery. This is a very nit picky complaint where as the rest of their requests are logical and should be done.

Just because something was created after slavery doesn’t mean it can’t be racist. Should we start screening “The Birth of a Nation” again too since its post slavery?

1) Just because the song was sung in blackface doesn’t mean the words are racist, blackface is wrong but it doesn’t mean that everything immediately changes meaning. 2) EVERYONE should watch a birth of a nation. You have to learn history in order to stop it from happening again. The movie is racist and terrible, but it is imperative that everyone understand where our country came from in order to keep it from going back to that way and to advance us farther forward.

The thing is GA BOY, it’s not up to you to determine what is racist and what is not. It is time for you to truly listen, not speak, attempt to love and support African Americans who have continued to suffer significant consequences of 401 years of oppression. Putting your finger on the scale is why our society is revisiting the racism issue again, more than 50 years after the civil rights era, a subtle form of covert racism.

Interesting MLKGHOST. No where in any comment that I have made indicates my race or ethnicity at all. What is wrong with our society is you deciding you know me. You think because of my opinion on a song that I look a certain way and have certain beliefs. That’s racist of you. You have assumed that I was something because of my view points when in reality you have no idea who I am. Where you see subtle racism in society, which there is no doubt that it exists, I see blatant racism in you for the way that you have just unfairly classified me.

If you’re not a white kid who swims for Dynamo, Swim Atlanta, Stingrays or another metro Atlanta club team, I will venmo you $5.

Braden! I appreciate you more and more every day😂

I wasn’t racist and I never assumed you were white just by suggesting that we listen to other experiences and if something is deemed offensive to people who have suffered oppression for far too long then we ought to let them lead the way to change.

But you clearly implied that you shouldn’t listen to my opinion, stating “it’s not up to you to determine what’s racist or not”. This clearly showed an opinion that you had about me. This implies that you think I’m white cause there is no way you would tell someone who was black or brown that. On top of that, if I can’t have my freedom of thought to think what I think is racist then who has it? I’m not here to force things on anybody but I certainly have the right to share my opinions. And if you really wanted to listen, you would listen to my opinion too, you’re not interested in my opinion cause it doesn’t agree… Read more »

Now I’m really curious who you are and what you look like.

GA BOY really taking it to MLKGHOST on this thread and making some great points. You can’t just wash away history and there is value in learning from the mistakes others have made in the past.

Again, there is a difference between learning and glorifying. It’s not complicated.

Yes there is a difference but we glorify everything in our society, every problem and every solution.

As a retired history teacher and a graduate of the University of Texas it makes me sad that people of the 21st-century are trying to force their values on events that took place over one century ago – when, as wrong and offensive as it is today and as hurtful as it was back then, it was the “norm” back at that time. Yes, slavery was wrong, immoral, harmful but the U.S. was not the only country to practice slavery, we didn’t even invent the institution. Minstrel shows are demeaning and discriminatory – I could go on and on but won’t… just a couple of points – if people truly want to make an impact on the world they should… Read more »

You act like “forcing” the values of equality and no more racism is a bad thing. Part of the problem with the US is that some people want others to “get over slavery”, yet there’s still statues and monuments built in honor of slave owners and racist people everywhere. As a country, we should be absolutely embarrassed that slavery ever happened and to have statues and things commemorating people who contributed to it is wrong.

I don’t believe most Americans even know the history behind the statues enough to be offended by them. I believe that’s the narrative they’ve been fed and that’s about all most know about it.

and one need look no further than the vandalism to the monument dedicated to the 54th Massachusetts Regiment Memorial to prove that protesters have no idea.

It’s not about rewriting history, it’s about acknowledging the mistakes of the past and not glorifying them. As society develops, our values change – and often for good reason. With that, we need to learn from the past and teach the history to our children with the clear message of what was wrong and why it was wrong. By erecting statues of certain figures or naming buildings and places after them, we put them on a pedestal to be revered, not criticized and analyzed for their mistakes. Those statues and building names should be reserved for the men and women in this country who truly advanced the idea of what it means to be American and have an equal shot… Read more »

Thanking my lucky stars that you are not a history teacher for my kids. I am so sorry for your students.

Cannot believe you pulled a “yes, but” about slavery. “Yes, the Holocaust was bad, but the Nazi’s weren’t the only ones who engaged in ‘cleansing’ based on religion.”

They are trying to put you out of work history teacher by voiding everything that has happened prior to 2020.😄.

You made some great points, I agree with you. Unfortunately some did not and that is okay. I dislike seeing people tear down these statues or changing school songs, etc. like that is going to solve anything.

Admitting there’s a problem is the first step to finding a resolution.

Those statues being removed glorify people who committed treason against this country by advocating secession from the union and upholding the atrocities of slavery and jim crow. Many were placed in the 20th century by communities as a support of white supremacy and to intimidate minorities.

I agree with you, there clearly are problems and I think a lot of people do admit and see that. Interesting take on the statues. What do you think about renaming specific military bases or dropping the song The Eyes of Texas?

Removing statues does not “rewrite history”—it rewrites the present and future. Remember, many of the statues being taken down were erected for the purpose of glorifying racism and reminding black people that the majority is still against them. While, for example, Robert E. Lee may have redeeming qualities, a specific statue of him that was placed to intimidate a black community is irredeemable with or without a plaque explaining the historical complexities of Gen. Lee.

I read one of the “read more” links above. The one about Him Hogg, because that name just screams racist. It’s an interesting article and only talks briefly about his work. The author quotes a historian who says, “We have to remember not to be present-minded,” when putting his career in context. He championed anti-lynching laws when it wasn’t popular, but he allowed segregation on trains to pass. He picked his battles. I’m sure there’s more to the story, but it also sounds like he did some good things; maybe keeping his name on a building is ok? Otherwise, when are we going to rename Washington DC or the state of Washington, or countless other states and cities named after… Read more »

Well, we can start with Russell Senate Office Building, named after Richard Russell, famous racist from Georgia. The fact that a senate building has his name is an embarrassment for this country.

As a Georgian I support this, not a person I want representing my state or as someone that should be looked up to in our country!

I can get behind renaming all these buildings that were named after racist Democrats like Russell.