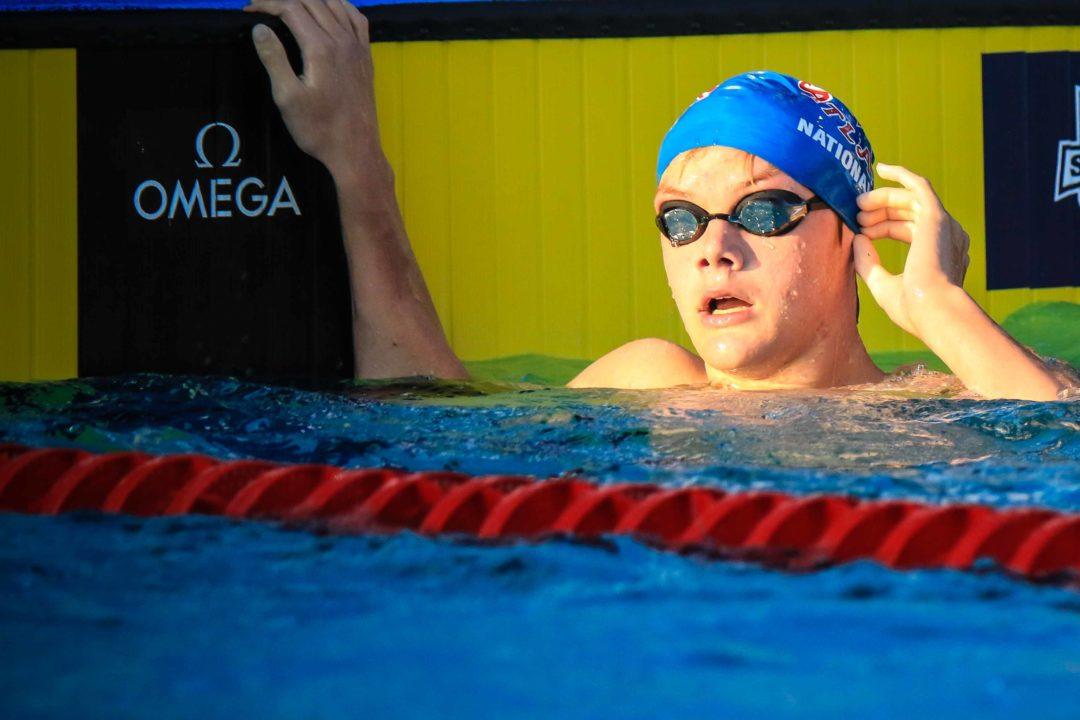 Magahey made a name for himself over the Summer after he scared Caeleb Dressel's LCM 200 free 15-16 boys National Age Group Record at Junior Pan Pacs, swimming a 1:48.65. Stock photo via Jack Spitser

SwimAtlanta 17- year-old and high school junior, Jake Magahey, blasted a 4:14.61 to win the boys 500 free at the Winter Juniors – East Championships. Magahey, SwimSwam’s #3 recruit for the Class of 2020, dropped a little over 2 seconds from his previous best to finish just ahead of SwimMAC’s John Walker (4:15.02). Magahey’s time lands him #10 in the all-time rakings for 17-18 boys, while Walker’s comes in 12th. Magahey only split above 25 seconds for a 50 4 times during the race, the slowest of which was a 26.15. He also came home under 50 seconds on the last 100, indicating he should close well in his other freestyle races this weekend.

Here’s our coverage from the Winter Juniors – East Live Recap, as reported by Anne Lepesant:

“SwimMAC Carolina’s Jack Walker, who came in to the final with the top time out of morning heats, got off to a quick start. He led the field by a body length at the 200 with 1:40.80. Behind him, SwimAtlanta’s Jake Magahey and Gator Swim Club’s Julian Hill were even, and a good couple seconds ahead of the rest of the finalists. Over the final 200 yards, Magahey made his move. He cut Walker’s lead to half a body length at the 400. The pair began their bell lap on nearly even footing, and it was Magahey who pulled out the win. He brought it home in 24.45 to eke out a 4:14.61-to-4:15.02 win over Walker, only missing Jack LeVant’s meet record by 21/100.”

Magahey is currently uncommitted to a college for the Fall of 2020, along with our #2 rank in his class, Destin Lasco. The #1 ranking recruit, Carson Foster has given his verbal to Texas.

Lives in Georgia, a great middle distance freestyler. Georgia historically has great success with those types of swimmers.Also imagine a recruiting class with him and gianluca at the helm. WOW.

Wherever he goes, Jake is World class both as a swimmer & a person. WTG Magahey

Crazy that a junior being uncommitted in December is remarkable. Sports changing.

It’s just not. Being uncommitted in December is typical. For a potential world-class swimmer it is atypical, given he is the #3 seed for class of 2020

Or Florida or Michigan or IU… the list goes on.

3
-3
Reply
JP input is too short
Reply to  Socrateshatesoliveoil

The two best 200/500 guys in last year’s class ended up at Texas and Stanford.

He’s a junior in high school. Who cares where he commits to at this point?

Most of us, probably.

Magahey is a plausible prospect of World-class 200 and 400 LC freer, an absent figure in Usa Swimming in the last decade.

2
-13
Reply
JP input is too short
Reply to  nuotofan

Are… are those not “world-class?”

26
-3
Reply
SwimGeek
Reply to  JP input is too short

Now do backstroke. There’s a contrast.

3
0
Reply
Pvdh
Reply to  JP input is too short

The US success level is so high, that looks weak by comparison. In reality is an amazing level and amazing consistency. Every other country would be blowing smoke up their own behind if they could get results like that.

7
0
Reply
nuotofan
Reply to  JP input is too short

Thanks for your effort, but useless display of names.
I was considering a World-class 200-400 LC freer (combo of the two distances): so no Phelps, no Jensen, no Lochte, no Jaeger, no McBroom, no Haas, no Grothe.
There are just two swimmers remaining: Peter VDK and Conor Dwyer, that I well reminded.

Another reason to NOT write other comments.
In that list of JP who won medals BOTH in 200 free AND in 400 free? One swimmer: Peter VDK. Two bronzes in 4 years.
This is what I (simply) meant when I wrote that comment.

0
-1
Reply
JP input is too short
Reply to  nuotofan

Oh, ok. So you’re saying my list is useless because you’re arbitrarily discounting swimmers that are good at other events too?

So, I guess you’re left with… Paul Biedermann and Alexander Krasnykh… Read more »

9
-1
Reply
nuotofan
Reply to  JP input is too short

“Arbitrarily discounting swimmers that are good at other events”??
And an interminable post, “surrealistic” in its development considering what was my thought (essentially praising Magahey and considering a specific category of swimmers) for what?
To remember me that it’s way better not writing comments on this site?
Mission accomplished.

Hes got to have the GOATs in either Berdino, Reese or Taylor on his radar

Kinda random, but I wonder if these top 10 recruits are getting full rides when they commit to places like Cal or Texas?

I could imagine those two teams (maybe others depending on the year) not being able to give even top 10 recruits full rides because of the limited scholarships and how deep the teams are. And if that’s the case, could possibly be a hard decision for the recruit. Go to the top tier program or get a full ride elsewhere?

Not saying this applies to Magahey, I’m just musing about the recruiting process in general. It’d be interesting to see what qualifies as ‘full ride material’ for any given school. I’m sure the coaches have to break… Read more »

Yes, I’ve wondered the same with Stanford women the past few recruiting classes. Before Manuel and Ledecky went pro, I have no idea how they had enough scholarship money. They were likely on full rides (although Ledecky’s family is wealthy so potentially she declined a full ride). Ella Eastin’s performances warrant a full ride. Ally Howe was the American record holder. Kassidy Cook is an Olympian. Janet Hu was a 25 time All-American and the backbone of all of the relays. Katie Drabot has qualified for Worlds. That’s seven athletes deserving full rides right there. And men’s teams have it even harder with fewer scholarships.

He’s from SwimAtlanta, in Atlanta, Georgia, which is not North Carolina. He’s visited UGA though.

I’d like to see him end up at Florida. I’m pretty sure they’ve had more guys go 1:47 or better in the 200 free than any program. If you look at the chart below, all of our placers in the 2012 Olympics in the 2/4 were Gators at the time, so they clearly know how to train for it. There was a 4 year run where three different Gators won the 200 free at NCs. He’d also have Trey Freeman to train with, who is going to be a big deal in the 200/400 in the years to come. He’d be the first big recruit in the Nesty Era.