Townley on Lilly King: “It’s kinda hard to put into words how great she is” 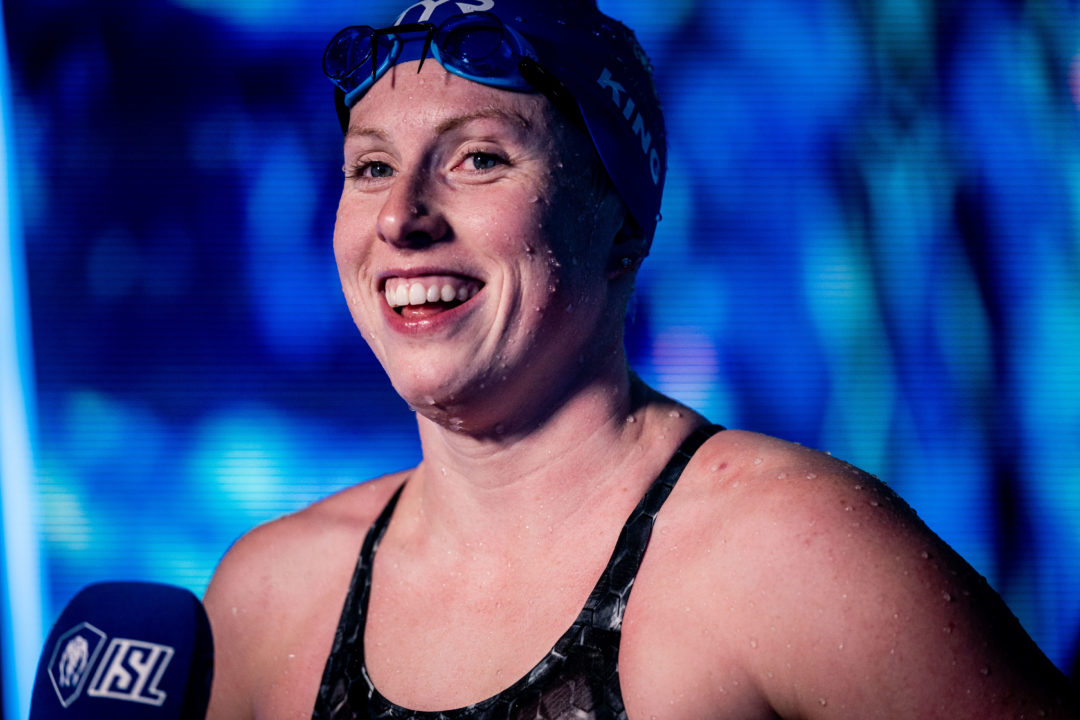 After raising her undefeated streak to 30-for-30, Cali teammate Townley Haas is practically speechless at her performances across this season Current photo via Courtesy of Mine Kasapoglu for ISL With permission

King took care of business with a solid win here, but it wasn’t a great showing for Cali. King was just 29.7 – she was 29.1 in the opening round of skins in Cali’s first meet. And Hannis, who was second to King in the skin week 1 and who almost beat King in the 50 breast yesterday, missed the cut and is out.
London got two into the second round, including world record-holder Alia Atkinson.
Tokyo’s Reona Aoki also made her second skins semifinal.

As expected, it’ll be King and Atkinson to the final. Each was undefeated in their ISL careers in the 50 breast coming into this meet. King has won all three 50 breaststrokes between the two this match. So far, though, King’s times have been a bit off and she hasn’t pulled the kind of jackpots she could potentially pull. But with both King and Atkinson among the best to ever swim a 50 breast, both are probably making sure they have something in the tank for the final.

In hindsight, both athletes were definitely saving their best stuff for the final. King went seven-tenths faster in this final than she did in either of the opening rounds, and Atkinson was four-tenths faster with her first sub-30 swim of the skins.

This was definitely a strategic showdown between the two, with both taking advantage of a thin field to save up for a huge finals showdown.

In fact, King was faster here than she was in winning the individual 50 breast yesterday (29.20).

Surprisingly, I really quite like her. She is awesome ( and I’m not from the USA).

I would die for both of them

In the beginning, God created Bloomington, Indiana. In the middle of this charming town, he put Indiana University. God said, “this is beautiful and good.” He then blessed IU with a swim team and said, “this program will achieve greatness and I will always be with them.” God gave IU a legendary “Doc” as a swim coach and a man that swam faster than people run by the name of “Spitz”. Spitz would move the heavens and the earth in a town called “Munich” and conquer the world seven times in one place and one period. IU attained championship glory and was dominant and God said, “this is very good!” Unfortunately, IU would later take for granted Gods blessings and… Read more »

Me too, & I WENT to IU Bloomington in the Doc era.

You need a twitter page or something… actually kind of entertaining

can someone make a list of swimswam’s most iconic users?

I miss him, hope he’s okay

He hasn’t recovered from realizing that Dressel swimming sprint breaststroke in a bath tub in college didn’t ruin him. Or that U.S. women (hello, Simone) not emulating Cate Campbell’s training didn’t exactly doom them to failure.

Anyone else have sudden motivation to make it on that list

STOP. your posts are getting ridiculous.

This should be its own article. Op-Ed of course, but like. Dang.

I thought it was running out of steam but then “a genius film expert with limited lung capacity” made me laugh out loud.

“They were doomed when, led by Guerra, they ignored Pestilence, the First Horseman of the Apocalypse, and practiced herd immunity. Soon they were visited by Famine, War, and Transfers.”