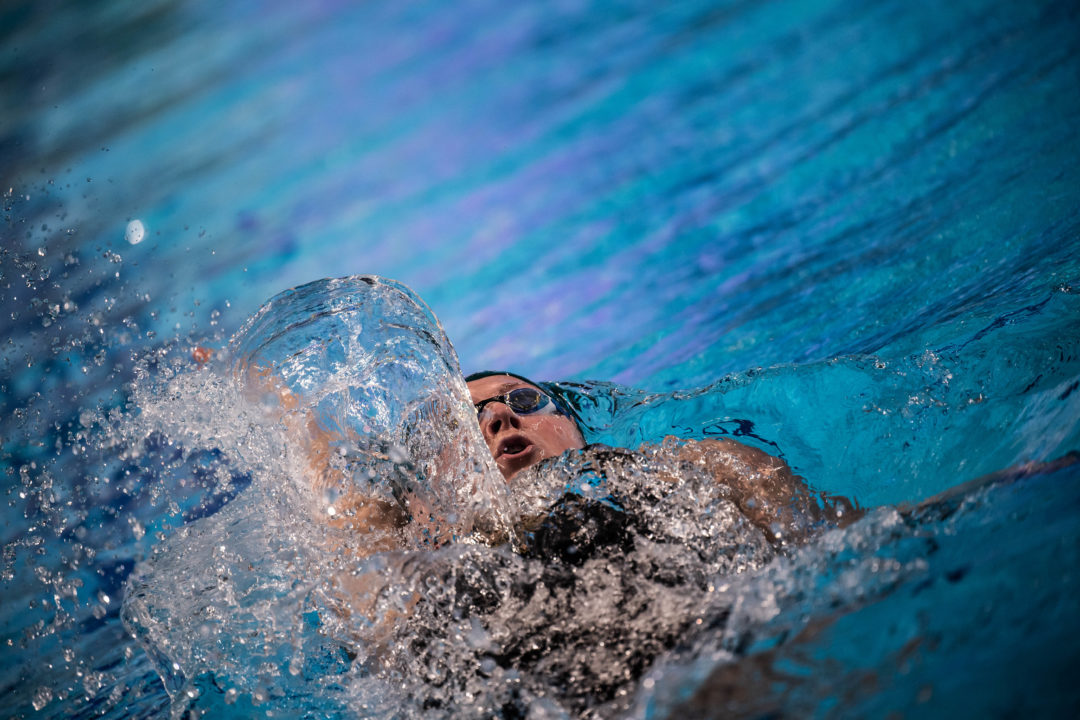 Check out the solid performances produced by the likes of Kira Toussaint (NED) and Nicolo Martingenghi (ITA) tonight to close out the Geneva International. Archive photo via Mike Lewis/Ola Vista Photography

Two-time European Short Course champion Kira Toussaint of the Netherlands took down the Geneva International Meet record in the women’s 100m backstroke to close out the 3-day meet.

The 26-year-old first produced a morning swim of 1:00.50 to take the top seed, overwriting the meet record of 1:01.32 Carlotta Zavkova put on the books back in 2018. Then in tonight’s final, Toussaint touched in a super solid 59.85 to reap the top prize in the only sub-minute time of the field.

Splitting 29.17/30.68, Toussaint defeated the field by well over 2 seconds en route to posting a time just outside the top 10 performance of her career.

The Dutch ace has already been as fast as 58.91 this season, a time she logged en route to a new national record last December in Rotterdam. That outing ranks her as the 2nd fastest performer in the 100m back this season, sitting only behind Aussie Kaylee McKeown’s 57.93.

Also in the water to close out this Geneva international was Italian Olympic icon, Federica Pellegrini. The 32-year-old veteran, who has been competing at this meet since she was just 14 years of age, won the women’s 200m free with ease in 1:59.07.

Although a pedestrian time for the 2019 world champion in his 2free event, Pellegrini’s result here was enough to beat the field by well over 2 seconds.

Her countryman Nicolo Martinenghi followed up his 50m breast win from yesterday with another victory this evening, topping the men’s 100m breast podium.

After watching Dutch swimmer Arno Kamminga clock a new meet record to claim the top seed this morning in 59.36, 21-year-old Martinenghi soared to the wall in a time of 59.10 to secure gold in the final.

Opening in 27.71 and coming home in 31.39, Martinenghi produced the 3rd fastest time of his young career.

Martinenghi owns the Italian national record with the 58.75 he logged at the 2019 Italian Winter Championships. His next quickest is represented by the 59.01 he recorded at the 2017 World Junior Championships, a time which still remains as the World Junior Record. Last December he was 59.31 to take the national title in Riccione

As such, his 59.10 here is now his #3 quickest and keeps the Italian ranked as the 4th fastest 100m breaststroker in the world this season.

Kamminga wasn’t too shabby in tonight’s final either, however, stopping the clock in a time of 59.21 to get under the aforementioned 59.36 meet record he registered in the heats. Kamminga is already the world’s fastest performer this season with his national record-setting 58.69 outing from December’s Rotterdam meet.

Host nation swimmer Nils Liess was the quickest 200m freestyle,r hitting a time of 1:48.83 tonight for gold. That was slightly off the 1:48.30 he scored in the AM heats, a time which checked in as a new meet record for the Swiss athlete.

Nyls Korstanje of the Netherlands cracked a new national record in the men’s 50m fly en route to topping the podium. The NC State Wolfpack touched in 23.32 to score a new PB and Dutch standard. You can read more about Korstanje’s outing here.

Additional winners included Giacomo Carini of Italy taking the men’s 200m fly in 1:58.95 while Yohann Ndoye Brouard of France topped the men’s 100m back in 53.92. Brouard’s time falls just .07 outside of the FINA ‘A’ qualification time needed for the 2020 Olympic Games, although he’s already been as fast as 53.49 to hit the mark in Amiens last November.