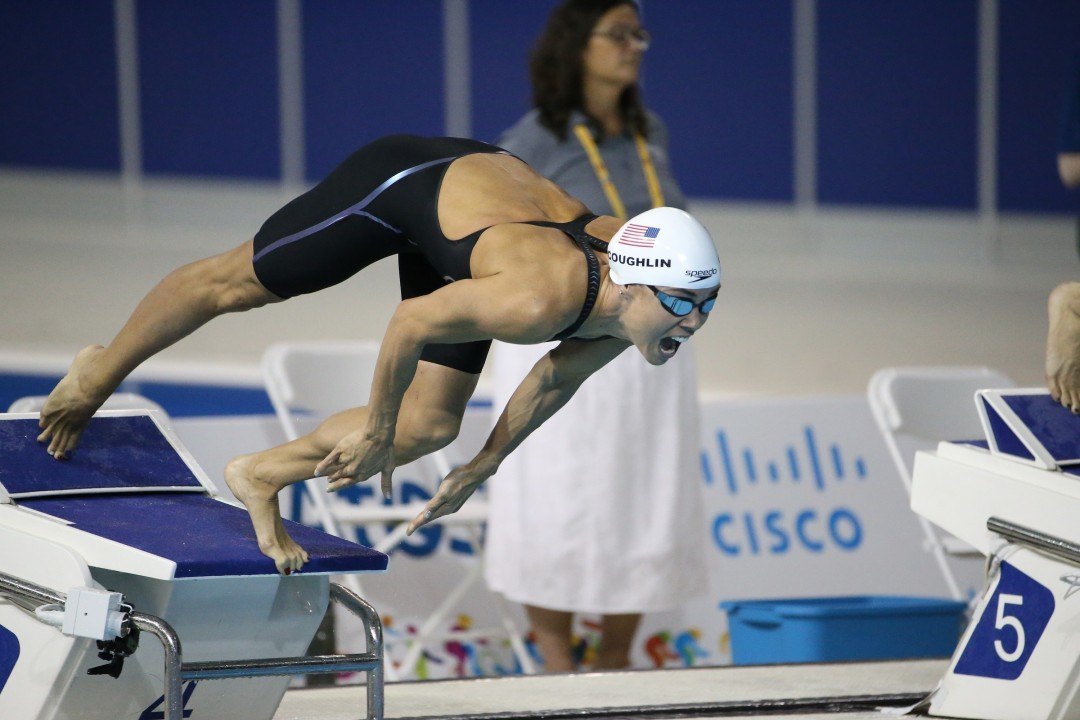 Everything's on the line for day five finals here at the Toronto 2015 Pan American Games. At this current point in time, the United States leads the swimming medal table with nine golds. Brazil has eight, Canada has seven. Current photo via \Chris tanouye/www.christanouye.com

Everything’s on the line for day five finals here at the Toronto 2015 Pan American Games. Not only will it be the final night of swimming, but it will give American swimming star Natalie Coughlin a shot at winning her unprecedented 60th international medal of her career.

Coughlin will be looking for gold tonight along with the rest of the American medley relay squad. At this current point in time, the United States leads  the swimming medal table with nine golds. Brazil has eight, Canada has seven.

Depending on the outcome of events tonight, any one of these three leading countries could take home the title as the top team at the Pan American Games.

Where the United States pulls ahead big time is the women’s 200m IM where the results could decide the competition. If Caitlin Leverenz wins, the Americans should claim the top spot considering how dangerous they are in the women’s 4x100m medley relay.

Canada’s hopes truly lie with 18-year-old Sydney Pickrem. If Pickrem can win, that will put Canada one gold ahead of the United States with the two relays left to swim.

Barring a disqualification, the American women will win the medley relay. There is no team with the depth that the Americans have in that swim. As for the men’s medley relay, the Brazilians look to be the favourites but the Canadians don’t have a weak squad either.

The Americans aren’t out of the picture in the men’s race, however and should be a lock for the top spot if they win both the women’s 200m IM and the 4x100m medley relay.

If one of those swims doesn’t go as planned, the Brazilians could tie them in total number of golds if they win the medley relay. In that scenario, the Americans would still be victorious due to the amount of silvers they’ve collected.

Sierra Schmidt of the United States went for the gold right from the get-go. She was a 59.82 on the first 100 and already at a body length lead, daring her competitors to catch her.

She was very strong for the first half of the swim, but then slowly Kristil Kobrich of Chile made a big move and started moving up on Schmidt.

Although the pressure was on big time from Kobrich, Schmidt never relinquished her lead and led the race from start to finish. On the last 100, Schmidt began to push even farther past Kobrich than she was before, extending her lead as she reached in for gold.

Kobrich was an easy second in 8:29.79 while Canadian Brittany MacLean and Venezuelan Andreina Pinto battled for the bronze. It was Pinto who managed to creep by MacLean during the last 2oo-meters and claim a podium spot.

MacLean was left to finish fourth in 8:32.06 out of a medal position.

Caitlin Leverenz of the United States looked almost untouchable tonight as the battled a tough field for gold in the women’s 200m IM.

Starting off strong as always, Leverenz was a 28-low fly split to take a sizable lead heading into the backstroke. The backstroke is her weakest stroke as a whole, but she managed to retain her lead with 100-meters to go.

During the backstroke leg both Sydney Pickrem of Canada and Meghan Small of the United States moved up big-time, getting closer to Leverenz.

On the breaststroke leg it was the three of them making moves ahead of the field with Leverenz well in front. Turning for home it was Leverenz, Small, Pickrem in that order.

Small and Pickrem were just 0.02 seconds from each other at the third wall, and although Pickrem put on a fierce effort she was just out-touched.

Leverenz won in 2:10.51 with Small and Pickrem right behind. Leverenz is ranked fifth in the world with that swim, Small is now ranked seventh in the world for her time, and Pickrem’s prelim swim keeps her ranked sixth.

Very rarely do you get to break somebodies record while they swim just a couple lanes away from you, but that’s exactly what Henrique Rodrigues did tonight against fellow Brazilian Thiago Pereira.

Coming home in a 28.60, Rodrigues passed Pereira and touched the wall in 1:57.06. With that time, he broke Pereira’s Pan American Games record from right under his nose. Pereira was also under his previous record in 1:57.42, but couldn’t best Rodrigues.

The race for bronze was strong between American Gunnar Bentz and Canadian Evan White. White made a huge move up on the last 100, putting himself into third by the 150.

Bentz came back on him with a swift 28.46 last 50 split to grab bronze. White was fourth in 2:00.60. Ty Stewart and Luke Reilly finished behind White in fifth and sixth respectively.

Ryan Cochrane led the men’s 1500m freestyle right from the beginning, never letting anyone get close enough to him to take the gold away.

Cochrane won the gold in a comfortable 15:06.40, swimming just about five-seconds slower than what he was at Canadian Trials in April. It was very clear that Cochrane was unshaved and unrested for this meet as world approach; especially when he showed up for finals with facial and body hair.

Cochrane’s closest competitor tonight was American Andrew Gemmell. Gemmell was a 15:09.92 to claim the silver medal.

Brandonn Almeida of Brazil ended up third with a new Brazilian national record time of 15:11.70

Natalie Coughlin’s backstroke is back to top form, which is one of the reasons the American women were able to win the medley relay tonight. Leading off in 59.05, that was the the fastest performance Coughlin has had since the Beijing Olympics.

Outside of the 2008 Olympic Trials and 2008 Olympic Games, Natalie Coughlin has never been faster in a 100-meter backstroke. With her 59.05 the also re-set her games record of 59.20 that she set in prelims and moved to third in the world this year.

Katie Meili kept things rolling for the Americans with a 1:06.06 beaststroke split. At that point they had a huge lead. Enter Louisville butterflyer Kelsi Worrell and things got even faster. With a 57.34 split, the Americans were untouchable.

Although Allison Schmitt managed a 54.08 freestyle leg, Canadian sprinter Chantal Van Landeghem made up a ton of room on the final 100. Van Landeghem dropped a massive 53.30 split to put the Canadians in a silver medal position.

The Canadians were just shy of the Canadian record.

The Brazilians and the United States were in a lock for gold tonight as the Canadians also fought to be deep inside the medal picture.

Incredibly, the Brazilians managed to lead at every single point during this race, never letting up despite how hard the Americans pushed. The Americans were consistently in second, the Canadians in third.

With that final gold medal the order was solidified in the medal tables. The Americans finished with 12 golds, the Brazilians 10, and Canada eight.

Argentina made major strides by hiring Bill Sweetenham (who was essentially the architect of the talent identification and tough qualifying standards that has put British Swimming back on the map) to work with their national team and coaches to re-engineer their swim program. Now that they can see their potential, they are only going up from here.

Canada has a core group of young females who are future stars led by Emily Overholt, Sydney Pickrem, and Kylie Masse. Does Pickrem plan to defer enrollment to Texas A&M until after the Olympics?

Mitch, seriously, please post the relay splits for the 3 first teams next to the results.
I have to go to another website to find them. It’s stupid.
And on the meet website we have to calculate.
Thanks for your understanding.

Back to that final day of competition.
Expected win for Sierra Schmidt. even if I hoped a better time that’s a good win. Disappointing Harnish.
Expected win for Caitlin Leverenz. Meghan Small confirms her talent. I picked her to make the olympic team for several months now.
Expected win for Cochrane. Good fight by Gemmell. And what a meet for the young Almeida!
Expected win for the US women’s medley relay.
… Read more »

Leonardo de Deus medaled in the 200 fly/back and 400 free. That’s a lot of versatility. He should be able to put together a decent IM. Unless he’s a Conger-type guy: world class fly/back/free and can’t physically do breaststroke.

Does anyone know what the line-ups are for the men and women medley relays in Kazan?

Typically To Be Determined based upon both results from earlier in the WC meet and if anyone threw down an amazing time trial in training camp. (Relay selection is from a pool of ‘any swimmer on the team in any event’ like it was here)

Not sure what you mean. it’s exactly like the old days. The teams are decided by who swims faster in their individual events, as long as those events precede the relay.

That was harsh. The internet feed ended abruptly before the medal ceremonies for the medley relays. LOL LOL LOL Wow.

Great splits for Nicol and Funk.

Good for Kisil considering his individual 100. Hopefully he and Wood are more focused on worlds.

I think Savard’s meet was somewhat disappointing for her but it wasn’t bad and she’s getting used to a bigger program.

U.S. lost that one, or Brazil won it in the backstroke. Take your pick.

CT brazil outsplit US by 0,5 on breast (and that was a bad race for França) only fly Giles outsplit arthur (by 0,3). Back and Free brazil was faster too..

Not sure what the splits were but I think Brazil won it on the backstroke. Guido learnt from the 100 back final. We went out too slow previously and did not have enough water to catch Thoman. He learnt his lesson and attacked from the start and had the endurance to come back. A good start always helps the other swimmers and Brazil never relinquished the lead after that.