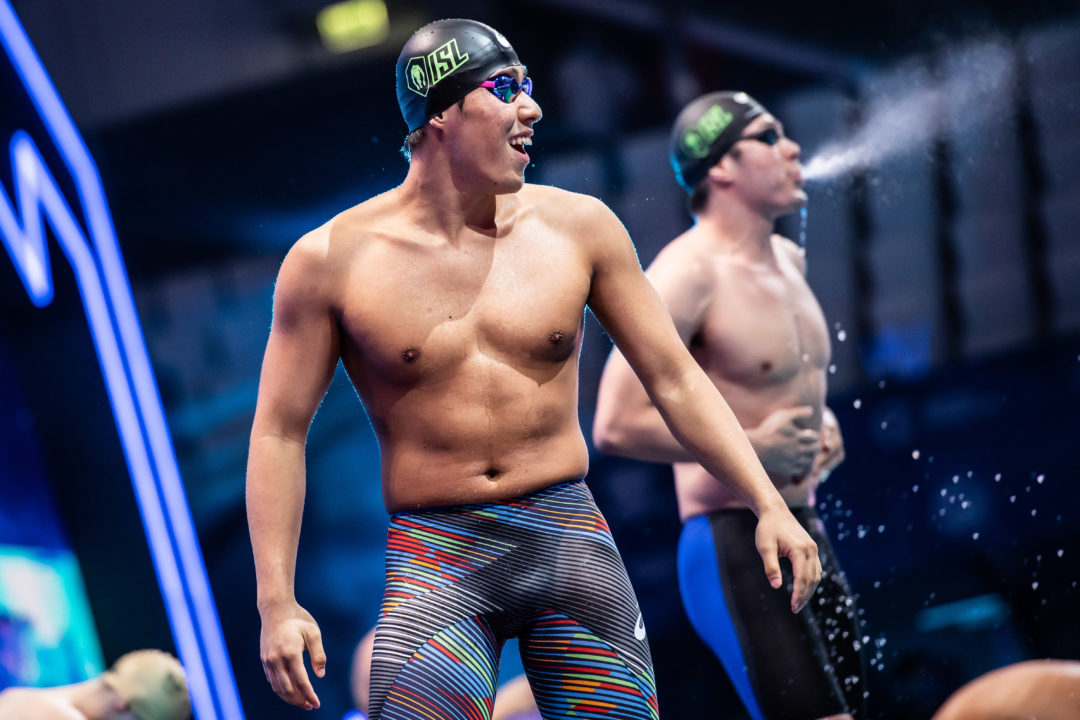 Although the Japanese big guns were in the water tonight in Chiba, the 2021 Japan Open is a non-selection meet, with the nation’s Olympic roster for a home-based Games already determined.

As such, the likes of Daiya Seto, Yui Ohashi and Kosuke Hagino put up modest performances, by their standard, while taking advantage of the racing opportunity.

For Seto, the man took on a grueling 200m fly/200m IM double in this evening’s finals session, with only one women’s race in between.

Leading the field was Tomoru Honda, stopping the clock in at super quick time of 1:54.59. That outing beats out the 1:54.88 result he logged at the Japan Swim, the competition which represented the nation’s sole Olympic qualifying opportunity.

There in Tokyo, Honda split 54.89/59.99 to qualify for the Games while tonight his splits included 54.71/59.88 to slice .29 from the former performance. In doing so, Honda’s 1:54.59 outing here bumps him up one spot on the all-time Japanese performers’ list. Honda frog-hops Yuya Yajima to now become Japan’s #6 performer all-time in this 2fly event.

Worldwide, Honda also scoots past Hungarian Tamas Kenderesi to check-in as the #3 200m flyer in the world this season.

Behind Honda was Daiki Tanaka who turned in a silver medal-worthy result of 1:56.43 while Nao Horomura got it done for bronze in 1:57.23.

As for Hayashi, she captured the bronze medal at the Japanese Olympic Trials, posting a mark there in Tokyo of 2:08.76. Prior to that outing, in October of 2020 Hayashi was as quick as 2:08.56 at the Japan Inter-Collegiate Championships.

As such, with tonight’s performance, Hayashi now enters the list of top 10 performers worldwide this season and becomes Japan’s 7th fastest female all-time.

Doubling up on his 200m freestyle victory from earlier in the meet, Katsuo Matsumoto also took the 400m free in a time of 3:46.88. Winning the race by over 2 seconds, Matsumoto raced his way to a new lifetime best, crushing his previous 4free PB of 3:49.52 from last December.

Tonight, with his sub-3:47 outing, Matsumoto becomes Japan’s 3rd fastest performer all-time, sitting only behind national record holder Hagino (3:43.90) and Takeshi Matsuda (3:44.99). Matsumoto’s 3:46.88 would have taken the gold at the Japanese Olympic Trials.

Was skim reading this, saw Irie 1:59.04, thought huh that seems kinda slow for the ever-consistent backstroker.

Flicking through the splits, 30.00 on the backstroke is (relatively) pedestrian, but he closed in 27.94 on the freestyle!

Seto used to put crazy times even when not tapered, i’m really worried if he really found his early 2020 form or not

He did have a large scandal in japan, which got him removed from his team, and with the effects of the pandemic had some clear effects on his swimming, as well as his morale. However, it is still two months or so until the games and we just have to hope that he pulls through. he has a wife and child so he will have to perform at his best for them also as well as for our country.

Milak´s time is not updated, Swimswam 🙂 1.15.10 at the Euros is his fastest time this year.