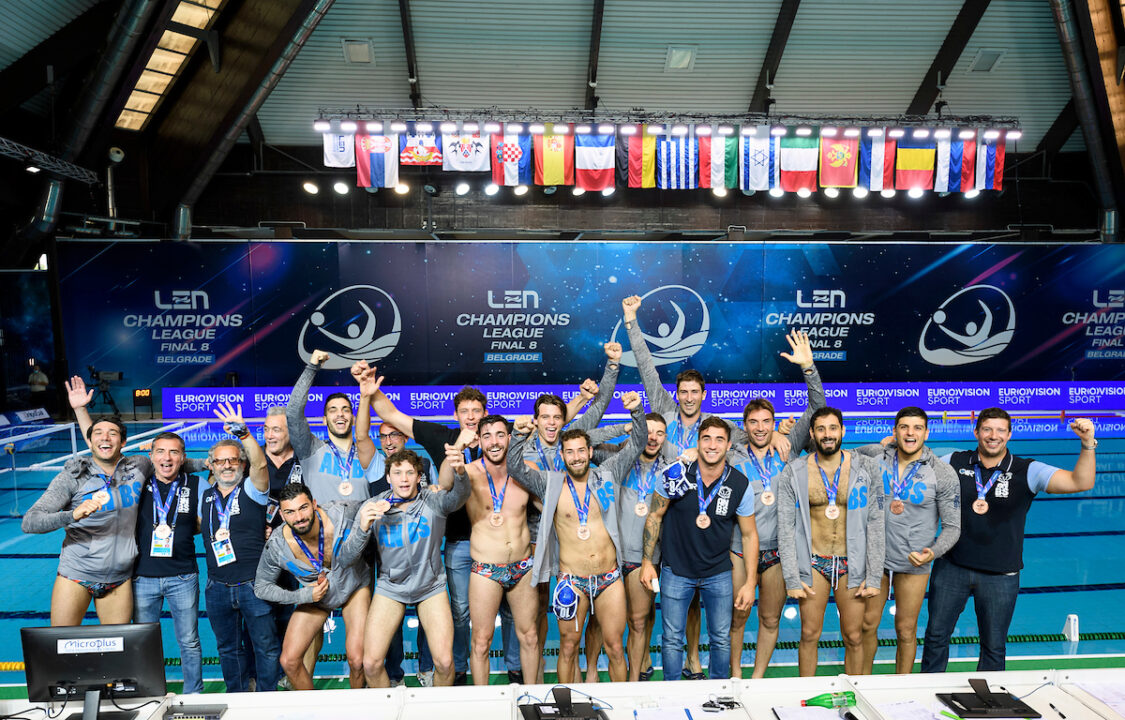 Just like in the semi-finals, Recco’s physical superiority brought its golden result in the final too as they topped title-holder Ferencvaros, 9-6. Current photo via Giorgio Scala / Deepbluemedia / Insidefoto

Just like in the semi-finals, Recco’s physical superiority brought its golden result in the final too as they held title-holder Ferencvaros on a single goal in the entire second half. Thanks to this well-deserved 9-6 victory, the Italians further improved their record and claimed their 9th Champions League (European Cup) triumph, the first since 2015. After winning three European cups in three years (Euro Cups in 2017 and 2018, this trophy in 2019), Ferencvaros now have to settle for the runner-up position while Brescia earned an easy win over Barceloneta to claim the bronze medal, their best-ever showing in this competition.

Recco’s intensity especially in their aggressive and well-organised defending was the key in beating title-holder Ferencvaros in Belgrade. The Magyars, who netted 14 goals in their previous two matches apiece – in the semis against Brescia which had topped Recco for the Italian title –, this time couldn’t come up with their sparkling offensive play and fell a somewhat similar way as Barceloneta had done a day earlier. While the first half was even, they stood 5-5, in the second it became more and more visible that the Magyars were running out of gas as they were unable to score for 15:58 minutes. Marko Bijac was instrumental in Recco’s success, the Croatian goalie posted 13 saves, though the brilliant defence in front of his goal let him make easier-than-usual stops.

An early double in 47 seconds in the third for 7-5 boosted Recco’s confidence and even though they also had a relatively longer phase without netting a goal but since they denied all the attempts of their rival, they could afford not to score for 11:04 minutes. Then came another two in 73 seconds for 9-5 – and it was over with 3:14 remaining. Dusan Mandic netted two crucial goals during this 4-0 rush, the Serbian leftie was named the MVP of the F8.

Ferencvaros could pull one back but only avoided to be entirely shut out in the second half – they couldn’t come closer so Recco could start the celebrations, something they have been waiting for since 2015. In a moving scene, the club’s living legend Eraldo Pizzo also lifted the trophy with the players – he was part of Recco’s first winning side back in 1965. Now he saw his beloved club making it for the 9th time – so now Recco is leading by ‘two’ in the all-time ranks ahead of Mladost (CRO) and Partizan (SRB), and with some new signings they will be definitely ready for the 10th next season.

Italy enjoyed a great day as Brescia crowned its historical first-ever march to the top four by clinching the bronze medal. The Italians were superior throughout the match, after the Spaniards took the lead, they replied with seven unanswered goals and after 1-7 there was no way back for Barceloneta. Till the middle of the third, the Spaniards could score only three penalty-goals (after their opening action shot) – their sparkling attacks did not click this afternoon. This also means that after three victorious bronze medal matches, Barceloneta lost two in a row, and just like in 2019, against an Italian side once more.

The games for the lower places offered some entertaining moments, with 27 and 25 goals respectively. Jug kept its 5th place from 2019 with ease against Hannover, a 6-0 rush in the second period decided the outcome by halftime. After two days of miseries, Olympiacos managed to show some better moments though Marseille came back from three goals down to equalise three times but the Greeks managed to score the winner at the end.

If the pandemic does not return requiring tougher measures, the next season of the Champions League will switch back to the 16 teams format and the games shall be played on the usual home-and-away basis. The Final Eight is to be played here in Belgrade again, though due to the busy competition calendar, it’s scheduled for the first weekend of July.

The final started with a man-up battle, Recco missed two and netted one and a half – the second came after the 6 on 5 was over, and Ferencvaros did something similar, a quick play and a late one after a rebound. En route, they missed one for 1-3, soon a 6 on 4 for 2-3 – Bijac delivered a couple of fine stops – so it remained 2-2 and when Figlioli sent the ball home from their next extra, Recco could regain the lead at 3-2. The Magyars couldn’t play well their last one in this period (stood 1/6) and Some Vogel needed a huge save on the ensuing one-on-one to keep his team close.

The youngest in the field, Vendel Vigvari broke the ice for the FTC with a brilliant bouncer from the opening 6 on 5 in the second but Aaron Younger’s shot went in from the block to put Recco back in the lead. Gonzalo Echenique hit the post from the next man-up, at the other end Marton Vamos delivered from the right wing so it was 4-4 with 4:00 on the clock. The extra-party went on, Francesco di Fulvio hit with a one-timer, but Nikola Jaksic made one dunkfinish for 5-5. Vogel came up with fine saves in crucial moments while the Hungarians missed a 5 on 4 so it was even at halftime.

Echenique’s ball made its way to the net under Vogel’s arm, then Dusan Mandic netted the first ‘real’ action goal of the match and with that double in 47 seconds Recco led by two for the first time at 5-7. Denes Varga tried his luck but Bijac denied him, like Vogel did with Echenique. A series of key moments came when Recco had a 6 on 5 for +3 after a killed man-down but a block saved Ferencvaros. Then Jaksic was also denied after a time-out, though Vogel made a stop on Mandic’s shot from the next extra too.

The teams were visibly running out of gas – they had a couple of enormous battles behind them –, so the attacks lacked precision. The Magyars wasted another extra without taking a shot, while the Italians also lost from their dynamics. Their outside shots were easy feeds to Vogel who also made a big save in the last Recco man-up in this period.

It was telling, that Ferencvaros’ scoreless phase counted 10:58 minutes as the last period started and Recco was also without a goal for 6:31 minutes – but they had a 7-5 lead and that was quite promising for the record-holders with eight more minutes to play.

When Vigvari was blocked in a 6 on 5, it was somewhat visible that Ferencvaros wouldn’t have enough in the tank to produce a miracle (they played with 12 players because of a disciplinary decision from the semis) – they could barely rise above water level even in man-up. Bijac also had some fine stops on the perimeter attempts so all Recco needed was to wait for the first real chance. It arrived in the form of a 6 on 5 and even though it was over, Mandic still had some time to send the ball home with 4:27 to go. Soon it was 9-5 from their next 6 on 5 as di Fulvio’s ball went in from Vogel’s arm.

Nicholas Constantin-Bicari’s nice backhander from the centre 3 minutes before the end was good only to halt Ferencvaros goalless run at 15:58 minutes. It turned out to be their single goal in the second half, though, as Vamos hit the post from their next man-up and later he was also denied by Bijac at a penalty – the Croat posted a 68.4% saving percentage, a winning stat indeed. On the contrary, the three lethal weapons of the Magyars were way off their best: Vamos was 1/8, Zalanki 0/4, Varga 0/4 – 1/16 combined, with such shooting percentage this game was a mission impossible for the title-holders.

The bronze medal match produced one of those scenarios, which sometimes happens in the contest of two disappointed sides. If one catches the right wave and manages to build a big lead, the other may find it a mission impossible to battle on.

Here in Belgrade, Barceloneta took the lead early but then Brescia, playing only with twelve players due to a disciplinary decision, netted three in a row in the first, including two from counters while the Spaniards seemed to lack the necessary reserves to play their high intensity game. The semis against Recco worn them out and it became more and more visible already in the second period. Their attacks didn’t click while Brescia added two fast hits in 27 seconds for 1-5, which put the Spaniards to the floor. Soon it was 1-7, leaving little doubt that this game could go only one way this afternoon.

Barceloneta could score again after 10:30 minutes, though they could not come much closer later either. It was telling that they were trailing 4-10 in the middle of the third and three of their four goals came from penalties (the first was an action goal). Soon they could add some more but Brescia also netted the ‘necessary’ amount, thus the gap remained the same till the end. It was another significant piece of stats that the number of shots on target was 23-14 to the Italians, who were fitter and perhaps still hungrier. Understandably, since this was their first trip in the top flight but also a swansong for many players and they managed to make the farewell a memorable one.

The game for the 5th place turned into a lopsided battle in the second period. The first was still balanced, Jug led 3-2 but in the second they switched gears, tightened their defence and staged a 6-0 rush, which decided the game by halftime. The Germans, frozen in offence for 8:05 minutes beforehand, climbed back a bit after 9-2 to 10-5 but couldn’t recover from that blow till the end. With nothing really big at stake, the game turned into an attacking feast with 65 shots at the end (29-36 to Jug) and 27 goals in total.

Unlike in its previous two games, Olympiacos showed up in the pool right from the start and took a 5-2 lead in eight minutes in the match for the 7th place. However, in the second they got lost somewhat in front, scored their first after 5:44 minutes while Marseille geared up and came back to 7-6 by halftime.

Soon they caught up the Greeks at 7-7 but Olympiacos responded well, with a double in 53 seconds, but towards the end of the third Marseille had the upper hand and equalised once more at 10-10. Still, an action shot gave a single-goal lead for the Greeks before the last break. After three minutes of battling, Olympiacos scored first for 12-10 and they even had a man-up for +3 but missed it. That opened the door for an exciting finish and Marseille levelled the score for the third time. Though the calls – a penalty in a man-up, then a 6 on 4 – caused uproars from the Greek bench but it didn’t disturb Andrija Prlainovic and Igor Kovacevic to make it 12-12 with 2:53 from time.

Olympiacos earned back-to-back man-ups at the other end, and even their first shot was well saved, their US player Hannes Daube hit a great goal from the second extra for 13-12. It turned out to be the game-winner as the French couldn’t penetrate Olympiacos’ defence in the remaining 1:48 minutes, while the Greeks used their possessions wisely to avoid a shootout at the end.