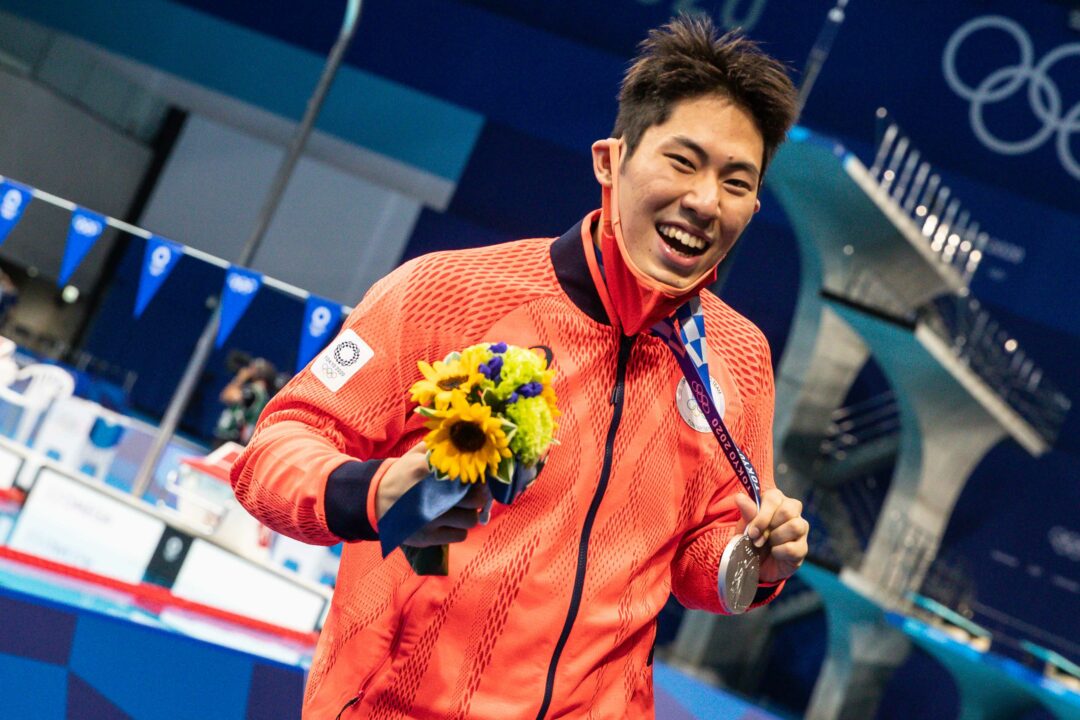 On the women’s side during day 4 of the Olympic Games, Yui Ohashi became the 7th straight double IM champion, with the Japanese ace adding a 200m IM gold to her 400m IM win earlier in the meet. You can read more about Ohashi’s feat here.

But on the men’s side, it was Tomoru Honda‘s time to shine, with the 19-year-old powering his way to the silver medal in the 200m butterfly. Hitting a final time of 1:53.73, Honda knocked just under a second off of his previous personal best, a mark which rested at the 1:54.59 he registered at the Japan Open this past June.

Taking the gold was Hungarian world record holder Kristof Milak (1:51.25) while Italy’s Federico Burdisso got it done for bronze in 1:54.45.

Honda’s silver helped alleviate the shock that national record holder Daiya Seto missed out on the final, just as he did previously in his favored event of the 400m IM.

After the race, teen Honda stated to Kyodo News, “I swam my ideal race and won a silver medal on top of that, so I’m really happy. I think I was calm in the first half (of the race) and all I needed to do was have a strong second half, and I feel that I raced really well.

“I was nervous but I told myself I would have more fun than anyone else, so I soaked it all in from when I entered the arena.”

The Japanese team must have overtrained at the last minute or something. Otherwise their overall performance (excepting Ohashi and Honda) doesn’t make any sense, especially given the theoretical “home pool advantage.”

Japan is a collectivist society, meaning we prioritise society over our individual selves, so I feel like having a home crowd cheering us in the stands would’ve had more of an effect on the athletes more than the athletes from other countries.

I’m partial to Honda, always had been 🙂

Awesome to see how happy Honda was with his silver!

Sato has almost zero experience swimming on the international stage as far as I know. Honda has swam at world juniors before and internationally so he has decent experience as a junior going into senior, but did not expect him to come flying into second after that great last length

It was pretty funny to compare the reactions between Honda and Milak after that 200 fly.

feel like the coaches / jap. federation screwed up something to have such a lacklustre performance at their home turf so far, ohashi and honda aside. guess we’ll see if hagino can pull it off in the 200IM, but have 0 hopes for seto now sadly. hope he has another cycle in for him cuz this games just really sucked for him.