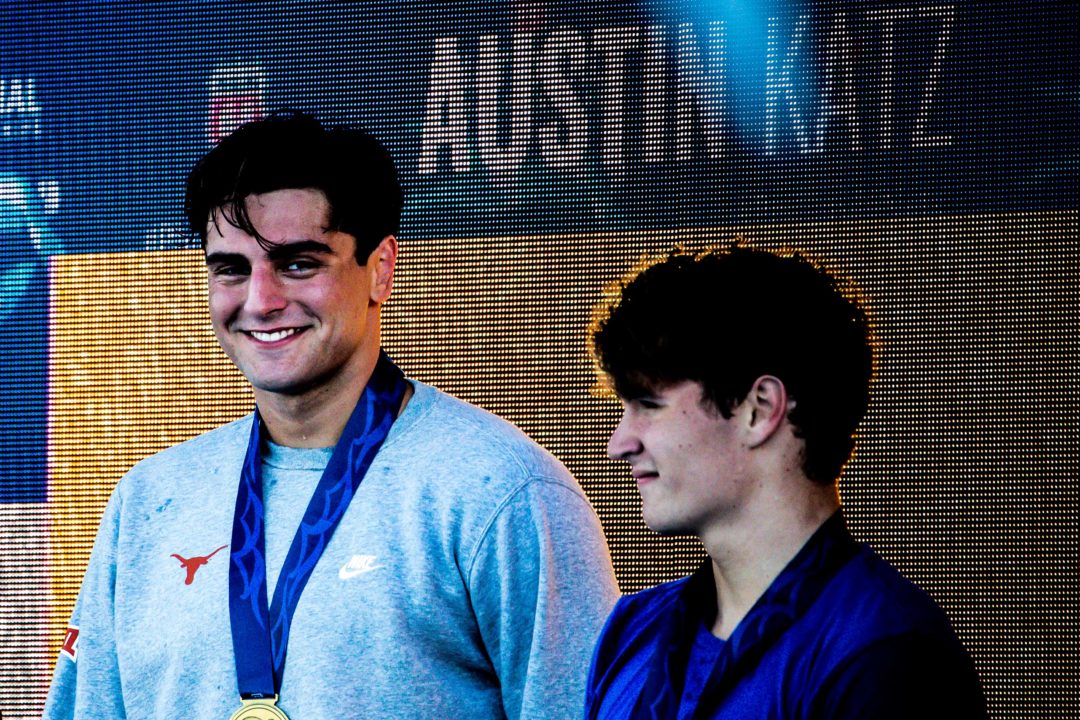 The University of Texas is all over the psych sheets here, whether it's with current or former members of their NCAA program. Current photo via Jack Spitser/Spitser Photography

The University of Texas is all over the psych sheets here, whether it’s with current or former members of their NCAA program; many UT alums now train in Austin with Longhorn Aquatics. Due to the Longhorn presence, some events at this U.S. Open site look more like a Texas intrasquad than anything else. For example, in the 400 free, the top eight swimmers are current or former NCAA Longhorns.

Drew Kibler, Carson and Jake Foster, David Johnston, Austin Katz, Caspar Corbeau, Daniel Krueger, Chris Staka and Alvin Jiang are among the top current collegiate Texas swimmers expected to compete in San Antonio next week on the men’s side. Among their post-grad group are Jeff Newkirk and Jack Collins.

Madisyn Cox, a Texas alum now with Longhorn Aquatics, is the biggest name on the women’s side. Joanna Evans is another former Longhorn collegiately now competing with Longhorn Aquatics, while the Texas NCAA group racing next week is highlighted by Kelly Pash, Evie Pfeifer and freshman standouts Olivia Bray and Anna Elendt. Cal sophomore Ema Rajic, who lives in Austin on college breaks, is swimming next week unattached.

15-year-olds Jillian Cox (Austin Swim Club) and Cooper Lucas (Lakeside Aquatic Club) are two big age group names to lookout for, along with 16-year-old Lydia Jacoby, the 2019 U.S. Junior National champ in the 100 breast, who trains with Seward Tsunami Swim Club all the way in Alaska.

Does he still swim?

I saw him coming regularly to Austin Swim Club with other pros this summer, so I assume so