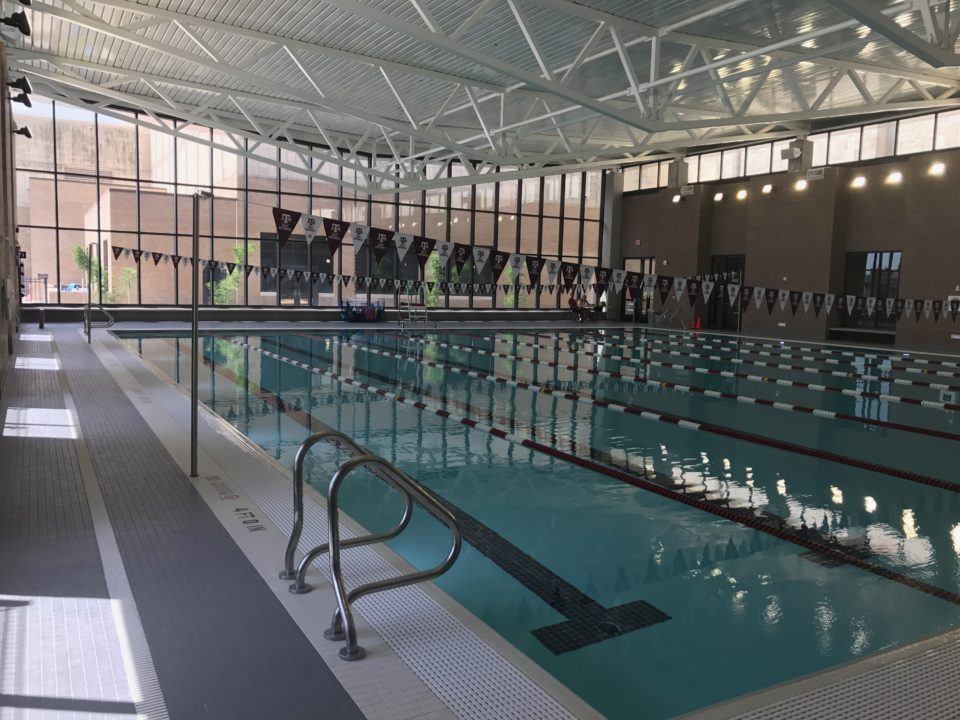 Texas A&M’s new pool is open for business. The new 8-lane, 25-yard fixed wall pool may not measure up in... Current photo via Jason Calanog

Texas A&M’s new pool is open for business. The new 8-lane, 25-yard fixed wall pool may not measure up in terms of impressiveness to the student rec center’s primary natatorium, which hosted both the men’s and women’s NCAA Championships in 2009, it will provide much-needed relief of lane space for the school.

The provides plenty of natural light and is in a separately-housed building from the primary natatorium. It gives A&M now 4 functioning pools on campus:

Even with a ton of pool space already, there were tons of conflicts at the A&M natatorium. Besides the varsity swimming teams, whose men’s and women’s programs finished 16th and 3rd at last year’s NCAA Championships, the pools also host training classes for the school’s large ROTC program, club water polo and swimming programs, intramural sports, physical education classes, sectional championships, club meets, and student enrichment courses like scuba diving. That doesn’t include the 66,425 on-campus students. In any given year, it is one of the top 3 largest campuses in the United States.

The new pool is shallow, and doesn’t have blocks, but still will serve as vital water space when the school is hosting big meets.

“When we host a big meet like SECs or the NCAA Championships, we displace a lot of groups that use the pool,” Recreational Sports senior associate director Rick Hall said. “Rec swimmers, kinesiology classes, clubs like our water polo club.” The new pool is aimed at providing a space for those groups without taking pool time away from the competitive swimmers.”

The pool, which was part of a $33.5 million upgrade to the school’s rec center, is estimated to have cost around $4 million. Also attached to the project was refurbishment of the two bulkheads in the primary 50 meter pool.

The school is one of many looking for inexpensive ways to relieve congestion in their primary competition pools. Facilities like this and the one built at LSU, while not ideal for elite competitive racing, provide a viable, inexpensive alternative to meet the needs of their populations without pricing their varsity teams out of the water to cover costs.

Texas seems to value all sports more than the rest of the country.

That would give me a serious case of Aquatic Centre Phobia .