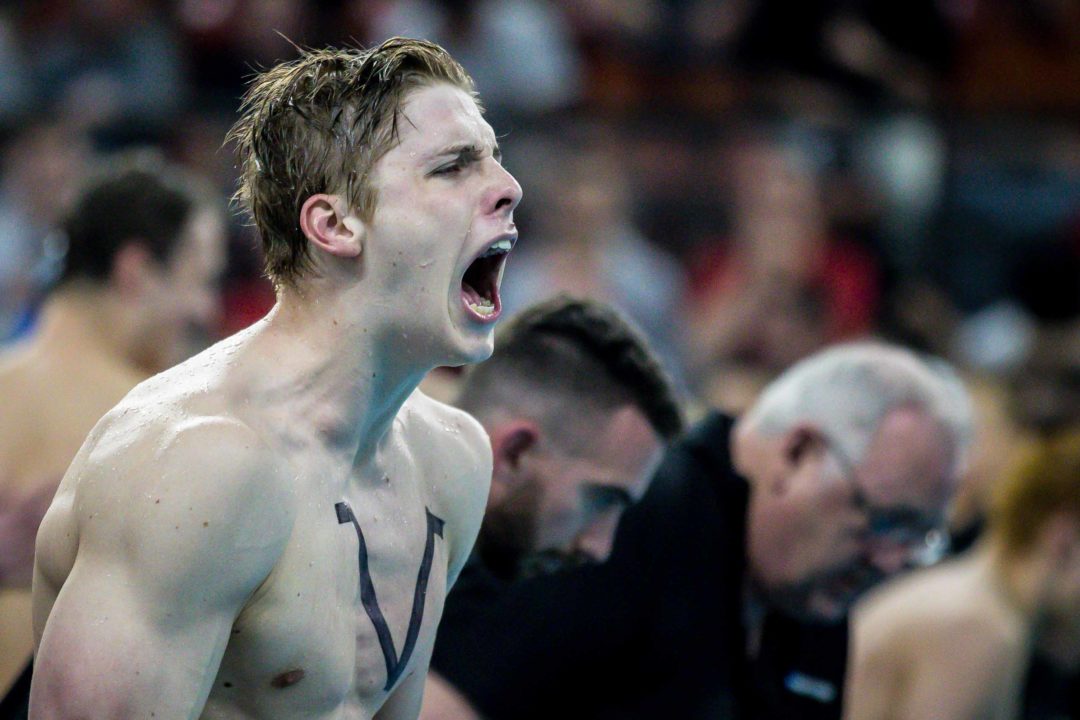 Alabama’s Kensey McMahon got the evening started with a 15:54.06 win in the 1650. That appears to be the 3rd-fastest time of her career, and just over 10 seconds slower than her winning time from the 2020 SEC Championships. UVA’s Paige Madden came in 2nd with a 16:01.83. Today was only her 3rd time swimming the event college, as she only added it to her repertoire last season. In 3rd came UVA’s Maddie Donohoe, and her time of 16:08.05 is the 2nd-fastest time of her career.

Next, Alabama came out on top again as Rhyan White dominated with a 1:49.30 victory. Not only was that a NCAA ‘A’ cut, but that was nearly five seconds faster than the next finisher, teammate Morgan Liberto (1:54.03). Tennessee’s Olivia Harper rounded out the top three with a new personal best of 1:56.13.

Kate Douglass put a quick stop to Alabama’s winning streak. The UVA sophomore hit 47.10, not only lowering her lifetime best of 47.77, but also breaking the UVA school record of 47.46, set by Morgan Hill in 2018. Alabama’s Morgan Scott took 2nd in 48.15, once again setting a lifetime best after going 48.21 in prelims. Tennessee’s Trude Rothrock took 3rd in 48.54, just 0.03s over what it took to get a NCAA invite in this event last season.

Virginia rocked the 200 breast, posting the top 4 times of the day. With only 3 swimmers from each school allowed in the scoring heat in finals, freshman Alex Walsh was relegated to the un-scored “B final,” but she made the most of it, posting a 2:06.72 that garners her a NCAA ‘A’ cut and is her 4th-fastest time ever. In the scoring final, Ella Nelson touched first with a 2:07.19, followed by teammates Anna Keating (2:07.26) and Alexis Wenger (2:07.79), personal bests for both.

Just as on on the women’s side, the Alabama men took two of the top three spots in the 200 back. Sophomore Jake Marcum, who transferred from Indiana for this season, lowered his lifetime best for the second time today to take the win. He came in today with a PR of 1:42.80 from his senior year of high school, went 1:41.10 in prelims, then 1:40.48 here tonight to take the win. That time is over a second faster than what it took to get invited to last season’s NCAA Championships. Alabama freshman Chris O’Connor was due for a big drop in yards, considering he’s been 2:03 in LCM and only 1:49 in SCY, and sure enough, he hit 1:42 twice today, taking 3rd tonight in 1:42.23. UVA’s Justin Grender took 3rd in 1:41.98.

Back in March, Matt Brownstead broke the national high school record on the first day of the PIAA 3A Championships, then put up a 43.29 in the 100 free in the next morning’s prelims before the meet was cancelled before finals could happen. Brownstead’s probably been wondering just how fast he could go in the 8 months since then, and tonight he got his answer, as the UVA freshman broke the school record with a 42.03 to take the win. That breaks a Virginia school record of 42.21 that was set by Scot Robison back in 2010. Alabama’s Liam Bell, primarily known as a breaststroker, took 2nd in 42.81 before jumping right back in to take 5th in the 200 breast (1:55.81). UVA sophomore Jack Wright took 3rd in 43.20, his first new personal best in that event since he went 43.56 as a high school junior.

Tennessee senior Kayky Mota won the 200 IM on Thursday, then the 100 fly yesterday, and now he earned his third individual title in as many days with his 1:42.58 win in the 200 fly. That shaves 0.08s off of his lifetime best, and if we get to see SEC/NCAA Championships in a few months, he could very well challenge the Tennessee record of 1:41.78, which a certain Mel Stewart has held since 1991. UVA sophomore Josh Fong took 2nd in 1:43.76, setting a new lifetime best by nearly a second. It’s worth nothing that Fong’s time is almost identical to his brother Zach’s best time as of this point in his sophomore year, and Zach set the school record at 1:40.18 as a senior two seasons ago. All three top finishers scored new lifetime bests, as Tennessee freshman Jordan Tiffany clipped 0.26s off of his best time to go 1:43.96 here tonight. There was a wide gap between those three and everyone else, as no one else was under 1:46.

The team battle between Virginia and Alabama came down to the final relay. Once again, Brownstead and Matt King battled it out leading off for their teams. This time, King came out on top, 42.19 to 42.21, giving Alabama a narrow lead after the first leg. Alabama’s 2nd swimmer, Jonathan Berneburg, outsplit UVA’s Sam Schilling 42.66 to 42.95. August Lamb narrowed the gap on the 3rd leg with a 42.54 split to Kacper Piotrowski‘s 42.65, and Alabama held a 0.17s lead heading into the final leg. Anchor Jack Wright pulled ahead of Cam Auerbach on the second 25 and never looked back, out splitting Auberach 42.19 to 42.89 and giving UVA the win 2:49.84 to 2:50.42. Both schools finished under the NCAA automatic cut, and UVA set a new school record by 0.99s. Tennessee took 3rd in 2:53.51, with a 42.99 anchor leg by breaststroker Michael Houlie standing out.

UVA Men & Women already bringing the heat… come ACCs/NCAAs the entire team could be unstoppable from the looks of it… not mention only bringing one sound diver of 3.

Agree the UVA MEN and WOMEN are bringing the heat…there MIGHT be an ACC meet. You are having pipe dreams if you believe there will be an NCAA meet. Keep reading that UVA left divers and their 800 Free Relays behind – Why did they not bring the other two “sound” divers?

Wow some great swimming for sure. Congrats to the UVA women and men. The Alabama team has made great strides under Coach Corey. The Vols look strong in several events led by tower diving, mens breastroke and butterfly.

42.02 by Brownstead is arguably more impressive than his 19.2. Impressive

UVa men sweep Bama and Tenn despite not contesting the 800 free relay. And inly bringing one diver…