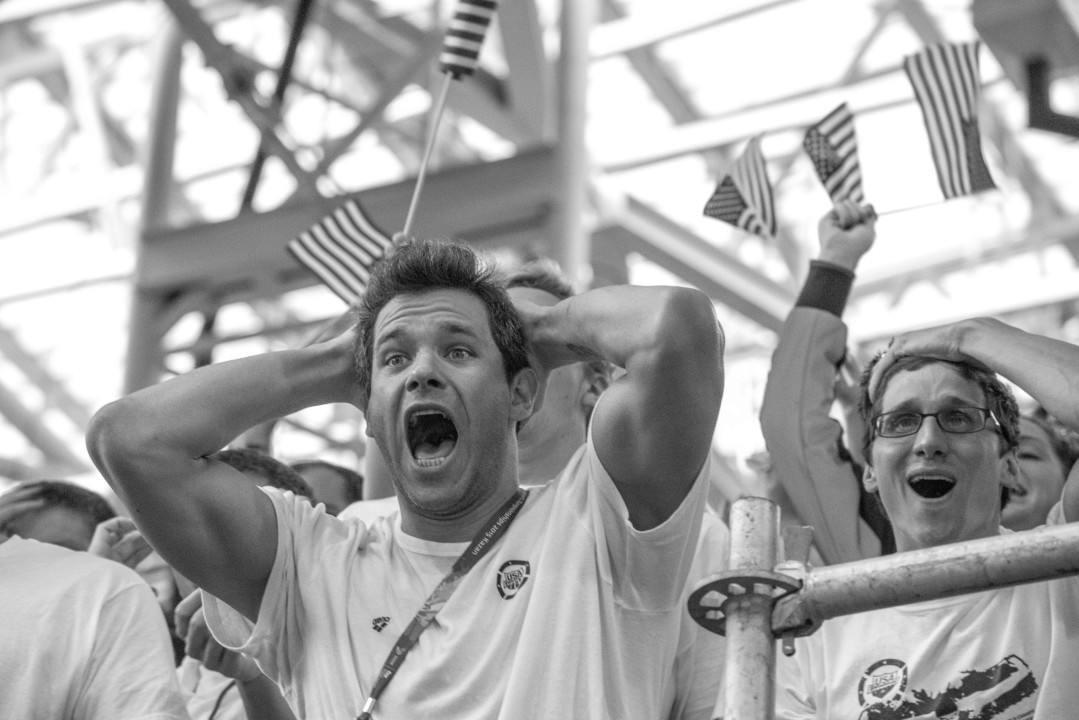 Team USA wound up on top of the total medal standings at the 2015 FINA World Championships. Current photo via Mike Lewis/Ola Vista Photography

The United States has been awarded the overall Team Trophy of the 2015 FINA World Championships, as the country topped the number of gold medals and overall total medals at the conclusion of the meet.  However, with a count of 8 golds, 10 silvers and 5 bronze medals for a total of 23, this is the second worst result for Team USA since 1998.  In Rome 2009, Americans saw just 22 total medals, but the total golds for the Americans sat at 10 at the end of that edition of the meet.

With the help of double backstroke golds by Mitch Larkin and Emily Seebohm, Australia saw its best finish at a World Championships in years.  In fact, its 16 medals (7 golds) totaled more than the entire haul from 2011 Worlds, 2012 Olympics and 2013 combined.

Several other countries also certainly stepped up at these championships, as was the case with Sweden, who had their highest total medal finish in recent history.  After finishing in 13th place overall in 2009, 11th overall in 2011 and 2013, Sweden was boosted into the 7th position with stellar performances by star Sarah Sjostrom and a surprise 50m breaststroke gold today by Jennie Johansson.  The women’s 400 medley relay from Sweden also snagged silver on the day.

Also, with Joseph Schooling’s bronze medal in the men’s 100m butterfly and Alia Atkinson’s silver in the women’s 50m breaststroke, Singapore and Jamaica, respectively, earned their very first medals ever at a World Aquatics Championships.

Is this sayibg anything:

If you like you could think of it as a million points for a gold, a thousand points for a silver and one point for a bronze, I fact it is based only on golds with silvers as the first tie breaker and bronzes as the second.

How does FINA officially award the team trophy? Is it based on the most golds, the most medals, some combination, or a points system (like the individual swimmer of the meet award).

Top American male for me: Kevin Cordes. He really bounced back from his 2013 and 2014 mishaps and swam consistently well. Individual medals in the 50 and 200 breast and he was clutch in the relays. If he were in the 100 breast, he would of probably fought for a top five finish. Hopefully he can build off this and really shine next year. Jaeger and Adrian are also honorable mentions with their American records and second-place finishes. Lochte continues to add to his legacy and longevity.

Top American female: enough has been said about her, I have nothing more to add.

US team? Thanks Katie Ledecky! 🙂
Bad would have been the right word for the first days.
But the last days have been pretty good overall.
So I would say average.
You have perhaps a little bit too many silvers. 10 is a big number. Transform 3 or 4 silvers into gold and you don’t draw the same conclusions.
Considering that a big leader like Missy Franklin was at 80% and that about 30 or 40% of the best US swimmers were not in Kazan, I would say that USA has saved the day.
Next year will be different. But new faces have to take the power now. And former leaders have to wake… Read more »

A very good assessment, thanks Bobo! 🙂

I was right on board w/ this comment until you specified that the US should try to target more “black” athletes.

There’s no need to specify, should be retaining good athletes in general.

What about half black , 1/4 Native American & 1/4 mezo american found at the train station fostered to glory by a White Gay couple ?

There was a black baby dumped in Ny & found by a white gay guy & no one came forward . The judge asked him if he wanted to adopt – he thought about it & said – why not? Modern family !

Haha, we have 4 golds out of 6 medals. Good ratio.
Biggest number of golds won in history!
Only Lacourt and Manaudou medalists in individual
Lacourt involved in 2 golds and 3 medals overall.
Manaudou involved in 3 golds and 3 medals overall.
No medal for the women’s team but worse, only 1 final.
The post Rio looks terrible for the French team with the likely retirements of Agnel, Lacourt, Stravius or Gilot. And maybe Manaudou if he gets tired of winning the 50 free.

biggest number of golds tied with 2013

What impresses me about France is the relay culture. Despite no individual 100 free medalists, you guys took the 400 free relay, due to crazy relay starts and great splits.

Furthermore, Metalla dropped 50.39 in the medley. French men show up for team efforts.

East Germany had more swimming gold medals and total medals in 1986. China took the top spot in 1994 with more gold medals, as did Australia in 2001