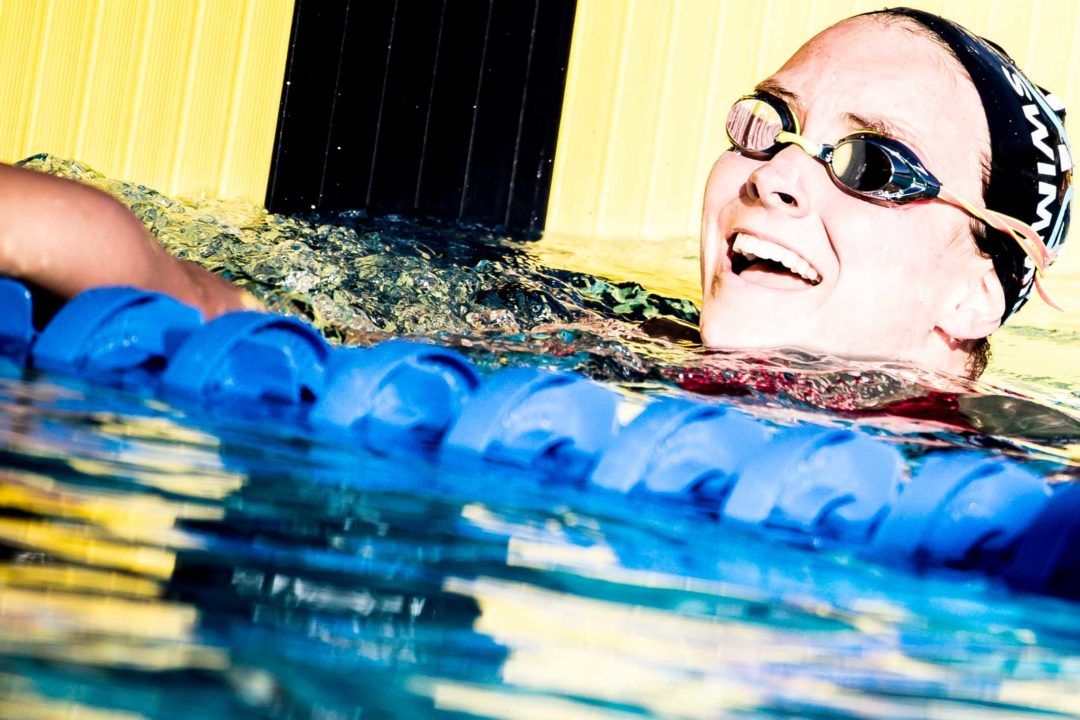 Tadder broke the 100 breast record by 2 seconds while McConagha broke her own 100 back record at the 2021 VHSL Class 5 State meet. Current photo via Jack Spitser/Spitser Photography

Following multiple postponements and the eventual change of venue from the Christianburg Aquatic Center due to weather, Virginia’s Class 5 schools, the second-largest classification, held its state championship meet this week. The event was switched to a timed-finals affair because of the rescheduling, though even with COVID it was originally schemed as prelims-finals.

The team of Alexa Ozment, Sam Bucklew, Spencer Worth, and Maggie Dominick from Frank W. Cox started the meet with a win in the 200 medley relay. Dominick split a 23.96 on the final leg of the relay to chase down runner-ups Albemarle.

Sophia Knapp, a junior at First Colonial who’s committed to UVA, ran away with the 200 free, winning by over three seconds and dipping below 1:50. Knapp, who finished third in the event last year, touched in 1:49.87. She later added a second place finish in the 500 free (4:54.86) behind teammate Samantha Tadder. Tadder, who’s committed to Stanford for the fall, won in 4:45.99. Tadder also added a second event win in the 100 breast, where she broke the state record by nearly two seconds with a time of 1:00.53. This was her first year competing in the event at the state meet. In 2019, Tadder was the Junior National champion in the 400 IM and was ranked as SwimSwam’s #8 recruit in the class of 2021.

Topping the field in the 200 IM was Ablemarle’s Grey Davis. Leading the runner-up by over four seconds, Davis finished in 2:01.16.

The 50 free featured a tie for first place, with Sophia Schorr and Natalie Hidrobo both touching in 24.52. Both improved greatly upon their finishes from last year, as Schorr finished 12th and Hidrobo 8th in 2020.

Princess Anne had a strong showing on the 1-meter diving board, with teammates Faith Pearson and Anabel Foster finishing with the top two scores. Pearson won with a score of 361.20, while Foster was right behind her with 358.50. The pair finished in 2nd and 3rd last year.

Wisconsin commit and Briar Woods senior Mackenzie McConagha continued her dominance in the 100 fly and 100 back, winning both. In the 100 fly she finished in 53.35, claiming her 3rd state title in the event after falling t0 2nd last year behind teammate and current UVA team member Abby Harter. In the 100 back she won her fourth straight title, and broke her own state record, touching in 53.21.

Last year’s third-place finisher Maggie Dominick claimed the title in the 100 free with a time of 52.36.

First Colonial claimed the state title in the 200 free relay, with individual event winners Knapp and Tadder being joined by Faith Sconing and Elizabeth Berenguer to finish in 1:36.40. Knapp, Tadder, and Sconing would be joined by Madison Hartley on the 400 free relay to again win, this time by almost four seconds. Tadder, who anchored the 400 free relay, split a 49.80, tying her with Mackenzie McConagha for the fastest split in the event.

The team of Jack Spinnanger, Ben Eichberg, Devin Bateman,  and Luke Osleger claimed the state title in the 200 medley in a time of 1:3376 for Stafford to start the meet. The team was less than a second off of the state record set in 2015 that included Andrew Seliskar. The quartet would later again team-up, this time to win the 200 free relay in 1:25.83.

Robert Quan of third-place Riverside ran way with the 200 free, winning the event by over a second. Quan touched in 1:40.90 and was the only swimmer to dip below 1:42.0. Last year he finished 5th in the event.

Thomas Jefferson claimed their first event in the 200 IM, with Michael Zhang finishing first in 1:51.32. Zhang was nearly 7-seconds faster this year than he was last year when he finished 8th. Later in the meet, he would win the 100 breast in the closest event of the day. Zhang would win the event by just .01, beating teammate Evan Zhang with a time of 57.03. The third place finisher, Ben Eichberg, was right behind the pair as well, finishing in 57.09 to take third.

While Evan Zhang was narrowly touched out in the 100 breast, he did claim a state title on the day in the 50 free. Zhang, who finished 3rd last year, touched in 21.12.

Ari Snow, a senior at John Lewis, claimed the state title on the 1-meter diving board. After winning the event in 2019, he fell to third last year. In his final year, he again won, finishing with a score of 405.5.

Towson commit Blakely Dean won his first state title in the 100 fly. The senior at the Matoaca touched in a time of 50.57.

The only swimmer to dip below 47.0, AJ Schwabe claimed the state title in the 100 free. A junior at Midlothian, Schwabe touched in 46.97.

After finishing in 8th in the event last year, senior Chris Kopac jumped to first in the 500 free, winning by over eight seconds. The senior, and Bucknell University commit, finished in 4:33.44.

Junior Will Kohn finished with the top time in the 100 back for Thomas Jefferson, winning in 50.64. Second place in the event went to Teddy Cross, who was over three seconds faster than his time from last year that placed him in eight.

Congratulations to all the competitors! Great night of racing.