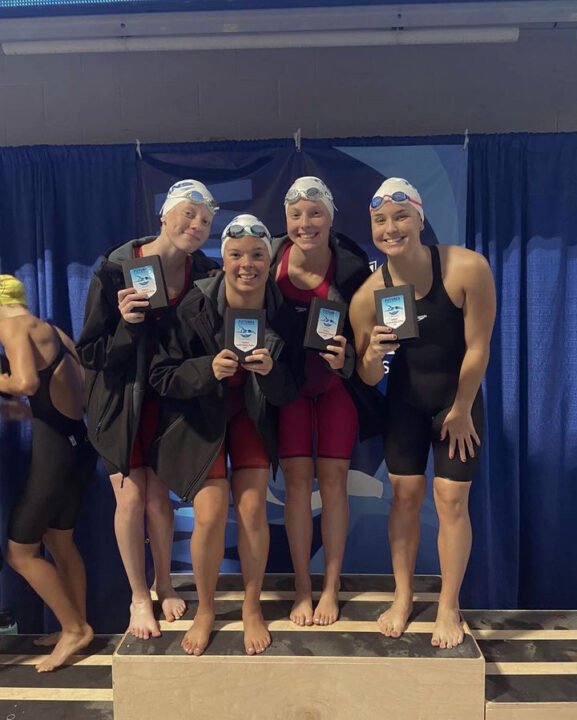 A group of swimmers from the TAC Titans broke a National Age Group Record at last weekend’s Futures Championships in Cary, North Carolina, even racing without the team’s superstar in the age group.

Showing off the depth of the club, a group of 17-18 girls swam a 4:08.71 in the 400 medley relay. That broke the 2014 record of 4:11.47 by more than two-and-a-half seconds. The old record was set by the King Aquatic Club in Seattle, and was part of a fairly-old set of relay records in this age group when compared to most.

The TAC team of Taylor Morris, Samantha Armand, Charlotte Hook, and Keelan Cotter combined for the new record-setting effort in their home pool. The team didn’t have Tokyo 2020 Olympian Claire Curzan, who was across the country in Irvine, but the team still has plenty of other stars – including National Team member Charlotte Hook.

Also under the old record was a 17-18 relay from Club Wolverine. Lily Cleason, Edwina Jalet, Brady Kendall, and Hannah Bellard combined for a 4:11.33, which is a Michigan LSC Record and faster than King’s old national record.

Hook’s butterfly leg was a huge difference maker for TAC as they annihilated the old record. She alone was almost five seconds faster than VanderWel was on the old KING record-setting relay.

Hook will join Curzan at Stanford next fall, while the other three members of the team all return to TAC for another season. Morris will swim for Michigan in 2023, Armand will swim for UNC, and Cotter will swim for NC State.

This headline is poor! Celebrate the swimmers that set the new record.. they are talented and rockstars themselves!!

If you want an advertisement, talk to Mel.

32
-1
Reply
Why Are Swim Parents So Whiny?
Reply to  Braden Keith

Basketball: “Hell yeah we won without our best player, we’re a team and he was there to pick us up. We’ll be ready for him when he gets back.”
Baseball: “It was tough pulling out that series without our star pitcher, I think it’s just a testament to how good our team is. We appreciate him being their pulling for us.”
Hockey: “It was tough having our starting forward go out in the first period, but I’m proud of how we rallied together.”
Swimming: “WAHHHHHHH How dare you not makebelieve that our best swimmer doesn’t exist!!! Mentioning her makes us feel sad, even though she has brought gobs of attention to our program and athletes over the years!! WAHHHHHH!!”

Your right, you do what you need to get someone to click. As a reader it just seems like the in the past these type of headlines were more like X TEAM BREAKS 15-18 NAG MEDLEY RELAY

Is Charlotte Hook not a big enough star?

Also, the second place team, CW, was under the old record with all 17-18s.

Good catch! Adding their info above.

CW just happy to be included in the article. Thanks for the shoutout. Well done TAC!