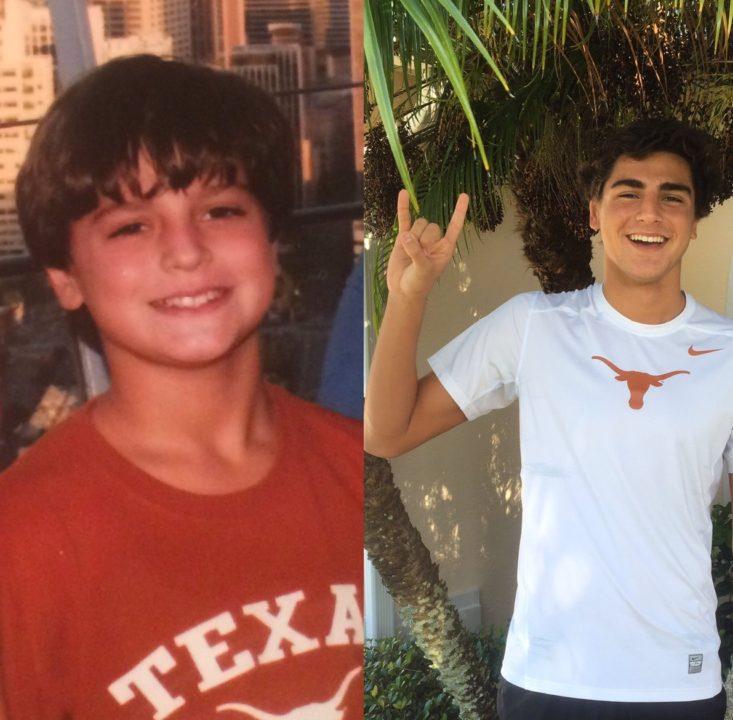 In the spirit of Halloween, Austin Katz, SwimSwam’s No. 6 high school recruit in the Class of 2017, tricks Florida and treats the men’s defending National Champion Texas Longhorns with his verbal commitment. That leaves Sean Grieshop as the lone uncommitted in the high school boys’ top 10.

Beyond excited to announce my verbal commitment to the University of Texas. HOOK EM???????? pic.twitter.com/DjtcxyNuuf

It’s a bit of a trick for the Florida Gators because not only is Katz a Florida native, but also his older sister, Taylor, is currently a senior on the Gator women’s team, while his older brother, Alex, was supposed to transfer into the men’s program this season from Michigan. (Alex Katz, however, is not listed on this season’s roster for Florida.) The Gators did, however, pick up Michael Taylor from the State of Georgia, so the loss of Katz has already been mitigated.

The Olympic Trials Finalist will feel right at home at Texas, where middle-distance freestylers (Olympic Champion Townley Haas), sprint freestylers (Brett Ringgold and Joseph Schooling) and backstroke specialists (John Shebat and Ryan Harty) are plenty. However, the Longhorns will be in a bit of a rebuilding phase when Katz arrives on campus, after losing Jack Conger, Clark Smith, Will Glass and Will Licon to graduation.

With his commitment, Katz joins No. 10 recruit Chris Yeager, Colter Carman, No. 12 recruit Sam Pomajevich, and Luke Bowman in Texas’s Class of 2021.

I have zero information where Sean Grieshop will commit, but do not like the fact that Bob Bowman was at the National Team practice the other day, because I hope Sean stays in Austin. Austin Katz is a great addition though. Eddie can teach him thing or two about backstroke. Hook’em.

So excited for Austin! He’s from my town, and I can’t wait to see Coach Reese help him reach his full potential. Plus, what a cool city to live in as a college kid.

Katz-Taylor reminds me of Conger-Murphy a couple years ago. Interested to see where the future will take these two young men.

Welcome to the 40 acres! Hope you like “bling” because you will have a chance to add a few championship rings to your jewelry box. Hook’em

Not with cal around

Eddie Reese will be spoon feeding you a big slice of humble pie for a couple of more years – try not to choke on it. Hook’em