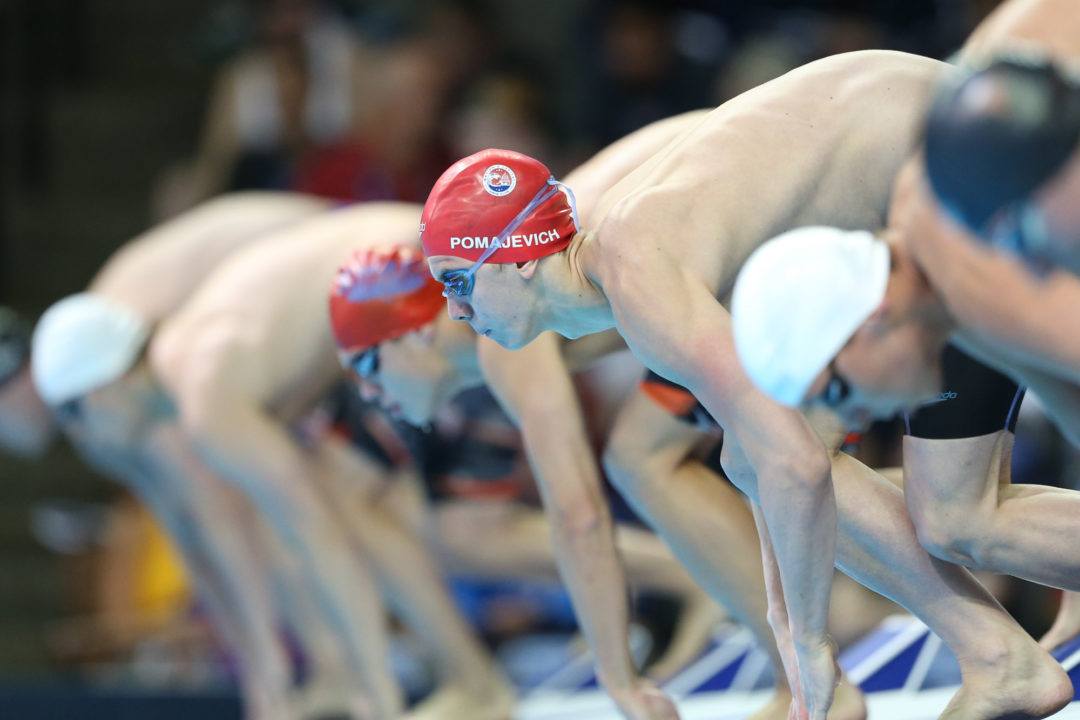 Sam Pomajevich is an Olympic Trials qualifier and a member of the USA Swimming National Junior Team. Archive photo via Tim Binning/TheSwimPictures.com

U.S. National Junior Team member Sam Pomajevich has verbally committed to the Texas Longhorns, dipping back into the D.C. recruiting pool to find a possible Jack Conger replacement for the 2017-2018 season. He’s SwimSwam’s 12th-ranked recruit in the high school class of 2017.

Pomajevich, from the Nation’s Capital Swim Club (NCAP) is a versatile freestyler, butterflier, and IM’er at his best.

So excited to announce my verbal commitment to THE UNIVERSITY OF TEXAS! Hook'em! ???????? pic.twitter.com/IEQvHOeJvw

While Pomajevich is certainly not yet at the level of the American Record holder  in the 200 fly, his ability to fill in spots potentially in all 5 relays, his butterfly abilities, and being from the D.C. area does remind vaguely of Conger.

Pomajevich trains at the Burke, Virginia site of the multi-state NCAP club under coach Pete Morgan. That’s the same site that produced current Michigan freshman, and sub-20-second high school sprinter, James Jones. Pomajevich is the two-time defending Virginia 6A State Champion in the 100 fly and also has an NCSA Junior National title in the long course 200 fly.

just how long will Eddie coach? he still has the touch, but……

I’m sure once Eddie retires, Texas will have another incredible coach lined up. They’re THE swimming powerhouse and any coach in the country would want to take that job

I totally agree. But no guarantees (the last few female swim coaches couldn’t crack top 5 and Kirby Smart is struggling)!

Coach Marsh at Texas would be a great replacement for Eddie OR Coach Holloway?

Texas has an awesome coach in Carol Capitani so no need there!!!

Eddie has said that he’s good to go at least through the next Olympics, God willing. He plans to coach until they have to carry him off of the pool deck as he simply loves it. Getting up at 4:00 a.m. and running on the tread mill and rowing for a couple hours a day as he does before holding practice certainly should keep him there as long as possible.

the future of US men’s 200 butterfly