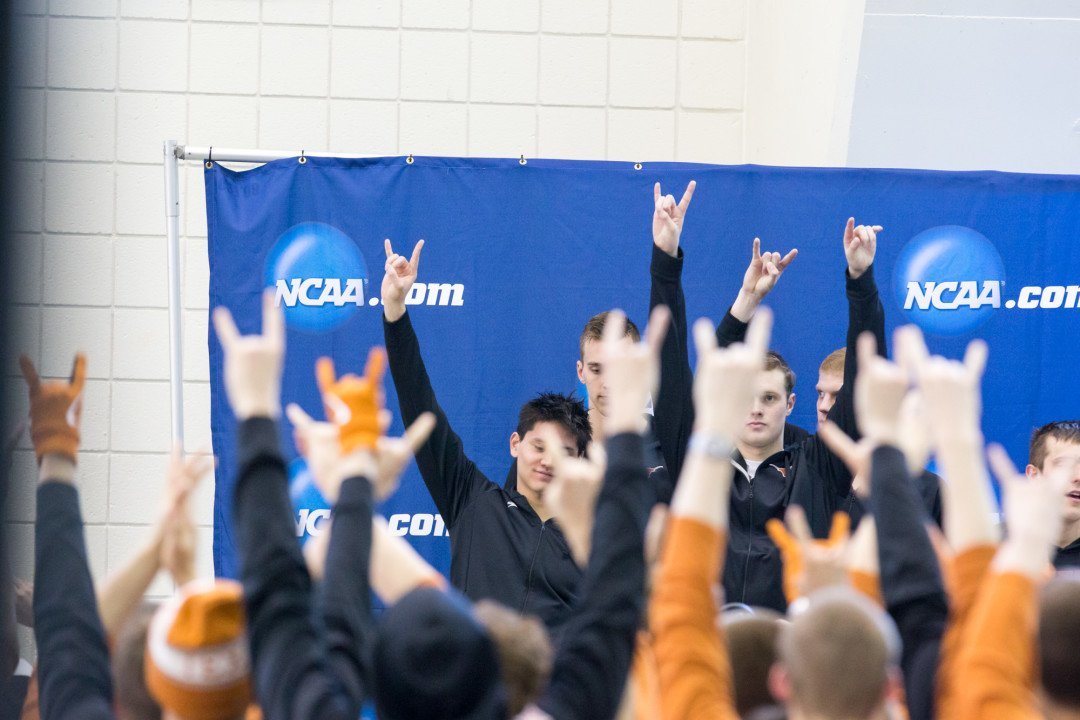 Distance freestyler Colter Carman has made his verbal commitment to stay in state and join the defending NCAA champion Texas Longhorns next fall. Archive photo via Tim Binning/TheSwimPictures.com

Distance freestyler Colter Carman has made his verbal commitment to stay in state and join the defending NCAA champion Texas Longhorns next fall. Carman is a senior at Carroll Senior High School in Texas, and swims club with the North Texas Nadadores. He’s primarily a distance freestyler, but also has potential in the IM races.

Carman has best times in the 500 free and 1650 free that are already good enough to have made the championship final at last season’s Big 12 Championships. In the 1650, he would’ve been 2nd only to the Longhorns’ own Clark Smith, who will be graduating after this season.

When he arrives at Texas, Carman will train alongside Townley Haas, a 2016 U.S. Olympian and NCAA Champion in the 200 and 500 freestyles. As a freshman, Haas smashed the American Record in the 200 yard freestyle, lowering the mark to a 1:30.46. He then went on to swim the 200 free and 800 free relay at the Rio Olympics, winning 800 free relay gold alongside Longhorn teammates Smith and Jack Conger.

In addition to Haas, Carman will also have a handful of training partners who were A-finalists in the 500 free at last season’s Big 12 meet. That group includes Max Holter, Jeff Newkirk, and NCAA qualifier Jonathan Roberts.

Texas will be over delighted to have this DOMINATE athlete in their program. This young lad is going to be a factor in the teams speed factor as well as the positive moral. As Davy Crockett once said, “You may all go to Hell, and I will go to TEXAS”. I have seen this young cub swim and he blows out the competition like a man would see in WWII.

huh?? comparing swimming to WWII. That is over the top. That said, he should improve dramatically in that training environment and hopefully be an eventual factor at NCAA’s rather than just Big 12’s.