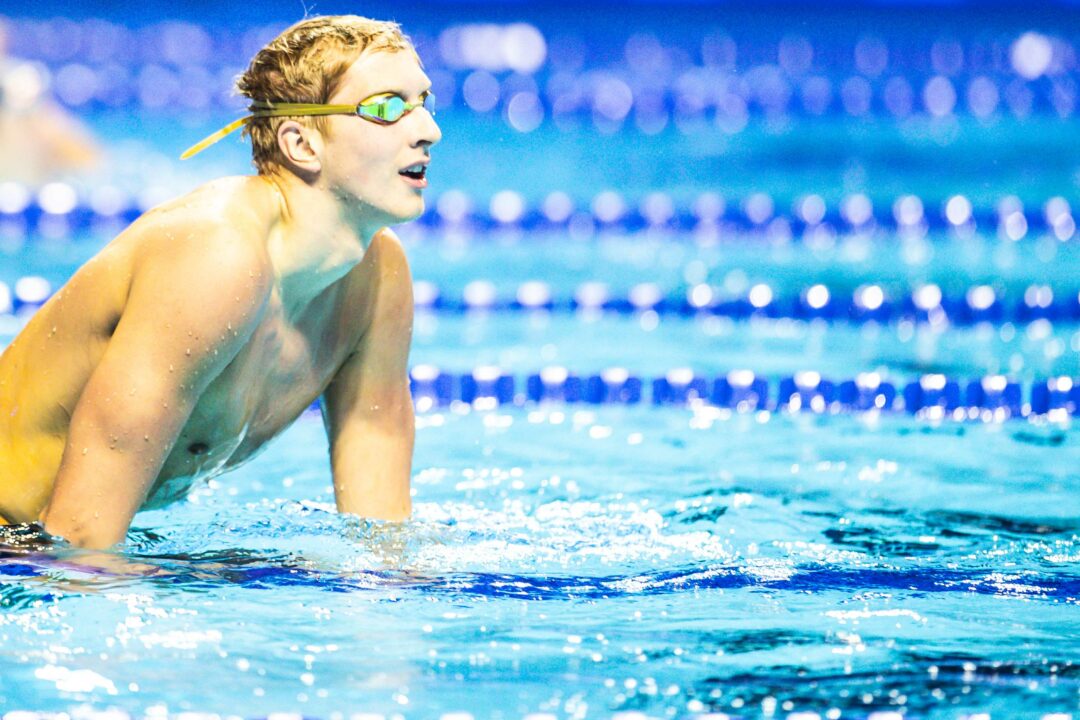 Despite the recent eye-popping performances from UGA commit Matt Sates, fans still think Kieran Smith is the man to beat in the 200 free at NCAAs. Archive photo via Jack Spitser/Spitser Photography

Our most recent poll asked SwimSwam readers which swimmer they currently favor in the men’s 200 free NCAA final, should the matchup come to fruition:

Question: Who would you favor in an NCAA 200 free final?

The poll was inspired by the scorching 1:40.65 SCM 200 free performance from 18-year-old Matt Sates at the FINA World Cup in Berlin. Sates, a South African native, is committed to swim at the University of Georgia, and is expected to join the team later this season and be eligible to compete at SECs and NCAAs.

Given that Sates’ swim made him the sixth-fastest swimmer in history, and was only 1.28 seconds slower than what a suited Paul Biedermann did in 2009—the same guy that set the ridiculous 1:42.00 LCM world record just three months earlier— we wanted to gauge how fans rated Sates in a hypothetical NCAA showdown with Florida’s Kieran Smith and Texas’ Drew Kibler, who finished 1-2 in the national final last season.

The results show that SwimSwam readers still overwhelmingly favor Smith over both Sates and Kibler, with the defending NCAA champion receiving over 71 percent of votes.

Smith owns four of the seven-fastest swims ever in the SCY version of the event, including two of history’s five sub-1:30 performances, and is coming off a phenomenal summer where he broke 1:45 in the LCM 200 free and won an individual Olympic medal in the 400 free.

While time conversions will vary on accuracy depending on numerous factors, Sates’ 1:40.6 swim converts to 1:30.6 in yards, which falls right in the thick of where Kibler typically was last season.

Smith remains the clear favorite, given his multiple sub-1:30 performances and the progress he made over the summer, but Sates will certainly be a factor once he gets his feet wet in the NCAA, and it’s easy to see him joining the elusive sub-1:30 club.

One swimmer that was admittedly overlooked in the poll is American and NCAA Record holder Dean Farris, who clocked 1:29.15 on the lead-off leg of Harvard’s 800 free relay at the 2019 NCAAs.

The entire Ivy League didn’t compete last season, so Farris wasn’t racing in the NCAA in 2020-21, but he’s back this year for the Crimson. However, it remains to be seen if he’ll race the 200 free at NCAAs.

Even in 2019, when he set the all-time record in the event, he opted to race the 100 back individually instead (which he won in what was the third, now the fourth-fastest swim ever).

Farris also dropped the 200 free at the 2021 U.S. Olympic Trials in favor of the 100 back, so, at least as of now, it seems he’s leaning towards racing the latter again at NCAAs.

Below, vote in our new A3 Performance Poll, which asks: If USA Swimming’s Duel In The Pool were to come back, would you want to see Team USA take on Europe, Australia, or the world?

This race could potentially end up being 4+ guys with sub 1:30 potential. Obviously that would be tough for all of them to hit in the same race, but the potential is there. I’d also include Trenton Julian in there with at least 1:30 potential, that dude is something else.

I agree that Julian has 1:30 potential, but I have a feeling we’ll see him opt for the 100 fly this year

They won’t all swim it, but Sates, Smith, Farris, Kibler, Julian, Curry, Foster, Magahey, House, Callan, Urlando, and Albiero all reasonably have the potential to go sub 1:32.00 flat start. This event has gotten so fast. We’re gonna see a sub 6 minute 800 free relay within the next 10 years.

Three Dawgs on that list…. that 800 free relay is gonna be tough to deal with!

USA vs Australia would be the closest matchup of the three choices, but I think USA wins it fairly easily anyway, especially because it’s almost certainly held in the USA and a chunk of Australia’s stars probably wouldn’t care enough to go.

stop sleeping on my boy DEANNN

This is all Kibler