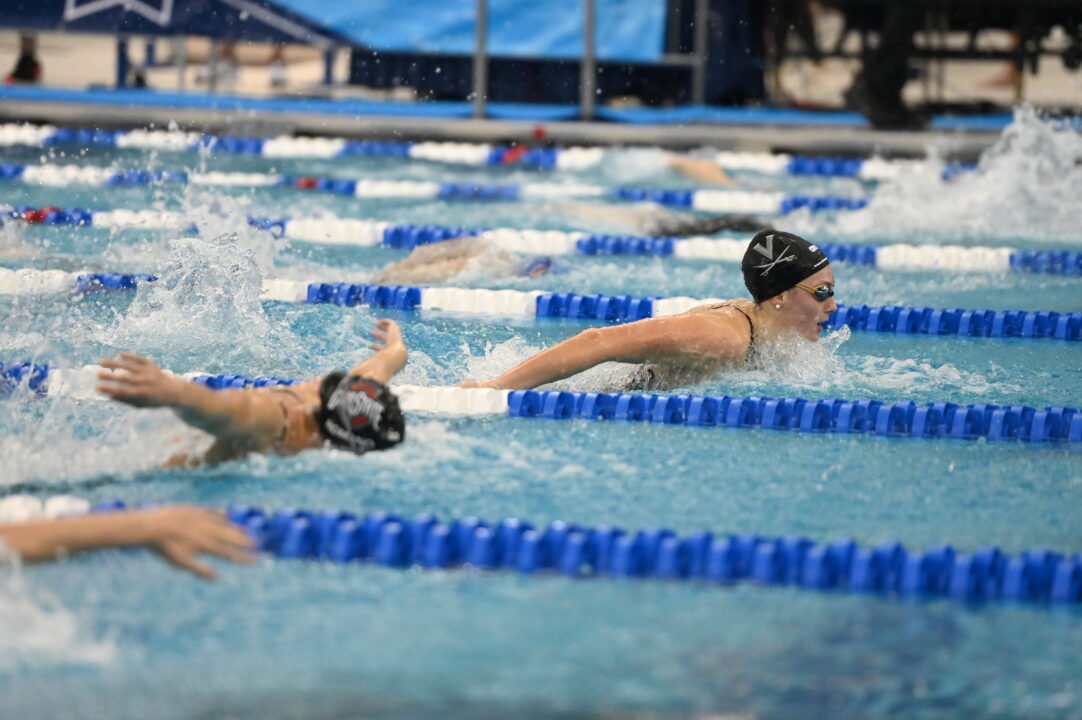 More than one third of readers want to see the 100 IM added to the NCAA Championship lineup. Archive photo via NCAA

Our most recent poll asked SwimSwam readers which races they want to see added to the NCAA Championship schedule:

Question: Which event(s) would you like to see added to the D1 NCAA Championships?

This poll received a good number of votes for all four options, with the 100 IM leading the way at 36.4 percent.

The race has always been one that fans have wanted to see top swimmers race—primarily because it’s historically been so rare. For American swimmers, the only time they would ever really race the 100 IM was every two years at the Short Course World Championships, where Ryan Lochte reigned supreme by winning three consecutive titles and lowering the world record three times.

It was only recently that we got to see names like Caeleb Dressel and Beata Nelson race the event with the introduction of the International Swimming League, but it sure would’ve been something to see those two, Lochte, and so many other sprint stars race the yards event in collegiate competition.

25 percent said they wanted the stroke 50s added to the NCAA lineup, which would offer the backstroke, breaststroke and butterfly specialists a definitive third event to race (instead of having to dabble in the 200 IM), but adding three new events could be difficult scheduling-wise.

Just over 20 percent think the schedule is fine as is, while 18 percent want to see the 1000 free added, like it is at the Division II level.

Below, vote in our new A3 Performance Poll, which asks: How many U.S. Open Records will be set at the men’s and women’s NCAA Championships (combined)?

Add the 1IM and the 1000. Make them timed finals, place them on Wednesday. Go 1000, 1IM, [relay break] 800FR relay. Makes the first day more viable and more likely to get TV time if we’re watching arguably the most fun/exciting/entertaining short course race there is.

The 1IM is a crucial event for 12U swimmers to learn but IMO 13O is the time to put your big boy and big girl suits on and take on the 2IM and 4IM. Or spend the rest of your swim career doing NTS meets. In age group IMX scoring, the 1IM isn’t even measured. Next we’ll be voting on 25 yard races for NCAA swimmers so they can be competitive with 6U and 8U times.

I disagree. There are so many versatile sprinters who are already limited because of the lack of stroke 50’s (think Micheal Andrew)- atleast give them one event to use their unique skill set in.

I think the final number for US Open records broken will be well over 5. My ranking for potential US Open records at NCs, listed in order of my confidence level that they will get broken:
100 BK, 200 BR, 100 FL, 50 FR, 200 BK. Feel like there is a decent shot in all of those. Think Alex Walsh has an outside shot in the 200 IM as well.

I’d be more open to adding a 1000 if the meet were longer. With just 3 days of individual events 2 500s, a 1000, then a 1650 is not setting your athletes up for success. Don’t think it was an accident that a Penn miler went way faster at a meet a week after Ivies to get her qualifying time for NCs. And with how swimming is viewed by the NCAA, we don’t need to make the sport more expensive by stretching out the meet. 100 IM fits nicely into the last day schedule.

I like to see the 50 strokes and the 100 IM, because they are quick, fun and do not add a lot of time, but if you look for and point of equality it would be the 1000 Free. Distance swimmers have the 500 free, the mile and then they have to look and see if there is anything else they can do fairly well (400 IM or 200 Free or double up the last day and go for the 200 of one of the other strokes).

THIS!! sprinters have a viable third event in either the 2IM, 50/100 free, or another stroke 100, but distance swimmers are pigeonholed into the 500 and 1650. not to mention the upper mid 200/500 swimmers who can take a stab at the 1000 before hitting the ultra distance training schedule