Swimming’s TopTenTweets of the Week: #8 Canoeing Your Way Thru Warmup 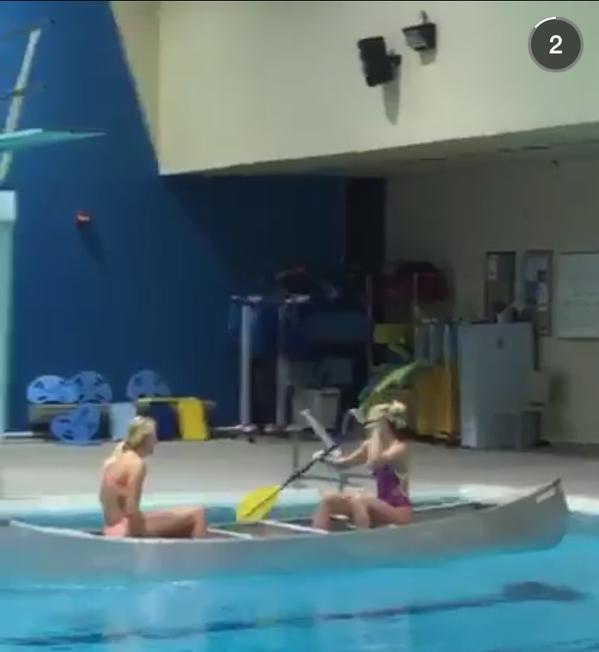 Think I just found how I'll pay for the rest of college…USA swimming trading cards circa summer 2004 @swimswamnews pic.twitter.com/K24ltz1xZC

Throwback. I’ll trade you my Coughlin for your Soni!

Stanford freestyler and 2012 Olympian Lia Neal supporting Serena Williams at the 2015 US Open.

2012 Olympian Jimmy Feigen started his training with Swim Mac, but he’s got a long way to go to get up to their standards… You have to start somewhere, right?

"Coach, can we do a backstroke set so we can look at the sunset?" pic.twitter.com/Xf1Z4FiQOP

This would definitely entice me to go to practice more often…

Good workout today with @simone_manuel keeping each other motivated, even though the baby's due date is tomorrow! pic.twitter.com/TT4osRoX6L

Simone Manuel and her trainer working out. Also, her trainer was about to have a child when this video was taken?! OK! Alright.

Happy birthday to the one and only Doc Salo! You look a day older than 56 and 364 days! Keep it moving! Fight On ??? pic.twitter.com/bygUJ4uX1S

You know you're tall when you stand out in a crowd of 5,000 people @_reecewhitley @swimswamnews pic.twitter.com/PLNQmWKSfi

.@LSUfball We can play in this type of weather. Need a running back? pic.twitter.com/RFrF6rkFjD

College football is back in season. LSU put on a little twist to game day festivities.