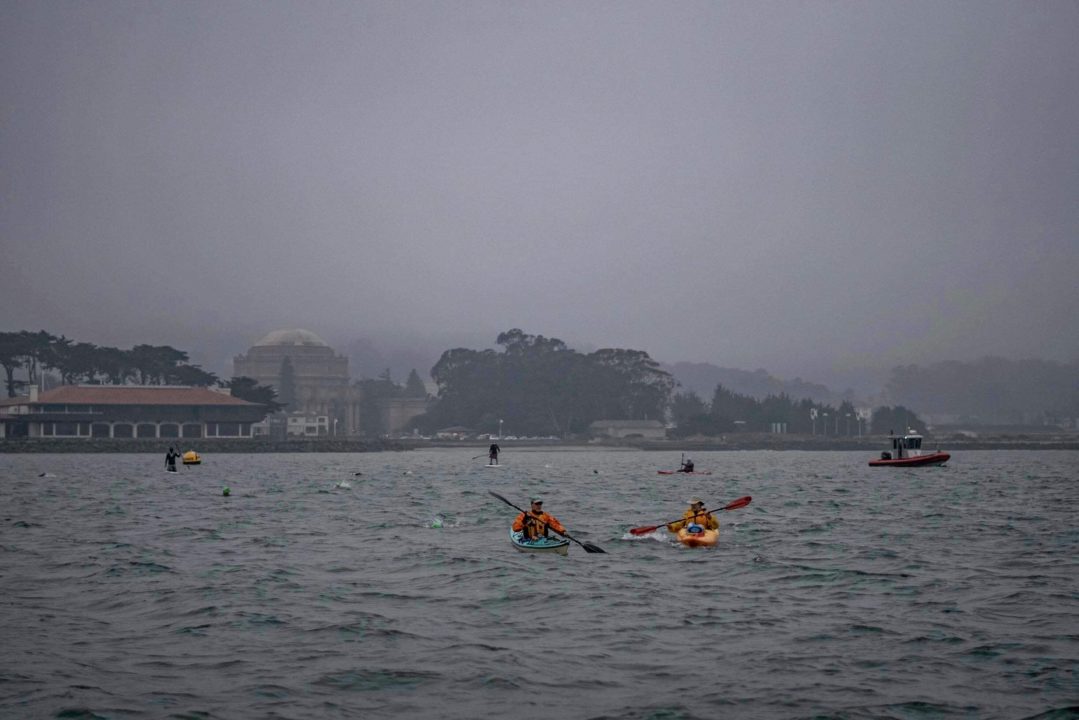 You could not see a thing. A small whiff of smoke was inhaled with every breath. Alcatraz only existed as a little black smudge on the horizon line, yet I was supposed to swim around the island in an hour. The fog was thick and the wildfires ablaze just a few miles south of San Francisco. Nothing could have prepared me for this. Open water swimmers train to be ready for any possible scenario, but how can you train for swimming through smoke around an infamous prison during a global pandemic?  Were today’s conditions similar to when those prisoners were speculated to have escaped from Alcatraz more than 50 years ago?  This was a scenario only seen in movies.

I have been dreaming of tackling this swim for ten years. I view it as a necessary stepping stone in preparation for longer and more challenging ocean marathon swims. However, the uncertainty surrounding athletic events in 2020 made traveling 2000 miles away risky and challenging, especially with juggling college and a new job. On top of that, I have not had access to a pool in half a year, training only in open water. Despite not being at my best, I knew I was ready. Where there’s a will, there’s a way.

The Aquatic Cove at Fisherman’s Wharf is legendary, making San Francisco a bucket-list-destination for any open water swimmer. Seeing Alcatraz, the Golden Gate Bridge, and Angel Island, all while swimming along the beach in the middle of a big city usually makes for a unique form of sight-seeing.

The smoke clouding our views of the city created a spooky ambiance for an even more daunting experience. The day that I arrived in San Francisco, the visibility was less than 50 feet. A layer of ash covered everything. People and animals were being displaced by wildfires. A raccoon was hanging out on the beach of Aquatic Cove in the middle of the day. San Francisco felt like a ghost town.

This was my first time swimming in the Pacific Ocean, so getting a practice session in really helped ease any nerves. We went over the route and what currents to expect. As we got our feet wet, the 61-degree water temperature felt unreasonably warm. Cold salt water has less of a bite compared to fresh water. What a pleasant surprise!  Unfortunately, the abrasiveness of salt water slipped my mind, and my neck was rubbed raw by my wetsuit by the end of the trip, even with body glide.

Aquatic Cove was beginning to feel like home. Fears of what lurked in the deep diminished, and the excitement of the moment took over.  I was astonished to see seals during the practice session, and then hanging out in the cove the entire trip. This swim should be known as “Seal Fest.” Then a fisherman caught two stingrays right next to where we were swimming!

Sighting would be the biggest challenge. The buildings along the coastline are hard to see through the waves even on a clear day. Getting lost in the fog was a possibility, so I set a compass to my watch face. I wore the wetsuit, so I would stay warm if I did get lost.  Safety concerns outweighed a focus on speed, obligating us to swim with a buddy, near the support boats in the smoke and fog-filled haze.

The day before the swim we were notified that the dangerous air quality would be sufficient reason to cancel. When the race organizers said we could back out, 80% of the swimmers did just that. Only eleven swimmers were unrelenting in pursuit of their common goal. There was simply no way that I could back out when I was this close.

The big day arrived, full of excitement and uncertainty. You could barely see Alcatraz. Angel Island and the Golden Gate Bridge were nowhere in sight. We were told to don our wetsuits and get in the water, still awaiting Coast Guard approval. The photographer for the event overheard Coast Guard relentlessly withholding authorization for us to start. When permission was finally granted, we took the chance, even with the faint outline of a ship appearing in the distance.

About thirteen minutes into the swim, kayakers started shouting. We needed to get out of the way for the ship to pass through. We were all corralled onto a boat; cargo ships do not stop for swimmers!  At this time, I really appreciated the long sleeves of my wetsuit barricading the wind onboard the boat. I am still wondering how the two individuals who swam skins didn’t freeze.

We returned to the water and continued our quest. I found myself sticking around one particular kayaker who guided me to the famous green buoy, around the island, and back to San Francisco. Swimming on the east side of the island was relatively easy with the island blocking most of the current, providing the first opportunity so far to really see Alcatraz. Don’t forget to enjoy the view when you can along the way!

Once past the island, the current immediately started pulling in one direction away from the finish line. By the time I reached shore, I was much farther east than expected, and had to swim against the current to finish. Sighting only steers you in the right direction when you can actually see the skyline. I started sprinting as soon as I could make out the entrance to Swimmer’s Cove.

Cheers could be heard at the finish line. As the waves helped carry me into shore, another type of wave overcame me. The magnitude of how much love and support I received over the past few weeks was overwhelming, engulfing me in the moment. We did it! We swam around Alcatraz during a global pandemic, through the smoke and fog!

I am slowly taking baby steps, warming up to cold water, which included a mini training session with fellow MySwimPro Ambassador, Catherine Breed, world record holder for swimming the length of Lake Tahoe. We did an easy swim in the Aquatic Cove the day after the event, no wetsuits. I couldn’t have worn a wetsuit even if I had wanted to since my neck was rubbed raw from the day before. Apparently one layer of body glide is not enough in salt water!  Nonetheless, Catherine shared some wise words of advice, advising to just go for it and pursue your dreams. Now, I am approaching cold water with a completely different attitude.

Just thinking about swimming around Alcatraz still sends chills down my spine. It is slightly terrifying, but that is also the allure. Choosing to face one’s fears is the avenue that will lead to the greatest possible growth. Hesitating to follow your dreams leads to regret. However, I am finally learning that what is in my own head is the biggest obstacle. Conquering your fears gives the power back and opens up the mind to think bigger, inevitably presenting opportunities along the way if you continue to apply yourself.

Visibility improved the day of our departure. For the first time, you could see the Golden Gate Bridge and Angel Island from the cove. Today was the first day of the next phase change for reopening with the coronavirus and things just felt a little more serene and carefree. We had picked one of the strangest times in history to visit San Francisco, but we made the best of the trip, devouring delicious food and touring the city by scooter. We visited China Town and hung out on the beach on the Pacific Ocean finding sand dollars.

We pushed through the doubt and difficulties encountered along the way and made dreams come true. In the end, we only regret the chances we do not take. If you have passion and commit to your visions, anything is possible.  I am happy to announce that my dreams are leading me to my next chapter in life, the opportunity to be my local YMCA’s Aquatics Coordinator. Believe in your dream and make it happen!

Michelle Rogalski currently resides in West Michigan, and has been a fish ever since she could remember, swimming year-round most of her childhood.

“Open water marathon swimming is my main passion, with my sights set on swimming long distances all over the world. The water is my happy place. To help ensure that we can all enjoy it in the future, I like to create marathon swim fundraisers advocating public access to clean water. My other time is spent as the Aquatics Coordinator for the local YMCA, as a college student, and as a MySwimPro Ambassador. I also have a small business making wire wrapped jewelry on the side. I love to sing, see live music, kayak, and bike ride.”

Amazing accomplishment, congratulations Michelle on completing the swim and following your dreams even in such conditions! Great article.