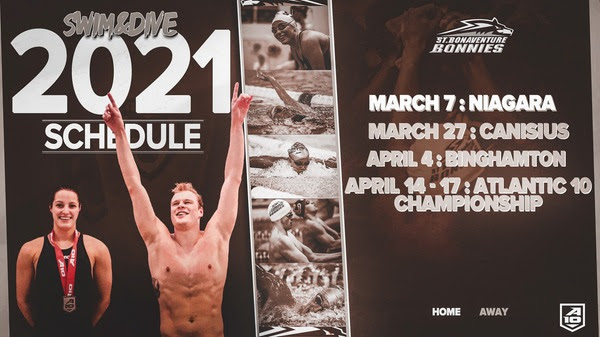 The Bonnies will begin the season March 7 at the Reilly Center Pool when they host Niagara, and wrap things up at the A10 Champs, April 14-17 in Geneva, Ohio. Current photo via St. Bonavetnure Athletics

The Bonnies will begin the 2021 season March 7 at the Reilly Center Pool when they host Niagara.

The women’s and men’s swim teams are coached by Skip Nitardy who is in his third season at the helm of the program, and he is assisted by Laura Harting. Stephanie Fleming coaches the men and women’s dive team.

The Brown and White are then off until they travel to Buffalo to take on Canisius March 27.

The Bonnies finish up the regular season with an away meet against Binghamton April 3.

The men’s team brings back 15 swimmers and divers, Matthew Bielobradek, Michael Bruno and Austin Campbell. The Brown and White welcome 11 newcomers to this year’s roster, including nine swimmers and two divers.

On the women’s side, the Bonnies welcome back 13 swimmers from last year’s team while Mary Wilson is the lone returner for the women’s diving team. Six newcomers join the roster for the 2021 season. Four swimmers and two divers make up the Bonnies’ freshmen class.

The 2021 Atlantic 10 Tournament is scheduled for April 14-17 at the SPIRE Institute in Geneva, Ohio.