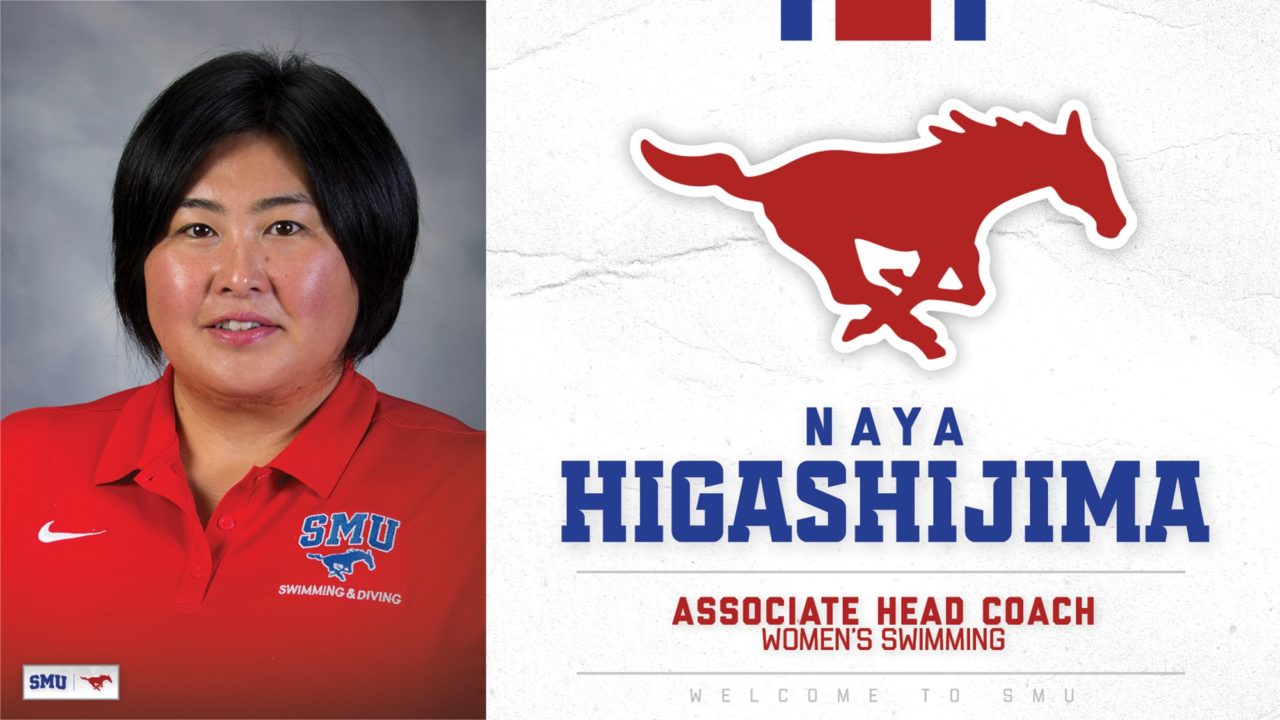 The SMU Mustangs have named Naya Higashijima as the new associate head coach of the women’s swimming program. Social media posts indicate that Higashijima has been on deck in Dallas for several weeks, but the school only formally announced her hiring on Monday.

Higashijima comes to the program after spending the last 7 seasons with UCLA, including the last 3 as the program’s associate head coach. UCLA head coach Cyndi Gallagher announced her retirement at the end of last season, which meant a whole new staff for the Bruins.

“It is very exciting to welcome Naya to SMU as our associate head coach,” Collins said. “Naya has had great success at both UC Santa Barbara and UCLA where she helped recruit and develop numerous All-Americans and US National Team members.

“Naya is a great communicator, coach and mentor. Her coaching style enables her to help the team make positive improvements in their swimming, academics and life. I am very excited to see the progress of our team this season and beyond working with Naya at SMU.”

In her 7 seasons at UCLA, the Bruins posted 6 top-25 seasons. The Bruins finished 17th at NCAAs in 2019, although all 75 of their points were scored by divers.

Prior to UCLA, Higashijima spent 6 seasons as an assistant at UC Santa Barbara, a team that sent 13 qualifiers to the 2008 U.S. Olympic Trials. In her 6 years, the school won 12 All-America honors. The men and women combined for 7 Big West Conference titles.

As an athlete at Oregon State, she was a 2-time NCAA All-American in the 200 fly, including an 8th-place finish at the 2003 NCAA Championship meet. That also helped the program, which was cut at the end of last season, to its first NCAA Championship top-25 finish.

Higashijima comes from a hyper-athletic family. Her father, Shinji, was a Japanese National Record holder in the IM and currently works for FINA. Mother, Kaoru, was a National Champion swimmer in college and still coaches. Her brother, Issei, was also a National record holder in the 5k and the team manager at Michigan (2005, 2006), while brother, Sho, was part of the National Championship basketball team at Pima Community College (Ariz.) in 2010 and is currently a coach for a professional basketball team in Japan.

Higashijima replaces another former Oregon State swimmer, Anna Heller, who was hired as an assistant at Arizona this summer.

AWESOME!!! Naya is an amazing person, great coach and great recruiter. So happy for you you!!!

Wow, what an athletic family!

Could not have made a better choice. She is simply FANTASTIC!