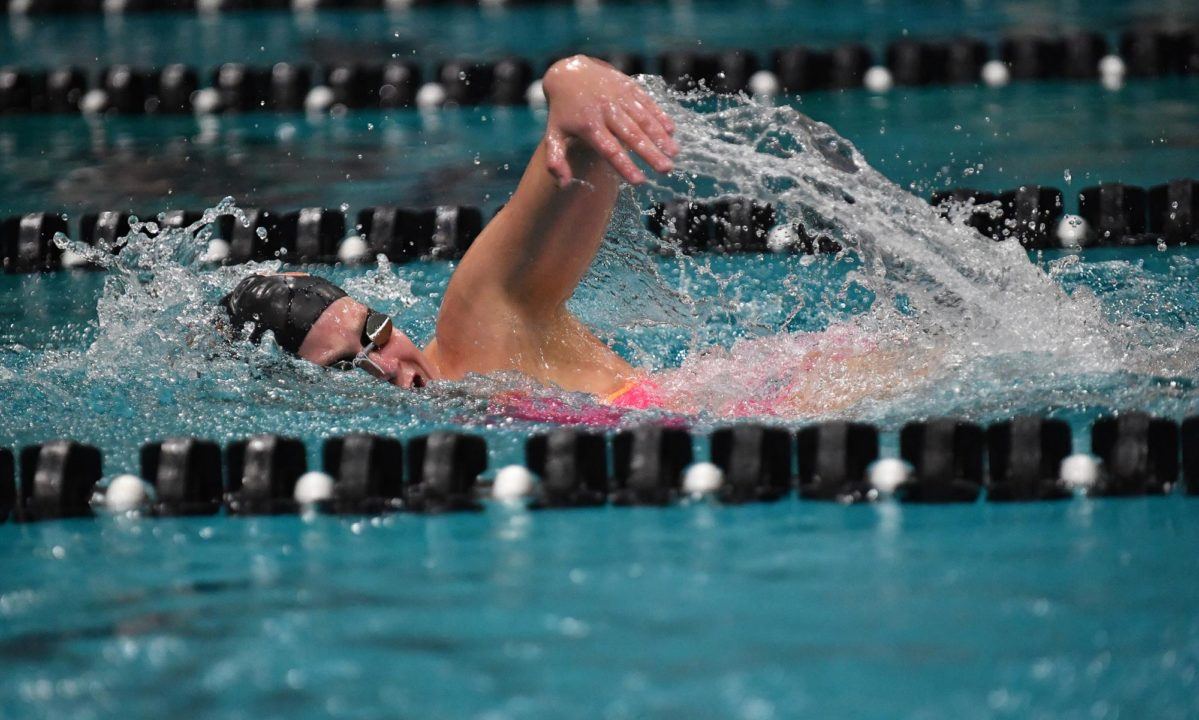 Oregon State announced today that the school will be cutting its swim team. The press release says that the team... Current photo via Oregon State Athletic

Oregon State announced today that the school will be cutting its swim team. The press release says that the team would be “discontinued by OSU at the end of the 2018-2019 season.” The school only had a women’s team, and they finished ninth out of nine teams at the 2019 Pac-12 Championships last week. The Beavers did win what turned out to be their last home meet last month.

The press release, quoting a statement by Athletic Director Scott Barnes, cites a list of reasons, including the cost of building an on-campus pool, for cutting the team. According to Barnes, OSU’s existing facilities “do not meet NCAA standards.” The team hosts home meets at an off-campus city facility, and according to Barnes, it would cost $18-22 million to build a new facility.

As it typical in these situations, the school has promised to honor existing scholarships, or to help students-athletes transfer immediately should they wish to do so. The roster for this past year listed 21 student-athletes, including 10 freshmen. Both head coach Jennifer Buffin and assistant coach Michael Wong have been with the program since 2016.

While the program has had its successes, including a handful of NCAA All-Americans, the Beavers have never finished higher than 7th in the Pac-12 Conference, in which the team began competing during the 1986-1987 school year, when the conference was still known as the Pac-10.

A list of Pac-10 swimming championship results shows that Oregon State had a men’s team until the late 1970s.

While this means that there will no longer be any Division I swimming programs in Oregon, it is still offered at four Division III schools, including George Fox University, Lewis and Clark College, Linfield College, Pacific University, and Willamette University.

Here’s the full text of the e-mail from Barnes:

I am writing to announce that OSU will discontinue intercollegiate women’s swimming at the end of the 2018-19 season.

This decision is based upon the university’s commitment to offer all student-athletes a quality, equitable and competitive NCAA experience in keeping with the Athletics Department’s strategic plan. And to provide quality and equitable facilities for all teams, while balancing financial requirements for athletics facilities.

This decision was not made easily. It followed a comprehensive review of all sports and engaged Athletics Department leadership and the university’s Athletics Financial Sustainability Plan Work Group. This review concluded that Oregon State could not meet its commitments while retaining swimming as an NCAA sport. My decision also was made with thorough consultation with OSU President Ed Ray, who supports this action.

Facility requirements contributed to this decision as OSU campus pool facilities do not meet NCAA standards. As a result, the OSU women’s swim team holds home meets at the city-owned Osborn Aquatics Center, which is not comparable to the competitive swimming facilities at other Pac-12 Conference universities.

Our evaluation determined that it is cost-prohibitive to renovate existing campus swimming facilities. A new collegiate swimming and diving facility would cost $18 to $22 million to build, not including the cost of annual maintenance. Investing in competitive swimming program facilities would negatively impact our ability to serve facility requirements for all sports and all OSU student-athletes.

As a former collegiate student-athlete myself, I am very mindful of our 21 student-athletes and two coaches affected by this decision. I thank Head Coach Jennifer Buffin and Assistant Coach Michael Wong, as well as our swimmers for their many contributions to the OSU swimming program and Beaver Nation. We will fully support swim team members during this transition, including assisting any student swimmers who may seek to transfer to another university to compete. Meanwhile, these student-athletes will retain their athletic scholarships while they continue to make successful progress to graduation.

Meanwhile, the university will continue to support fully student-athlete success in the classroom, in the community and in athletic competition. We will achieve the goals of the Athletics Department strategic plan by maintaining financial sustainability, winning championships and achieving post-season success and national recognition. And we will continue the proud tradition of OSU Athletics by competing and succeeding at the highest levels of intercollegiate sports.

Wake up USA Swimming!
You need a collegiate division that will serve as consultant to help colleges understand the value of our sport and would guide colleges to have self sustainable programs.
Colleges keep cutting swimming and USA Swimming does nothing. If there is no place to swim in college, the dream of many youth swimmers will be over. There is no reason for many youth swimmers to be working their butts off day in and day out if there is not enough opportunity to swim in college.

US Masters swimming recently (first national championship was in 2018 at Georgia Tech) created a division specifically for swimming at the club level in college! Check out their website here: https://www.collegeclubswimming.com

Why the down votes? The phrasing of this comment might be snarky, but it’s the logical conclusion to what’s happening.

Yeah also that club meet has been going on for years, I think it;s just the first time it was linked with Masters.

Usa swimming and the rest of the NGB’s needs to lobby congress to change the ASA so that any federally funded universities have to give 80% of their athletic budgets to Olympic Sports. Why do football teams have 85 scholarships that cannot be split for just 22 players? Total bs and this head in the sand approach needs to stop.

I want swimming to be vibrant and successful. But unfortunately the deal that swimming gets with football currently is already kinda nice. Swimming is expensive and brings in zero money. In fact, it costs well over a million dollars to operate a combined program. It’s just the way the system is set up. Football gets most of the money because if football fails, all the sports fail.

Sadly you are wrong. Most of the football programs in NCAA loose money. That’s a poor excuse.

That’s true, but. OSU earned almost $79 million in revenues from football, and spent $82 million on the program in the last year reported (2017). Those are big numbers for a program that, for better or worse, is the face of the university in athletics (like most D1 schools and all D1 power conference schools). They’ve gotten “too big to fail”. And won’t be allowed to fail. Swimming (and some other sports) will never be there – we’re allowed to fail all too frequently. +/- $20 million needed for a new aquatics facility on top of the annual operating expenses? That, sadly, sounds Iike all the justification they felt they needed. OSU really cannot compete with many of the big… Read more »

Agreed, the actual football program may lose money, but football and basketball are the only reasons that athletic departments receive money in the first place to fund any sport. Conferences pay out TV contract money to schools, and the schools use that money (along with donations) to fund all athletic programs. I want swimming to be successful, but I think we need to continue to find the right niche in the landscape of college athletics to survive. Unfortunately, the sad reality is that millions will be poured into quite unnecessary capital projects to impress football and basketball recruits. Swimming’s best bet is for teams to continue to bring in great people on to campuses, and for those programs to cause… Read more »

Because swimming pales in popularity (and every other way in the public view) compared to football and basketball. Wake up! The public outside of swimmers don’t care at all what Reece Whitley just went in his 100 Breast. They care way more if Trevor Lawrence will win the Heisman Trophy. Why is it that the lowest paid starter on the NBA probably makes 10x more than Jack Conger, Kevin Cordes, Cody Miller, Caleb Dressel, and Ryan Murphy combined. Life isn’t fair all the time. Get over it.

Geez, thats you answer to this? Please don’t put any time into trying to find a solution. I don’t think it would be helpful

The fact of the matter is that no matter how much we love swimming, it will always pale in comparison to football and basketball. Unless MP comes back… 🙂

MP swimming every Monday night wouldn’t do it.

Well put. If Pac-12 Women’s swimming were really important to people, you’d have been able to watch a live-stream of its championship meet last week. But, alas, no.

When a sport brings in 90-95% of the athletic budget…they usually get what they want!

All the D3 schools operate without all that money

So, you think that D3 schools have figured out how to have “free” athletic programs? Hmmm.

D3 schools have pools similar to what a club meet would be at a municipal pool. D1 requires much nicer facilities. Dive tank, 50 meters, stands. Just look at ASU, CAL, STANFORD, INDIANA, those are not cheap facilities.

I’ve seen some D3 facilities that rival what the big D1 schools have.

You lose credibility when you don’t understand what you are talking about. It is true that only 22 players are on the field at a time, but around 40 players will have a significant role on the team. You carry 85 in college with the expectation that you have some developmental players on the team who aren’t immediately ready to play. In the NFL you are permitted to have 53 on the active roster yet every single year due to attrition each team will end up using around 60. So that’s going to be your bare minimum. Also, I don’t have to mention that the demographics for our sports are very different. Your average football player is much more likely… Read more »

Yes – We need congress to intervene in yet ANOTHER aspect of our lives. I have no idea why John Adams, Thomas Jefferson, and Ben Franklin did not foresee this and get it covered in our founding documents.