With Slowest Reaction In The Field, Dressel Splits 49.9 In Mixed Relay 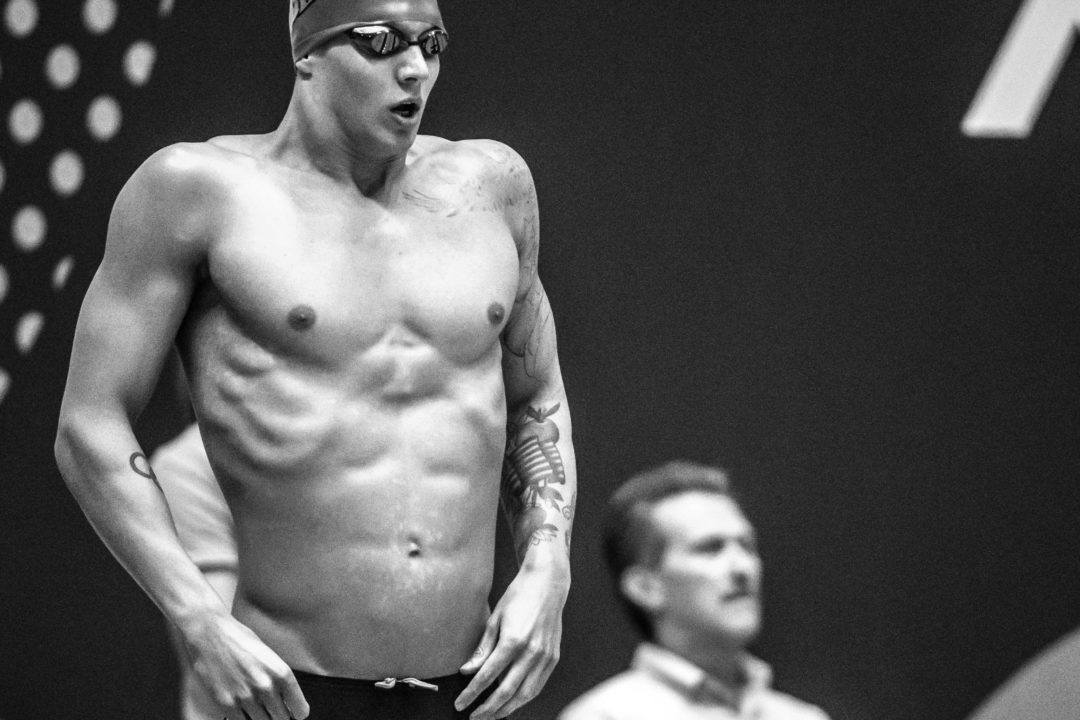 Swimming in the final of the mixed 4×100 medley relay, American Caeleb Dressel registered a scintillating butterfly split as the U.S. won gold and shattered their prelim world record by a wide margin in 3:38.56.

Dressel, who brought his 100 fly best time down from 52.22 to 50.87 at U.S. Trials, split sub-50 in 49.92, the second time it’s been done in history. What’s even more amazing is that he did it despite registering a reaction time of just 0.42. That reaction was actually the slowest out of 24 swimmers in the final who had a relay exchange.

Comparatively, if we take Dressel’s RT from the 100 free semis (0.64), his split translates to a flat-start time of 50.14. That would make him the 3rd fastest man in history, and the fastest ever in a textile suit.

However, before we jump to conclusions we also must take into consideration the split was done in a mixed relay. On lead-off legs, swims aren’t official like they would be in a men’s or women’s relay, due to men and women swimming against one another being inconsistent than an all-male or all-female event.

Regardless of the official rules, Dressel’s swim was incredible. The only split ever faster than that was done by Michael Phelps, who split 49.72 on the medley relay in 2009 after setting the individual world record in 49.82. That meet also saw Milorad Cavic crack the barrier for silver in 49.95, but he didn’t have a relay opportunity to throw down a quick split.

Looking at ‘through the water’ times, subtracting reaction times, Phelps’ individual swim still reigns supreme at 49.13. Cavic was 49.23, and Phelps was 49.36 in the relay. Dressel’s split translates to 49.50.

Though reaction time doesn’t tell the whole story, and is obviously a keep component of the race, it’s the best metric available to compare relay swims and individual flat-start swims.

As we head towards the individual 100 fly, Dressel is set for a showdown with rival Joseph Schooling. However, Dressel will have a tough double for both the semis and the final, having the 50 free semi and final taking place not long before.

The two have already gone head-to-head twice thus far in Budapest, with Dressel coming out on top in both the prelims and final of the 50 fly. He broke the American record in the semis in 22.76, ultimately placing 4th in the final. Schooling was 5th.

From a European perspective its between Dressel and King for most disliked Yank swimmer. Silly Dressel was trying to annoy Proud before the 50 fly. You can also see that Adrian cannot stand him.

I heard Schooling split 49.98 from a push yesterday after a 400 fly set and after he beat a shark too

You know, while I’m all behind team dressel in this Dressel vs Schooling show, I wonder if any of you people commenting (doubting) the 100 fly practice time have spoken to either of the 2 coaches that timed it…

Schooling down to his last chance to medal ? in these WC and can’t be happy to see a multi medal contender pop a 49.9 split.

I don’t want our men and women to be doing extra races that IMO will not stand the test of time. The mixed relay is a sideshow and a distraction.

It’s hard to be overoptimistic when it comes to Dressel but we can still make a distinction between potential and performance. As good as he looks in Budapest and over the past year, let’s wait at least til he wins his first individual medal before we start comparing him to Michael Phelps or Natalie Coughlin or any of the greats.

dressel is the new phelps for American swimming

He’s more like a men’s Natalie Coughlin. Phelps could do any event outside of breaststroke

While I get what you’re saying, don’t downplay Coughlin’s versatility. She’s still the only person to qualify all available events for Olympic Trials in one year.

Actually the best comparison! Not necessarily gonna win gold in everything all the time,but always a medal threat and great for relays.

He’s the Dressel of American swimming – he will cut his own path just fine.

Dressel is the Michael Andrew of bizarro USA swimming.

Wait for him to win an individual gold in world events then we will discuss.

Sorry Jay, the discussion has staryed and you have decided not to be in it.