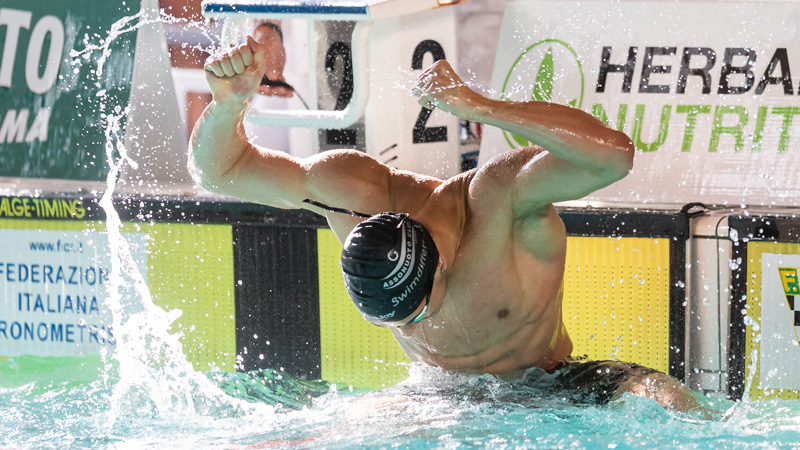 Simone Stefani just busted out a lifetime best of 49.13 to take the men's 100 fly and become the world's 9th fastest man of all time. Current photo via Andrea Staccioli / Deepbluemedia / Insidefoto

The action continued on day two of these Italian Short Course Winter Championships, carrying on after Olympic icon Federica Pellegrini swam the final race of her prolific career.

Adding another World Junior Record to his resume, 18-year-old Simone Cerasuolo notched the winning time of 56.66 in the men’s 100m breaststroke. This was after he already nailed a new WJR yesterday in the 50m breaststroke. You can read up on this teen’s breakthrough performances here.

In the women’s breaststroke events, first Arianna Castiglioni grabbed gold in the 50m, posting a mark of 29.64 as the only swimmer to delve under the 30-second barrier.

Her time here in Riccione actually beat out her season-best of 29.66 which is what she produced in Kazan for gold at this year’s European Short Course Championships. Both times dip under the 29.9 Italian Federation-mandated qualification mark for this month’s Short Course World Championships.

Later in the women’s 200m breaststroke, Francesca Fangio topped the podium in a mark of 2:19.74. That easily handled the field, with the next closest competitor represented by Ilaria Cusinato and her silver medal-garnering 2:23.38.

Fangio has already qualified for Abu Dhabi in this event thanks to her bronze medal performance of 2:19.69 in Kazan.

Cusinato later took the women’s 400m IM, earning a time of 4:32.56 to beat the next closest competitor by nearly 4 seconds.

Lorenzo Mora did damage across two men’s backstroke events on the day, capturing the top spot in both the 50m and 200m distances. In the former, Mora clinched gold in 23.43 while in the latter he earned the same medal result in a time of 1:50.27.

A big-time performance came in the men’s 100m fly, with Simone Stefani busting out a time of 49.13 to destroy the field. The 21-year-old had never before been under the 50-second threshold, entering this meet with a personal best of 50.56 from just last month.

Stefani’s time here easily clears the 49.8 Italian Federation mandated cut for Abu Dhabi but his result also renders him as Italy’s #2 performer all-time. Only national record holder Matteo Ravolta has been faster with his Italian standard of 48.64 from the ISL playoffs.

Looking outside of Italy, Stefani’s 49.13 now checks him in as the 9th fastest performer. His time would have taken gold in Kazan, as well as claimed bronze at the 2018 edition of the FINA Short Course World Championships.