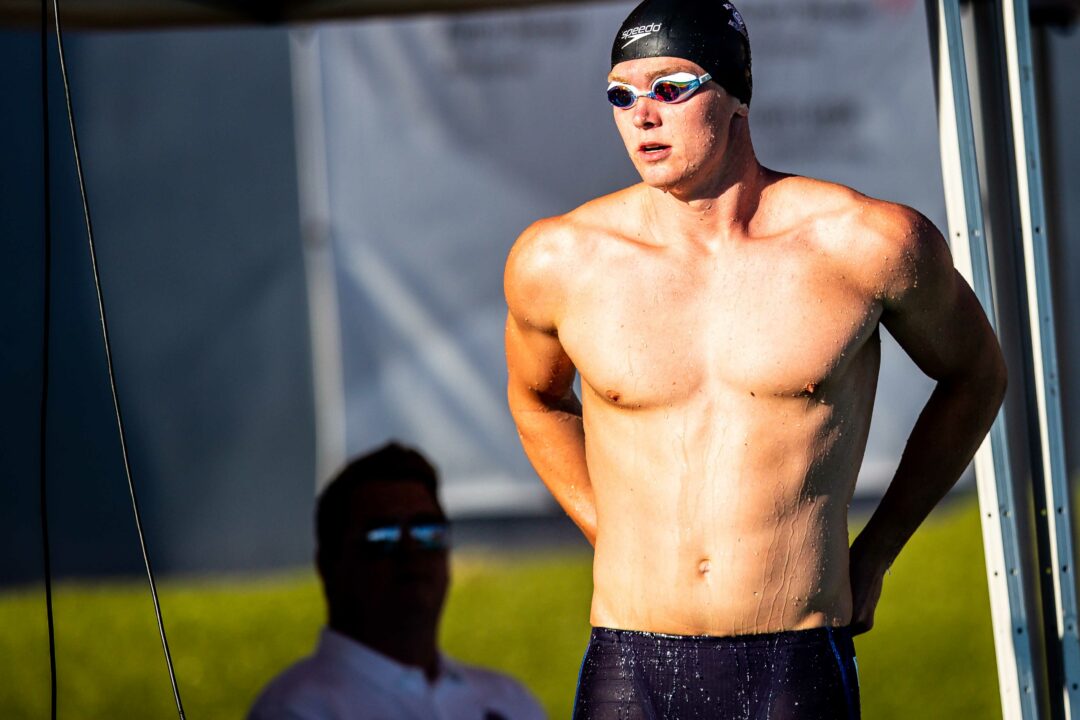 Trenton Julian (above) was the 2021 NCAA runner-up in the 200 fly last season. He's scheduled to swim that same race for the US later this month in Abu Dhabi. Archive photo via Jack Spitser/Spitser Photography

The Bears will visit USC on Friday and UCLA on Saturday.

Cal swimmers Trenton Julian and Hugo Gonzalez will skip this weekend’s Minnesota Invite to focus on preparations for the upcoming World Short Course Championships in Abu Dhabi, a spokesperson for the program told SwimSwam on Tuesday.

“The Minnesota Invite was not in Trenton or Hugo’s plans as they continue to prepare for the short-course World Championships,” the spokesperson said.

The 2021 Short Course World Championships are scheduled for December 16-21.

Julian is scheduled to race for Team USA in the 200 fly individually at the meet. While USA Swimming says that all relay choices will be up to the coaching staff at the meet, Julian should be a candidate for the butterfly leg of any of the three medley relays, for the 800 free relay, and conceivably even a 400 free relay, though the U.S. men’s roster has pretty good sprint freestyle depth.

Julian was the NCAA runner-up in the 200 fly last season, when he also placed 3rd in the 200 free and 4th in the 500 free. He is using a 5th year of eligibility for Cal this season.

Gonzalez will represent Spain at the World Championships. Spain just announced its small roster of just 6 pool swimmers for the meet on Wednesday morning, and Gonzalez is scheduled to swim the 50, 100, and 200 backstrokes, the 200 IM, the 100 free, and the 100 fly. That’s a possible 6 individual events in 6 days of competition, though he might scratch an event.

He’s not entered in the 400 IM for Worlds. That’s a race that he’s put aside in international competition, in spite of having the fastest time at last year’s NCAA Championship meet (albeit out of the “B” final).

His absence from the Minnesota Invite means no showdown with Texas’ Carson Foster. Gonzalez and Foster are the two top returning 400 IMers in the NCAA from last season. Foster is also on the US roster for the Short Course World Championships, but is opting to race in Minneapolis anyway.

The Cal men have exhibited a philosophy of prioritizing international competition over most college meets in the past. In 2016, they infamously sent Ryan Murphy, Josh Prenot, Jacob Pebley, and Jeremie DeZwirek to a Pro Swim Series meet to continue their Olympic preparations instead of the Pac-12 Championships.

With the U.S. World Championship Trials being held from April 26-30, just a month after the NCAA Championships, and other countries possibly selecting even earlier for the unusually-early May dates for the 2022 World Championships, the Golden Bears will have more tough decisions to make at the end of the season.

I have swam the Minnesota Invite in 2018. Too bad they aren’t inviting club swimmers this year.

The meet was very different back then. Only three D1 teams including the hosts