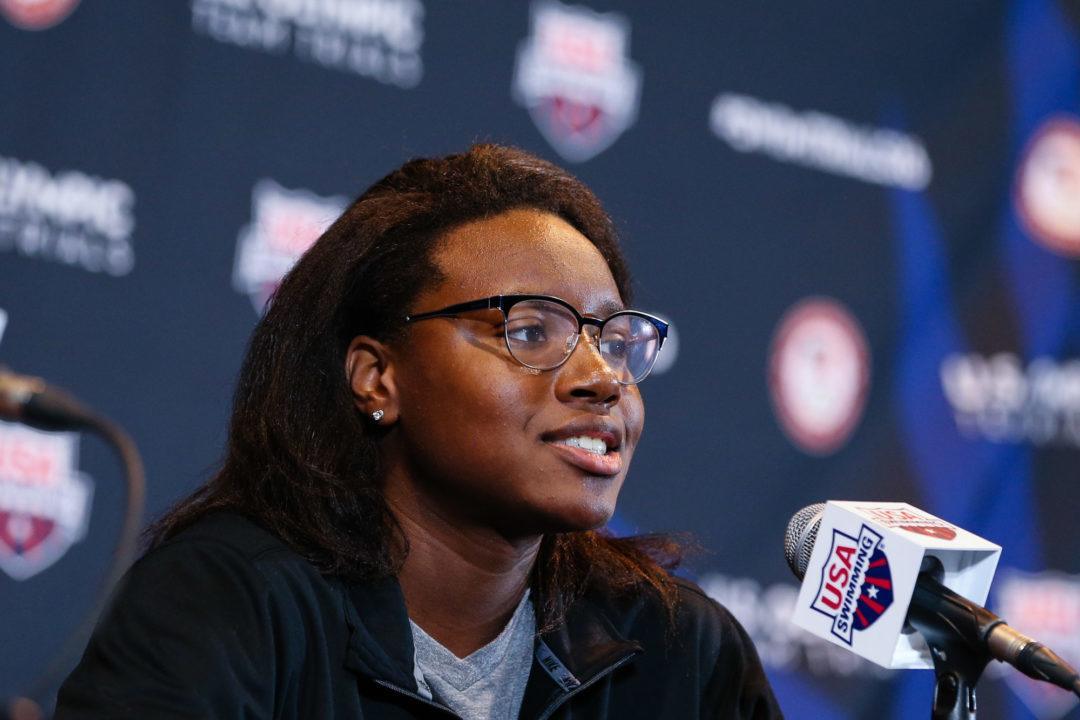 Though exact details have not been released, Manuel's contract stipulation is believed to be the first of its kind in professional sports. Archive photo via Tim Binning/TheSwimPictures.com

Olympic and world champion Simone Manuel announced her first suit deal with TYR Sport Tuesday in Irvine ahead of the 2018 Phillips 66 National Championships, and though monetary details of  her contract have not been made public, it does include an “inclusion rider” believed to be the first of its kind in professional sports.

Inclusion riders are a growing trend found primarily in the entertainment industry that, generally speaking, are stipulations included in an individual’s contract that require cast and crew on a set to meet a given level of diversity (this might entail a certain number of women, people of color, LGBT people, or people with disabilities).

The concept was introduced in a 2016 TED talk by USC professor Stacy Smith, later made famous by Frances McDormand‘s 2018 Oscar acceptance speech in which she concluded: “I have two words for you: inclusion rider.”

The most similar concept in sports until now was the NFL’s “Rooney Rule,” which mandates that teams interview candidates of minority ethnic backgrounds for high-level positions; however, that rule does not require teams to actually hire any of the interviewed candidates.

In TYR‘s official press release Tuesday, it stated the following about Manuel’s rider:

“Through this stipulation Simone ensures that her partners extend meaningful opportunities to traditionally underrepresented groups and that diversity be reflected in the creative efforts she pursues with the brand. TYR believes in the importance of diversity in the workplace and is proud to support Simone in her efforts to champion inclusion as both a best practice in business and a central tenet of her identity as a professional athlete.”

No further information was given about what those opportunities and efforts will entail. However, in her press conference, Manuel referred specifically to those involved in the “production process.” This could potentially include the non-athlete models the company employs, or the crew used to shoot advertisements, among other contributors to the process.

Smith was involved in the writing of Manuel’s rider, Bloomberg’s Eben Novy-Williams reported.

Just hours before announcing her deal, Manuel, 21, penned an article for The Undefeated called “A Letter to My Younger Self,” which highlights her experience growing up as a black person in a predominantly white sport, and the importance of representation. The following is an excerpt from her piece:

“When I felt like quitting, I thought about Cullen Jones, Tanica Jamison, Sabir Muhammad, Maritza Correia (now a good friend of mine). Their stories taught me that my own success was bigger than me, that my dreams should never be limited by the assumptions of others. I was here to carve my own path, to widen the lane for others.

I was not here to apologize for my ambition.

During and after the Rio Games, there were moments when my resolve was tested, when the doubts crept in again. Winning on the sport’s biggest stage has a way of eliciting strong reactions from the public, good and bad. On social media, people applauded my role in history; they also talked about my hair. A lot. They called me the “black swimmer” while commenting on my body in ways that felt minimizing to the effort, dedication and sacrifices it took for me even to arrive on that stage.

I had to summon the strength I borrowed from those who came before me. I thought about Serena Williams and the ferocity she brings to being a champion, the empowering confidence she has in herself. People don’t always like “different” — and it often scares them the most when it’s wrapped in excellence.

Sometimes I feel like I’m alone on an island. Reporters ask me questions that other swimmers, white swimmers, are never asked. They want me to talk about social justice issues, Colin Kaepernick, athlete protests. I want to contribute to the conversation and lead, but I’m not the voice of Black America. And when people single me out like that, they’re reducing me to a label — “the black swimmer” — when I know I am so much more.

Yes, there’s a part of me that feels like I was born to do this, to live a unique and audacious life. Aren’t we all? But there is no limit on black excellence. There were others before me, elite American swimmers who happened to be black, and I can promise you there are more to come, hopefully many more.

Representation matters. People, especially kids, need to see it to believe it can be done. If I could go back in time, I would encourage 12-year-old Simone to embrace the boldest part of herself — the desire and confidence it took to get in the water and stay in. Because it felt like home. I would tell her to honor her passion, letting it fuel her journey while inspiring others.”

Manuel hails from Sugar Land, Texas, and in 2016 became the first black woman to win individual Olympic gold in swimming, winning the 100 free in Rio. She told The New York Times later that year that she “carries the weight of the black community” with her, but hopes one day not to be known as “Simone the black swimmer.”

First off I performed a swim clinic with Simon
Classy lady.
I’m an swimologist.
I run a Swim. Academy.
Working among our people can be a challenge.
Due to we put our kids in singing & dancing.
NEVER swim lessons.
If an disaster accure, how many black people could save them self.
And singing a song doesn’t save you.

Profound and awesome – steps should always be taken to further inclusivity in swimming and Simone has been and will continue to be a role model of confidence, ambition, and success for black swimmers and, by her virtue, all swimmers.

i don’t agree with riders like this because i don’t think they are needed anymore. there are laws against not allowing someone to work or buy a home or whatever based on race, sex, etc. I think those laws need to be enforced to their highest level.

What i am focused on is this comment in her letter: “And when people single me out like that, they’re reducing me to a label — “the black swimmer” — when I know I am so much more.”

I completely agree with her but news stories these days always focus on being the first this or that to accomplish something. Simone is a beautiful and gifted woman with hopefully tons of great swimming… Read more »

Well done Simone Manuel. I hope you enjoy these prime, beautiful, years of your life to achieve your dreams. You earned it!

Fantastic to hear that Simone’s landed a contract, and especially great to hear that she’s advocating for minorities in the swimming community with the leverage she’s earned in the pool. In a sport (swimming as a whole, not just competitive swimming) where young Black children are five times more likely to drown than their white counterparts, participation matters, and anything that can help increase that participation rate in the future is fantastic news!

Forced diversity is not true equal opportunity.
Any company/business/school/whatever should hire the more qualified person or the person who best fits the position, not hire someone unqualified because they’re required to simply based on their sex/race.
That’s actually trying to use sexism/racism to combat perceived sexism/racism.
Using discrimination to show that discrimination is bad makes no sense.

if we had always followed that rule than we would still live in a world where white men are the only people employed. This is a more complicated issue than you are painting, and this is without a doubt a good thing.

And by that logic you don’t even give anybody a chance to prove otherwise. Merit based value is easily the best way to evaluate employees. Scottish Dragon is advocating for meritocracy whereas you immediately throw white males under the bus in the name of equality.

It’s funny that you think that making sure to hire a diverse work force = hiring unqualified people. People of color have been denied opportunities throughout this nation’s history, and it didn’t stop because Congress passed the Civil Rights Act in the 1960s. We continue to live with the impacts of discrimination of all types, from the redlining policies that prevented minorities from getting mortgages in most parts of major cities, to bias in hiring, pay, education, criminal prosecutions, etc, etc, etc. Making some whites feel like they’re being victimized by minorities having equal shots at opportunities is a major theme of our society today; we have a president who has built a political movement by basically arguing for the… Read more »

It’s not about hiring someone purposely for diversity. The problem is if you have 5 white people and 1 person of color applying for the same job, and they are all equally qualified, stats tell you it will be a white person hired, because numbers. This is a common misconception with affirmative action. It’s giving the equally lqualified minority a chance over the majority. Otherwise it will just always be white people in the work force, which is kind of where we are today.

When you have humans with implicit bias hiring people, determining who is “most qualified” isn’t cut and dried. Studies have shown that when hiring managers are shown identical resumes with one of the fake candidates using a “black sounding” name, that fake candidate is less likely to get an interview. While those hiring managers may think they are color blind, implicit bias that is present in all of us can creep in. Additionally, as someone who has been on a hiring panel before, determining the “most qualified” applicant isn’t straightforward. One applicant might have better educational background but less experience. One may have great experience but little formal education. Another might have average employment history and education but perform very… Read more »

That letter is beautiful. What a smart young woman. She could lend a part of her big IQ to another famous American swimmer….
Way to go Simone!

Bobo, Mon Cheri, let me guess: does his name start with IV?

I assumed Bobo meant Lochte, and assuming that’s what he meant this comment is gold 😂

IQ has nothing to do with High Level performances – but BOBO doesnt know it as yet – as he doesnt swim himself on a regular basis .

Very proud of this young Texan.