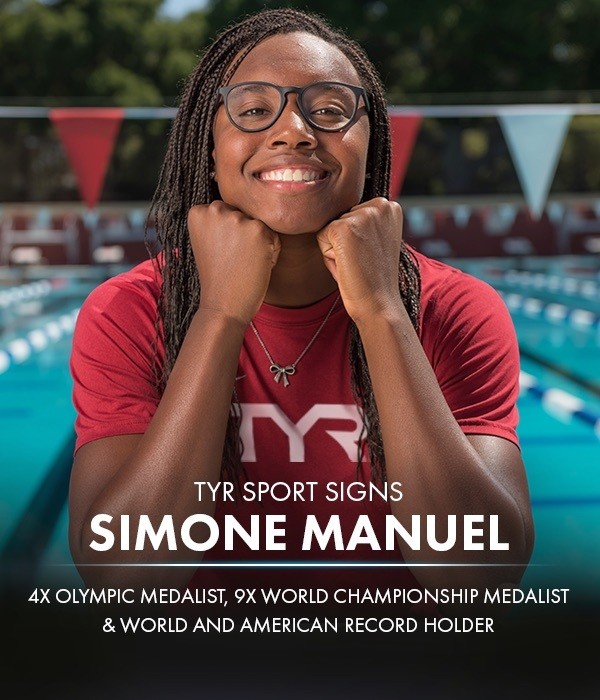 The last of the three big sponsorship dominoes has fallen, with Olympic and World champion sprinter Simone Manuel announcing a sponsorship deal with TYR. Archive photo via TYR Sport

The last of the three big sponsorship dominoes has fallen, with Olympic and World champion sprinter Simone Manuel announcing a sponsorship deal with TYR.

Manuel is one of three massive names turning pro this year, a group that one industry insider called “the most marketable swimmers to go pro since Michael Phelps.” That trio – made up of Manuel, Katie Ledecky and Caeleb Dressel – holds 9 Olympic and 28 World Championships gold medals between them. TYR has now nabbed two of the three. Manuel’s Stanford teammate Ledecky was the first to announce her suit deal, signing on with TYR back in June. Dressel signed with Speedo just last week, leaving Manuel the only one of the three yet unsigned.

Manuel is iconic for her clutch performances on the international stage. In each of the past two years, she’s upset a world record-holder in the 100 free to win the world’s biggest medal of that season. In 2016, she beat Australia’s Cate Campbell (who had broken the world record only a month earlier) to become the first black woman of any nationality to win Olympic gold in swimming. Last summer, she topped Sweden’s Sarah Sjostrom (who had just broken the world record only days earlier) to win World Champs gold.

She confirmed in March that she’d turn pro after her third collegiate season. Manuel was a freshman in the 2014-2015 season, then sat out with a redshirt season in 2015-2016 to prepare for the Olympics before returning to the NCAA for the next two seasons. She’ll continue to train at Stanford.

Manuel won two golds and two silvers in her Olympic debut in Rio. She has seven long course World Champs golds along with two bronzes, spread between the 2015 and 2017 editions of the World Championships. The 21-year-old Manuel is set to compete at U.S. Nationals this week, hoping to qualify for both the 2018 Pan Pacs and 2019 World Championships.

With Manuel off the market, a handful of Olympic gold medalists remain without announced suit deals. Singapore’s Joseph Schooling signed with Speedo in May. Ryan Held, Blake Pieroni and Gunnar Bentz have yet to announce suit deals.

“My identity as a citizen, a Black Woman, an athlete and as a creative who wants to use her platform to effect positive change is multi-faceted, and a partnership with TYR represents all of those elements,” stated Simone. “Both TYR and I share a passion for winning and a common vision for growing the sport of swimming by connecting with people and encouraging them to dream beyond traditional assumptions. I am so thrilled to partner with them.”

“Simone Manuel is a force to be reckoned with, both in and out of the water,” began Matt DiLorenzo, Chief Executive Officer of TYR Sport. “Watching her become one of the world’s most groundbreaking names in the sport of swimming has been nothing short of inspiring. As a brand, we could not be more proud to welcome Simone to our growing family of TYR sponsored athletes. We are confident that in working together we will create products that not only take performance to the next level, but ultimately continue to change the course of history.”

At just twenty years old sprint specialist Simone Manuel turned heads at the 2016 Summer Olympic Games in Rio de Janeiro, Brazil, where she earned gold medals in both the 100m freestyle and the 4x100m medley. Her impressive finish in the 100m solidified Simone as the first African-American woman to win an individual Olympic gold in swimming. During this performance she also set a new Olympic and American record. In addition, Simone won two silver medals for her swims in both the 50m freestyle and the 4x100m freestyle relay. As a former Stanford University athlete she holds three world records for her relay team participation and is a six-time individual NCAA Champion.

Simone’s partnership with TYR marks the first time an inclusion rider has been integrated into an athlete sponsorship agreement. Through this stipulation Simone ensures that her partners extend meaningful opportunities to traditionally underrepresented groups and that diversity be reflected in the creative efforts she pursues with the brand. TYR believes in the importance of diversity in the workplace and is proud to support Simone in her efforts to champion inclusion as both a best practice in business and a central tenet of her identity as a professional athlete.

Since its inception three decades ago, TYR Sport has grown to exist as one of the world’s most recognizable swimming and triathlon brands. Founded in Huntington Beach, California, the American company has garnered industry success for major technologies including the celebrated Avictor technical suit. Today, TYR has become synonymous with the most groundbreaking athletes in swimming and continues to be the choice of champions.

About TYR
Named for TYR, the Norse god of warriors, our company is committed to cultivating a culture of greatness, both in and out of the water. Through vision and American ingenuity, we have become a brand synonymous with the athlete. From the planning stages to the production floor, everything we do revolves around synthesizing creativity, experience and competition. For us, engineering the most advanced performance products is more than just a goal, it’s a requirement.

TYR Sport is a SwimSwam Partner.

they are really not into Americans swimmers, arent they?

What do you guys think Arena’s next move?

Arena USA is for sale for the third time in the past 8 years. They need to find someone to run that company properly!

They have Sarah and Adam though.

Thats it !! well one Guys

CONGRANTS to her! and to TYR!