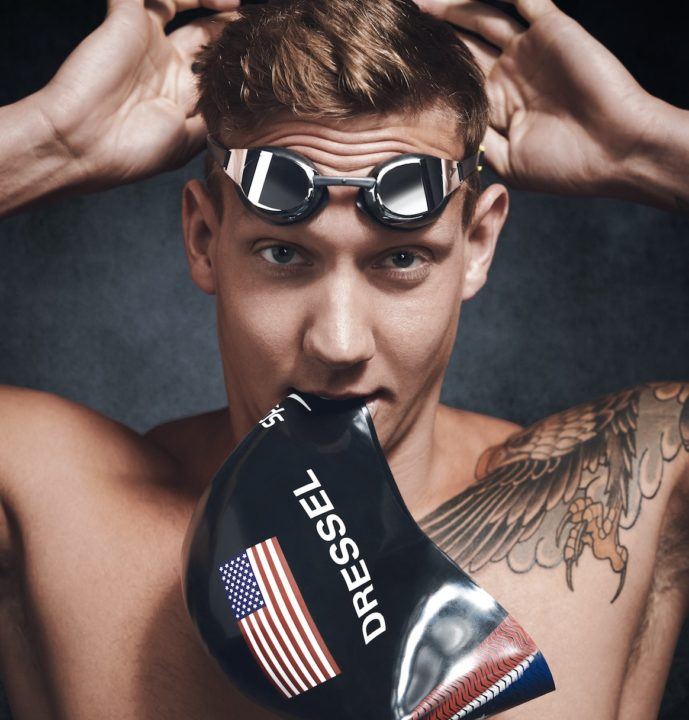 After leaving the swimming community to wonder for nearly four months, swimming superstar Caeleb Dressel has chosen to sign a sponsorship deal with swimwear brand Speedo. Though Dressel does not technically own a single individual world record, his performances in short course yards have fans guessing not just which world records he can break, but which world records he actually wants to break this summer, as there are seemingly too many options for one man.

“Signing with Speedo USA has been a surreal first step in my professional career. The support of Speedo USA and my new Team Speedo USA teammates is going to be incredibly important as I train to reach my goals. I look forward to joining the ranks of the incredible athletes who have worn Speedo when it’s mattered most.”

Terms of the deal have not been announced, but in terms of market-setting, we do know that Katie Ledecky‘s June-announced deal with TYR was worth $7 million. Ledecky, Dressel, and Ledecky’s Stanford teammate Simone Manuel are part of a three-legged class of new pros that is the biggest new group to hit the market in recent memory, if not ever.

However, Speedo USA executive John Graham told Yahoo Sports’ Pat Forde: “It’s a really good plan to incentivize him to be the best,” hinting at performance-based incentives. He added, “He has that really distinctive style, and the bold look to match. Then you find out how humble he is. Athletes like him are few and far between.”

“Caeleb is a star, plain and simple. Our goal with Team Speedo is to always build a complete, well-rounded roster of world-class swimmers who will embody Speedo in and out of the pool and connect with our fans across the country. The addition of Caeleb is certain to be part of that tradition, and we cannot wait to see how he grows and shines in our brand in the years to come.”

As a Speedo athlete, Dressel is once again on the same team as fellow 2016 Olympic gold medalists and former Bolles teammates Joseph Schooling and Ryan Murphy. The trio of Dresssel, Schooling, and Murphy also shared the College Swimming Coaches Association of America (CSCAA) Male Swimmer of the Year honors in 2016 for their performances at the 2016 NCAA Championships.

Though he was already breaking monumental barriers as a high school swimmer, including notching times of 18.94 in the 50 freestyle and a 45.89 in the 100 butterfly, Dressel made his true debut as a contender for the American sprint crown when he won the 50 freestyle at the NCAA Championships as a freshman in 2015. Though he did not swim at the 2015 World Championships in Kazan, Dressel won both the 50 and the 100 frees at the 2015 U.S. National Championships in San Antonio.

Dressel began to truly assert his dominance during the 2016 NCAA season, picking up two new titles in the 50 and 100 freestyles, with NCAA, American, and US Open Records in each. In June of 2016 Dressel made his first Olympic team by qualifying 2nd in the 100 freestyle, behind Nathan Adrian and .03 ahead of NC State’s Ryan Held. In Rio Dressel led off the American 4 x 100 freestyle relay, changing over to Michael Phelps, who alongside Held and Adrian went on to win the gold medal. Dressel placed 6th individually in the 100 freestyle, which put him on the prelims team of the 4 x 100 medley relay, which also won gold in finals, though with Adrian as anchor.

At the 2017 NCAA Championships, Dressel won the 50 free, 100 free, and 100 fly, setting new NCAA, American, and US Open Records in the latter two. His 100 free was particularly impressive as he registered a time of 40.00, nearly becoming the first man to go sub-40 seconds in the 100 yard freestyle. If the spring of 2017 was electrifying for Dressel fans, the summer was better. At the 2017 FINA World Championships in Budapest, Dressel won 7 gold medals and set American Records in the 50 and 100 freestyles, lowering times that had been set during the summer of 2009 and the “suit era.” Perhaps the biggest surprise of the entire competition was the 100 fly which Dressel won by three-quarters of a second in a mind-boggling 49.86, just .04 shy of Michael Phelps‘s 2009 suited World Record, making him the 2nd-fastest performer in history. At the end of the meet Dressel was recognized as the 2017 FINA Male Swimmer of the Year alongside Sweden’s Sarah Sjostrom who won the female accolade.

During his final season as an NCAA athlete and University of Florida Gator, Caeleb Dressel redefined what is possible in swimming and broke seven NCAA, US Open, and American Records. First, at the SEC Championships, Dressel obliterated the records in the 200 yard IM, notching a 1:38.13. Later, Dressel popped a 50.03 in the 100 breaststroke to eek under Kevin Cordes‘ 2014 record by .01. Though Dressel would lose his 100 breaststroke record to Indiana’s Ian Finnerty at the 2018 NCAA Championships, he reset his own record in the 50 freestyle three times, starting with an 18.11 in prelims, followed by a 17.81 200 free relay lead off in finals, and ending with a 17.63 less than an hour later to win the 50 for the 4th-consecutive time. The following day he lowered the 100 butterfly record to a blistering 42.80. On the final night of competition, Dressel won the 100 freestyle in 39.90, which earned him a prolonged standing ovation. For the 3rd-consecutive year, Caeleb Dressel was named CSCAA Male Swimmer of the Year.

Tabbed as one of the three most marketable swimmers to go pro since Michael Phelps by Fitter and Faster Swim Tour’s Founder and CEO David Arluck, Dressel’s signing comes just weeks after 5-time Olympic gold medalist Katie Ledecky‘s announcement to sign with TYR. Now only Simone Manuel, the 2016 Olympic gold medalist and 2017 World Champion in the 100 freestyle and the first black woman of any nationality to win an Olympic gold medal in swimming remains as-yet unsigned.

Caeleb continues to train with coach Gregg Troy at the University of Florida in Gainesville. He lives with his puppy, Jane.

See the official release from Speedo USA below:

“Caeleb is a star, plain and simple,” said Speedo USA President John Graham. “Our goal with Team Speedo is to always build a complete, well-rounded roster of world-class swimmers who will embody Speedo in and out of the pool and connect with our fans across the country. The addition of Caeleb is certain to be part of that tradition, and we cannot wait to see how he grows and shines in our brand in the years to come.”

Dressel, 21, who won gold in two events at the 2016 Olympic Games in Rio de Janeiro (Men’s 4×100-meter medley relay and 4×100-meter freestyle relay), reached superstar status during the 2017 FINA World Championships in Budapest. There, he became the first-ever swimmer to win three gold medals in a day and only the second swimmer to win seven gold medals in a single meet, earning him the title of “Male Swimmer of the Meet.”

“Signing with Speedo USA has been a surreal first step in my professional career,” said Dressel. “The support of Speedo USA and my new Team Speedo USA teammates is going to be incredibly important as I train to reach my goals. I look forward to joining the ranks of the incredible athletes who have worn Speedo when it’s mattered most.”

Dressel will be featured prominently in Speedo USA’s year-round national marketing, media and digital campaigns, as well as at point-of-sale with major retail partners in the U.S. Outside of the pool, he and Team Speedo USA’s athletes serve as ambassadors for Speedo USA’s Speedo Fit aquatic fitness program, swim and sun safety initiatives, and as inspirational figures for swimmers of all ages.

Dressel will continue to train with his collegiate Coach Gregg Troy, now at the helm of Gator Swim Club in Gainesville, Fla.

About Speedo
Speedo is the world’s leading swimwear brand. The teams at Speedo are passionate about life in and around the water, creating revolutionary new technologies, designs and innovations, and supporting swimming from the grassroots to the elite level. In the 1920’s Speedo made history with the Racerback, the world’s first non-wool suit. In 2008, Speedo redefined swimwear again with Fastskin LZR RACER, one of the fastest and most technologically advanced swimsuits ever created; 2011 saw Speedo unveil another world first with the Fastskin Racing System – a cap, goggle and suit designed to work together as one.  Speedo is owned by Speedo Holdings B.V. and distributed in over 170 countries around the world; in North America and the Caribbean, Speedo is licensed exclusively to Warnaco Swimwear Inc., a wholly owned subsidiary of PVH Corp. To find out more, visit www.speedousa.com.

About PVH
With a history going back over 135 years, PVH has excelled at growing brands and businesses with rich American heritages, becoming one of the largest apparel companies in the world. We have over 36,000 associates operating in over 40 countries and nearly $9 billion in annual revenues. We own the iconic CALVIN KLEIN, TOMMY HILFIGER, Van Heusen, IZOD, ARROW, Speedo*, Warner’s, Olga and Geoffrey Beene brands, as well as the digital-centric True & Co. intimates brand, and market a variety of goods under these and other nationally and internationally known owned and licensed brands.

*The Speedo brand is licensed for North America and the Caribbean in perpetuity from Speedo International Limited.

not really, if you’re on the mizuno hype train than that’s about it, and even then it isn’t proven. The LZR X is comparable to the avictor and the carbon pro (another suit that hasn’t changed in many years and was out before the LZR X). If it was outclassed than no one would choose to buy it, yet thousands of people across the world do.

Actually— there’s a reason why SPEEDO CONTRACT COLLEGES ARE HAVING THEIR ATHLETES WEAR MIZUNO AT NCAAs… because it’s the best suit out there. It’s not even close

I literally asked them if they would make a new “Dressel suit” and they liked the comment without saying anything… I predict a new suit either for 2019 or 2020, it’s too late now to announce it.

On instagram, @speedousa claimed that Dressel’s favorite suit is the elite 2, but I’ve only seen him in the X.

For SECs and prelims at NCAA he wore a lzr elite, as well as in many of his recent long course races

Congrats to CD and Speedo! He for sure will be a great ambassador for them!!

Apparently the wait is for the ink! Can’t wait to see him fly like an eagle on top of water!

Me too man. How ever will be break TWENTY FIVE?