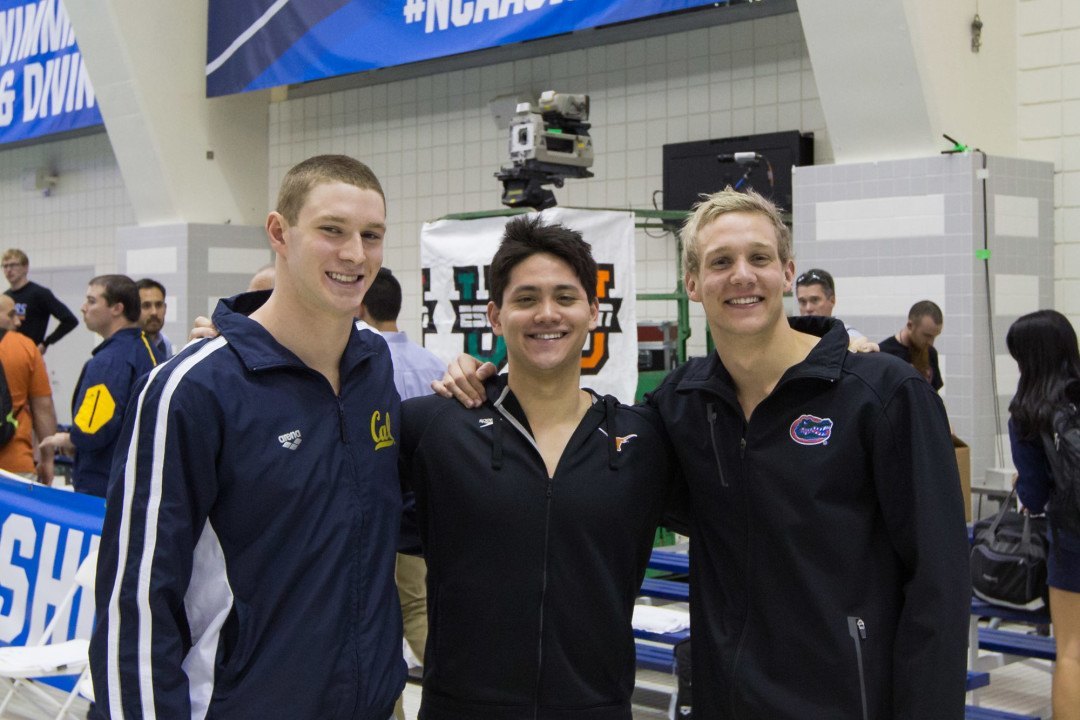 A back shot of Cal’s Ryan Murphy stepping up for the 200 IM. Photo Credits: Tim Binning/TheSwimPictures.com

Picking between the three became increasingly difficult as the meet went on, and ultimately the CSCAA went with the easiest option: letting the three former club teammates share the award.

Each swimmer won two individual events and broke national records in both.

For Murphy, the award was about outright historical dominance. The Cal Golden Bear didn’t just win both backstrokes, he obliterated the fields and all of history. He twice broke the American 100 back record, taking it from 44.07 all the way to 43.49. He also became the first man ever under 1:36 in the 200 back, going 1:35.73 to become the fastest in history by more than a second.

For Schooling, the award coincides with one of the most dominant team efforts in NCAA history. Texas obliterated the competition this week, thanks in large part to Schooling’s efforts on all 5 relays, plus his U.S. Open records in the 100 and 200 flys. Schooling was 44.01 to take nearly two tenths off a 100 fly record from the super-suit era, then went 1:37.97 to become the first man under 1:38 in the 200 fly.

Caeleb Dressel‘s response after smashing his own records with a 18.20 in the 50 free. Photo Credits: Tim Binning/TheSwimPictures.com

For Dressel, the honor comes after the most sheer speed college swimming has ever seen. Dressel was both absurdly fast and incredibly consistent in the 50 free, swimming four of the five fastest 50 freestyles in history all within a single day on Thursday. Between 200 free relay leadoff legs and the individual 50 free, Dressel went 18.32, 18.29, 18.24 and 18.20, getting faster with each swim. He also broke the NCAA and U.S. Open 100 free records with a 40.46.

In addition, was second in the 100 fly, tying him with Texas’s Will Licon for the most individual points scored at 57. Dressel also tied for the second-best 50 free split in history, anchoring the 200 medley relay in 18.00.

Here’s a quick lookback at a few photos stored in our vault back when the trio were Bolles School Sharks teammates:

Each of them now a proud holder of at least one Olympic gold medal!!

I would put Dressel as first among equals because he swam so many relay races for his team. That he could go as fast as he did on Day 4 is astounding.

Thanks Sergio Lopez Miro for his post: great attitude in everything, also in reminding who, like D’Alessandro, is performing exceptionally well in and out of the pool.
Dressel, Murphy and Schooling made extraordinary efforts at these finals: the tie is perhaps the easiest but also the best choice.

Historical meet for these guys.
All 3 can medal in Rio.
But the 2 Americans have first to qualify.

This shows great class and integrity by Sergio. He puts the athletes first and wants them to reach their full potential, knowing it will happen under the guidance of their college coaches. Sergio doesn’t get the glory, but he has the satisfaction of knowing his work was essential in the career development of these great young men.

Watching these past three years the men’s NCAA Championships is a conformation that the work our coaching staff did at Bolles was right. When I got to Bolles i told the coaching staff that our job was going to develop a well rounded studen-athlete that the next coach (college) will take him/her to the next level. It is a hard task because as a coach you always want the swimmer to swim faster and faster under you and many times we forget the long term career of that swimmer.

I could not be prouder of Ryan Murphy, Joseph Schooling and Caeleb Dressel for being named Co-Swimmers of the 2016 NCAA Championships. I believe the first time in history that three… Read more »

When do we find out Pick Em results? We haven’t even gotten a score update throughout the meet.

This award used to be voted on by each school (1 vote per school) at the championships. If this is still the process it is amazing that they all received the same amount of votes.