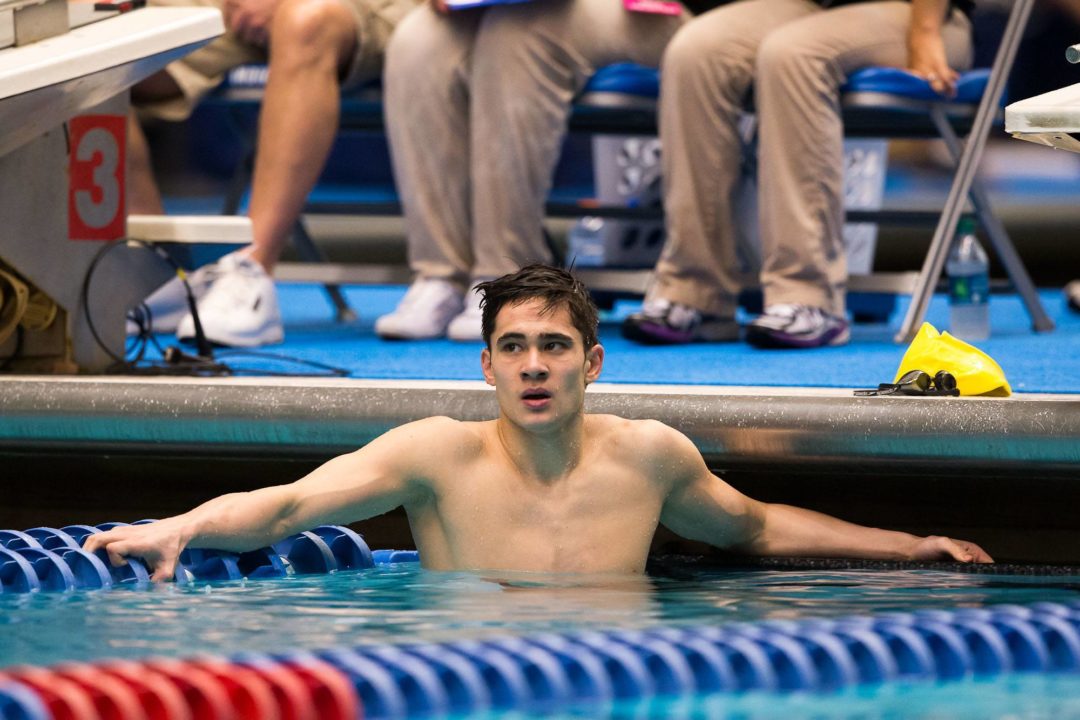 Day 1 of the 2014 Canadian Trials were, to be completely honest, disappointing. There were a few highlights, yes, like Brittany MacLean’s 200 free, which gives big hope for her 400 and 800 free swims later in the meet.

Headed into night two, things don’t look a whole lot better. Of course, this meet is relatively thin, with many of the mid-level swimmers skipping to focus on college exams, so some of the stars may have just cruised into finals.

Among others, watch for top seed in the men’s 100 breaststroke Richard Funk to put in a good swim, and look for someone like Luke Peddie or Coleman Allen to step up in the men’s 100 free final (18-year old Yuri Kisil was the top seed out of prelims in 49.87).

PPO’s Victoria Poon, who will be one of the headliners of the new Montreal Intensive Training Program, used her veteran prowess to dominate a young field in the women’s 100 free with a 54.67 second victory.

That makes her the only swimmer in the final under the Canadian “A” standard, which puts her into the 2nd priority and gives her a near-guarantee of individual swims in the 100 free at both the Commonwealth Games and the Pan Pac Championships.

Going a step further, the top four of Poon, Sandrine Mainville (55.29), Alyson Ackman (55.48), and Michelle Williams (55.57) added up to 3:41.01. Minus the 1.8 second allowance for “takeoffs,” puts them .03 seconds under the Canadian “top 8” standard for relays. This means that those three are likely to get summer invites as relay swimmers.

The men’s 100 free final showed a lot of high-potential swimmers, however with the retirement of Brent Hayden, this is a struggling Canadian sprint group, and nobody qualified for the Commonwealth Games or Pan Pac Championships out of the event.

18-year old Yuri Kisil from the Cascade Swim Club won the race in 49.87. While that is the fastest time by a Canadian 18-year old since Joel Greenshields in 2006, it was short of the 49.12 Canadian standard for the summer’s championship meets.

Dominique Massie-Martel, the veteran of this A-Final, was 2nd in 49.98; Luke Peddie was 3rd in 50.41, and Stefan Milosevic was 4th in 50.76. That aggregate time was well short of the needed time to qualify, so the Canadians won’t send any relay swimmers in this event either.

Winning the B-Final was Tom Kremer, who is an American but represents Israel internationally; and Anze Tavcar (50.70), who swims for Indiana University.

UBC’s Tera van Beilen won the women’s 100 breaststroke in 1:08.39, which left her .03 seconds shy of the selection standard. She’s already easily qualified for the meet under priority 2, however, so odds are that she’ll be given the chance to swim this race over the summer as well.

Three of the top four in this race swam at the NCAA Championships two weeks ago, and some have handled it better (or maybe just differently) than others. Pasloski, for example, crushed her lifetime best, Nicol was right on top of it, and 4th-place finisher Ashley McGregor (1:10.03 – Texas A&M) was pretty far off of it.

Advantage goes to van Beilen, who has been able to time out her season a little better for this meet.

University of Michigan swimmer Richard Funk won his second-straight trials meet in the 100 meter breaststroke, touching in 1:01.43. His time, though, was still shy of what was needed for consideration for this summer’s meets without a discretionary selection.

Meanwhile, 17-year old Matthew Ackman had a huge drop of almost two seconds over the course of the day to finish 2nd in 1:02.13. He’ll join the team at SMU in the fall where he’ll join women’s 3rd-place finisher Nicol (though the men’s and women’s teams are administered separately there).

Igor Kozlowskij of Lithuania won the B-Final in 1:02.11, followed by 16-year old Ryder McGinnis in 1:02.97. McGinnis has about a year to drop four-tenths and break the Canadian 15-17 National Age Group Record in that race.

The best in this field saved their best for finals, and Erika Seltenreich-Hodgson swam the best swim of Thursday’s finals with a 4:40.07 in the women’s 400 IM final.

She used a fantastic breaststroke leg (she was the only swimmer in the top 7 to split under 1:20), and that carried her to a new Meet Record – breaking the 4:40.10 done by Alexa Komarnycky in 2009.

For the first time tonight, multiple swimmers went under the “priority 2” top-16 time in this 400 IM final, with teenager Emily Overholt from West Vancouver taking 2nd in 4:42.84.

American-based high school student Sydney Pickrem, who like Overholt was also born in 1997, took 3rd in 4:45.75

Marni Oldershaw was one of only three swimmers in the A-Final to add time from prelims, and she took 4th in 4:49.15. She looked good early in her swim, but her breaststroke leg suffered, leading to a second-and-a-half slip.

The Canadian men woke up a little in the men’s 400 IM final, earning their first “priority 2” (aka, probable to be taken) qualifiers of the night. Alec Page and Luke Reilly battled in this race back-and-forth.

The two swim virtually opposite races. Page was a second ahead at the completion of the opening butterfly leg, but then Reilly fought back on the backstroke, and the two put up matching 2:04.2’s halfway. On the breaststroke leg, it was again Page who pulled way ahead, almost two seconds ahead, and then Reilly fought back again on the freestyle leg. Coming into the final stroke, though, the advantage went to Page, as he touched in 4:15.80 for the win. Reilly was 2nd in 4:15.86.

Those two were both well under the “top 16” times for Canada, and both should swim at the Commonwealth Games and Pan Pacs this summer.

Sinead Russell beat Brooklynn Snodgrass in the women’s 50 backstroke final, though no qualification spots were on the line, 28.49-28.52, with Paige Miller coming in 3rd in 28.56.

Snodgrass, who trains at Indiana in the U.S., and Miller, who trains at Texas A&M in the U.S., were both NCAA Champions two weeks ago; but it’s Florida’s Sinead Russell, a fantastic long course swimmer, who has won both of the backstroke titles so far this week.

On Friday in the 200 back, in addition to Snodgrass, she’ll face a pair of 200 meter specialists in Hilary Caldwell and Dominique Bouchard: neither of whom has had to contend with the NCAA championships. That should make for a very interesting race.

Russell Wood of the Cascade Swim Club won the men’s 50 backstroke in 25.69; like Russell before him, that doubled up on his win in the 100 back from Wednesday.

Tera Van Beilen already won the 200 breastroke yesterday, so has already qualified under priority 2 (if I read the very complicated rules correctly) so she won’t need a discretionary selection.

Catherine – that is correct.

So does that mean Josh Dow qualifies in the 100 Backstroke because he placed top three or what is the message there?