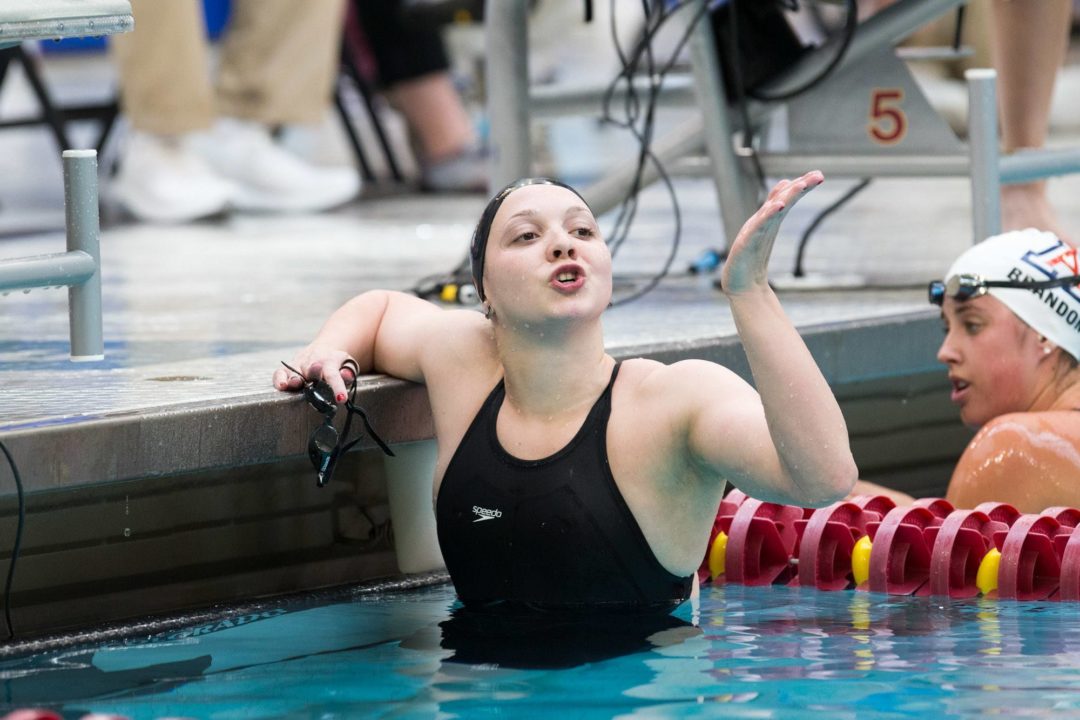 Brittany MacLean of Eswim has been have a fantastic competition winning the 200 and 400 freestyle with ease coming off a fantastic NCAA Championships representing the University of Georgia. MacLean went into the 800 freestyle with a lifetime best of 8:33.70 and came out with a new national record time of 8:24.91. She beat Brittany Reimer’s 2005 record of 8:27.59 by almost three seconds.

MacLean and 400 freestyle silver medalist Tabitha Baumann of the Edmonton Keyano Swim Club went out ahead national record pace through 400 meters with MacLean turning in a time of 4:12.17 followed by Baumann who turned in a time of 4:13.68.

MacLean continued to increase the time between her’s and Reimer’s splits going in the final 400 meters winning the event in a time of 8:24.91 breaking Reimer’s national record by almost three seconds. Her time also puts her in fourth place in the world rankings.

“I got in there and felt good and went for it,” MacLean told announcer Chris Hindmarch-Watson.

“I was thinking about it (the record).”

In last night’s 100 butterfly Katerine Savard had a fantastic race winning the event in a time of 57.27 breaking her own national record. On the final night of competition Savard was looking to follow that performance up with another win in the 200 butterfly, but would have to out swim Canadian record holder Audrey Lacroix to collect the gold.

Lacroix finished second in a time of 2:08.84, a season’s best which puts her in fifth in the world rankings.

Breanna Maclean of the West Vancouver Otters Swim Club finished in third posting a time of 2:13.21.

Zack Chetrat of the Toronto Swim Club pulled out the win in the men’s 200 butterfly touching in a time of 1:59.00. Chetrat, who missed the Canadian Olympic team in the event by two one-hundredths of a second, was able to hold off 400 IM national champion Alec Page who finished second in a time of 1:59.65.

Mack Barragh of the Oakville Aquatic Club collected the bronze finishing in a time of 2:00.10.

World Championships semi-finalist Victoria Poon won the women’s 100 freestyle earlier in the event posting a time of 54.67, which was under the top 16 selection time. Poon returned to the pool on the final night of competition at the Canadian Trials and took the women’s 50 freestyle in a time of 25.29, just missing the top 16 selection time of 25.23.

Sandrine Mainville, who won the 50 butterfly and finished second to Poon in the 100 freestyle, took the silver in a time of 25.30 followed by Chantal Vanlandeghem who posted a time of 25.49.

In an area that is a weakness for Canadians it was no surprise that all three men missed the top 16 selection standard of 22.25.

It has been two years since Erika Seltenreich-Hodgson has achieved a best time in the 200 IM, something she was able to accomplish on the final night of competition in Victoria, taking the event in a time of 2:12.26. Seltenreich-Hodgson’s previous best was a 2:12.93 which she posted in 2012 at the Junior Pan Pacific Championships.

The 400 IM national champion told Hindmarch-Watson after the race that she was due for a best.

Her time puts her eighth in the world rankings.

The battle for second was an exciting one between Marni Oldershaw and Sidney Pickrem. The two were only separated by three tenths of a second at the halfway point, when Oldershaw opened up a lead of over a second over Pickrem in the breaststroke with Pickrem almost closing that gap in the final 50 meters being out touched by six one-hundredths of a second.

18 year old Evan White of the Oakville Aquatic Club demolished the competition in the men’s 200 IM winning the event by almost four seconds finishing in a time of 1:59.84. For 150 meters White was on pace to beat Keith Beavers national record of 1:59.19, but fell just short in the final 50 meters.

The important thing though is he did not fall short of the top 16 selection standard of 1:59.99. White’s time also places him third in the world rankings.

It is shocking to note that White is the first Canadian man to break the two minute mark in the 200 IM since Beavers set the national record in 2008.

Olympic and World Championships silver medalist Ryan Cochrane took the 1500 freestyle with ease finishing 13 seconds ahead of competition. Cochrane posted a time of 15:01.72 which puts him in second place in the world ranks one one-hundredth of a second behind Gero Kis of Hungary.

This race had a very different feel than the 1500 freestyle at the World Championship Trials just over a year ago. In that race Cochrane was chased by teammates Will Brothers and Eric Hedlin. Cochrane finished in a time of 14:59.73 with Brothers posting a 15:02.48 followed by Hedlin who recorded a time of 15:03.64.

On Saturday night in Victoria Brothers once again picked up the silver, but in tonight’s final he posted a 15:15.35 missing the top 16 selection time of 15:13.98.

where does maclean train in the offseason? Still at Georgia I presume? I just looked her up…didn’t realize she made finals at the olympics. Not surprised about her ncaa success and now this! congrats!!

I was wondering the same thing…that last 50 was UGLY…wonder if she went after the 100 split to qualify for their standards?

Definitely not going for the 100, a 1:01 would be way too slow. I imagine she was going for the 200 time (usually her weakest fly race) but was out too hard and gave up.

I saw that race from the bleachers last night. Noemie did NOT just give up. As we used to say, a piano fell on her that last 50 and hit her hard. She looked devastated after that swim. I have no doubt that she gave it her all.

Interesting mens 50. You don’t mention that peddie false started. But watch this video, it’s hard not to hear the child yell go before the start