In addition to selecting its senior teams for the premier international meets of the year, Swimming Canada has selected junior teams for two important development events... 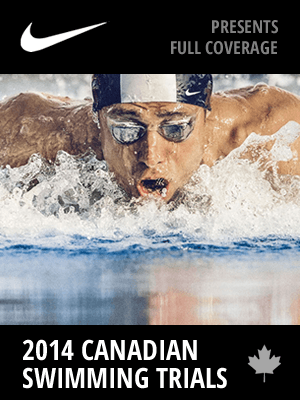 Swimming Canada has selected junior teams for two important development events in addition to selecting its senior teams for the premier international meets of the year.

Canada’s teams for the Junior Pan Pacific Championships in Maui, Hawaii, and the Youth Olympic Games in Nanjing, China, were announced following the conclusion of the Canadian Swimming Trials Saturday in Victoria.

Both events are set for August, with Junior Pan Pacs running Aug. 27-31 while the Youth Olympics stretch from Aug. 17-22.

“We have very strong representation from our 15-to-17-year-old crew. It bodes well for our future because our team is so young,” says National Junior Coach Ken McKinnon.

For the remaining 19 members of the 30-swimmer team, this will be their first top-level junior international meet. A newcomer-heavy team is a “good problem to have,” says McKinnon.

“Our top of the line junior talent have been able to get themselves on the senior team. In one way that weakens our talent pool but it is the goal of the junior program, so that’s a success,” McKinnon said.

The Youth Olympics, meanwhile, will serve another purpose, as Canada will send a team of 15- and 16-year-olds to compete at the 18-and-under event.

This information was provided in a press release from Swimming Canada