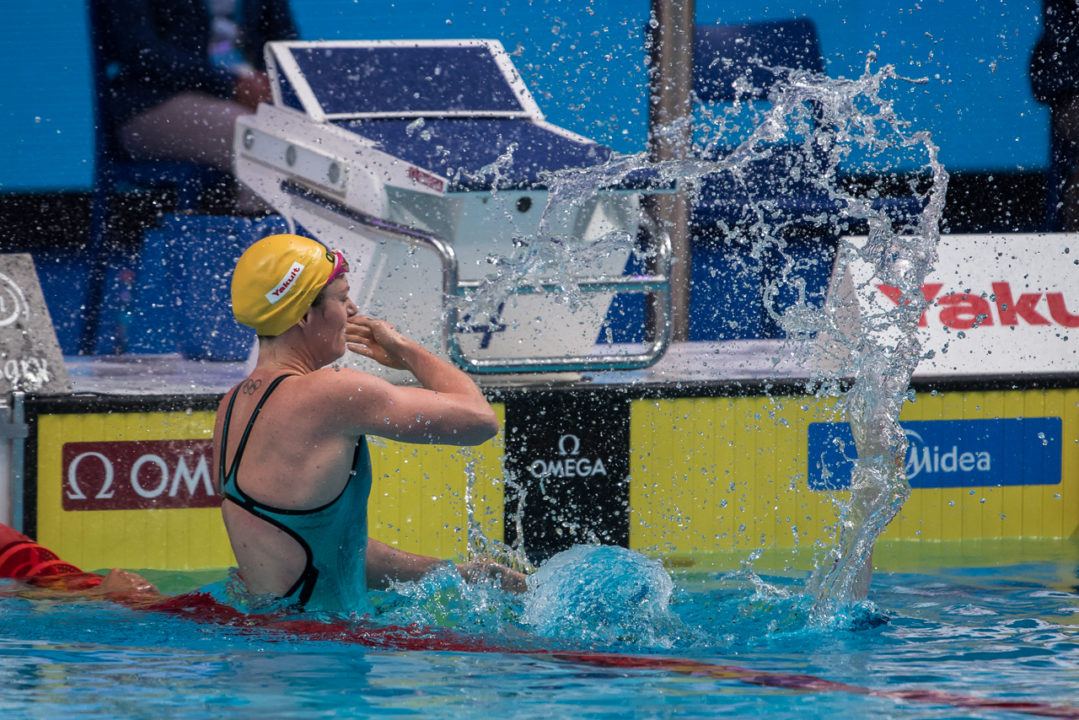 Emily Seebohm fought her way to gold tonight, just like she's fought her way against adversity outside the pool over the past year. Current photo via Peter Sukenik/www.petersukenik.com

Just when it looked as though the nation of Australia could possibly end its aquatic campaign in Budapest without a single gold medal to its credit, reigning world champion Emily Seebohm came to the rescue. After collecting a bronze in the 100 backstroke and clocking a new Commonwealth Record in the 50m back for 4th place already at this meet, Seebohm saved her best for last and crushed a monster time of 2:05.68 to win the 200m backstroke.

For 25-year-old Seebohm, her gritty performance was not only a victory for Australia, but it was also a personal triumph for the national team mainstay who’s had a difficult year. After cruising to the 100m and 200m backstroke titles at 2015 World Championships in Kazan, Seebohm went on an absolute tear across the 2015/16 World Cup season.

By the time Rio rolled around, however, it was clear to the Brisbane Grammar swimmer that something wasn’t right, as she felt tired, crampy and sluggish. Finishing a disappointing 12th in the 200m back and off the podium in the 100m at the 2016 Olympics, Seebohm waited until after the Games to announced she had been suffering from symptoms of and ultimately was diagnosed with endometriosis. She eventually had surgery in December 2016 but refused to blame her lackluster performance in Rio on her health problems.

Giving swim fans perhaps the most emotional performance of her career, Seebohm couldn’t hide her satisfaction in knowing she persevered and never gave up in the race.

“I’m just really honoured and proud, such a fast field tonight and I was going to be proud of myself whether I won or I came last because getting back into the pool after Rio was really hard.

“Everything I’ve gone through it just proves to myself that it wasn’t me, that Rio was just one of those things that happens in life and sometimes you’ve got to go down, to get back up.

“I guess for me it was really hard after Rio, I knew there was a lot going on in my body and I really pushed through in Rio,” Seebohm said.

“After the surgery (for endometriosis) I got my wisdom teeth out in January, and then I had to rush back into the water and train really hard for this and I’m just amazed at what I have achieved tonight.

“I think what I did last year helped a lot, I was very mentally and physically tough last year even though I was struggling a lot it definitely helped me coming into this year, feeling better inside myself, feeling better inside my head and to come into this year and just absolutely enjoy every moment that I’ve had it’s just been a fantastic meet.”

In many ways, Seebohm’s race strategy tonight in Budapest was representative of her personal journey, maintaining her composure through the 150m mark and charging to the finish with pure guts and fueled by the sheer will to win.

Said Seebohm after the race regarding her strategy, “I knew that Kathleen Baker was going to take it out pretty hard, because that’s her style.

“I know that people have seen me race the 200 backstroke like this many times before so for them, I think it was about trying to take it out hard because they think that will hurt me more in the back-end.

“But it is all about focusing on your own race and you don’t get carried away with focusing on what people are doing around you, because at the end of the day, the perfect race plan for yourself works best and I stuck to what I know and what I’m good at and it worked out really well for me tonight.”

Even young 16-year-old Taylor McKeown, who earned a new World Junior Record in the event representing Australia, was in awe of her teammate’s electric performance.

“I think I was more happy with her swim than mine to be honest, it was good to see her get out there and claim the world title again.”

Well done Emma. Your story should be an inspiration to others how the tough get going. Have expressed it several times concern about where SAL and the team have been at you at least have shown how to keep fighting through many issues over your time on the team.
Hopefully some others will be inspired to look back and step up to the plate.

sorry about that i put Em and it went to Emma not Emily. Trust technology not the idiot on the keyboard. Apologies

Small error, the other AUS swimmer was Kaylee McKeown rather than her sister Taykor (the breaststroker)

I trained with seebohm a couple years in the buildup to london. Setting aside the fact she is a genuinely great person she is also the best/hardest trainer i have been around, and i have trained with many other elite men and women.

Could not be happier for her, i just hope she gets the job done in Tokyo!

Good personal redemption for Seebohm. She had been ranked #1 in the world for many years, but failed to win at last 2 Olympics. It was moving watching her press conference in London. Now she gets to be hero, good on her.

no doubt the best story of these worlds

I’m sorry.. I can’t hear you over the ka-ching sounds my million dollars make!

Had geniuine tears in my eyes when I saw that swim. Hard to believe she’s been on the team for 10 years now.