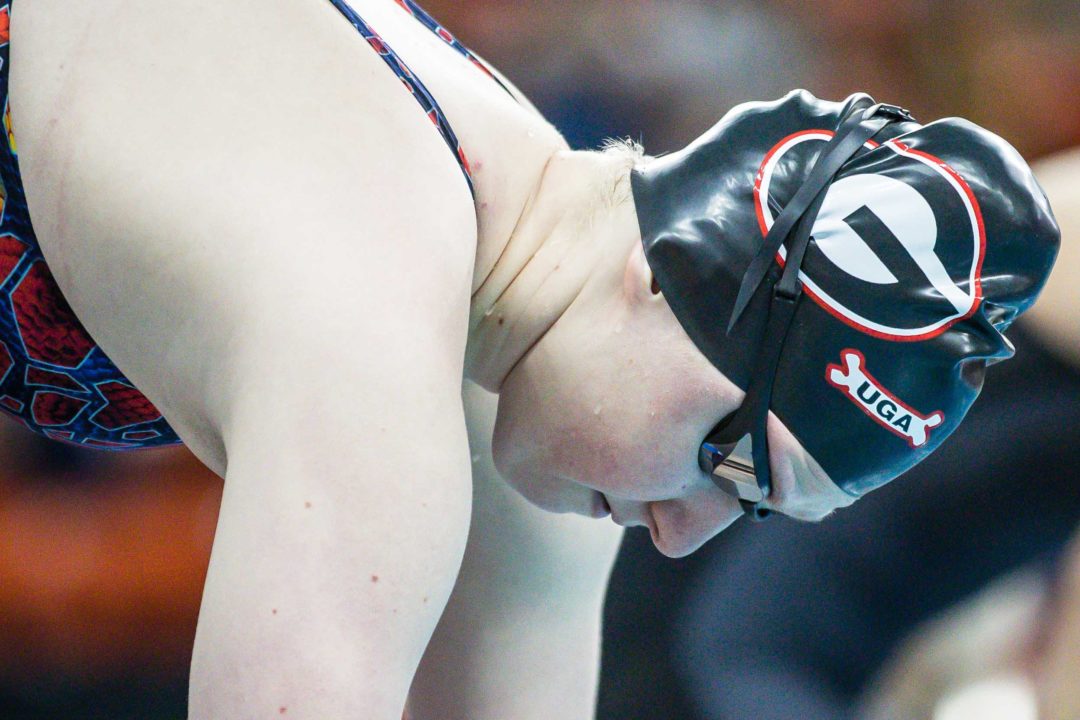 SEC Freshman Swimmer of the Year Olivia Carter has added her name to the NCAA transfer database, signaling her intention to leave the University of Georgia. Current photo via Jack Spitser/Spitser Photography

2019 SEC Female Freshman Swimmer of the Year Olivia Carter has added her name to the NCAA transfer database, signaling her intention to leave the University of Georgia. Carter, a native of Greensboro, North Carolina, is the 3rd-fastest 200 butterflier and 6th-fastest 100 butterflier in Georgia history.

Carter’s declaration to leave Georgia comes on the same day as another major shakeup in Athens as long-term associate head coach Harvey Humphries just announced his decision to retire after 40 years connected to Bulldog swimming.

At the 2019 World University Games in July, Carter placed 2nd in the 200 butterfly in 2:09.56, behind victor and fellow Georgia Bulldog Dakota Luther.

Carter told SwimSwam that she would be taking an Olympic Redshirt to train with her club swim team, Enfinity Aquatics in North Carolina. Her appearance in the database, however, means that she is transferring and not simply taking a year away from the NCAA. From Carter:

“I am taking an Olympic redshirt this year and staying home to train with Enfinity (my club team). I am so grateful to all the Georgia coaches, staff and team for everything they’ve helped me accomplish this year.”

The University of Georgia women finished 18th at NCAAs last year with a total of 66 points, 17 of which were scored by Carter individually.

I wonder if there would be fewer transfers if athletes could stay longer on their visits so that they could see more practices and get to know the team and coaches better as well as how the team practices?

No. The only way transfer mighty be reduced is to move back the coach contacts/OV dates. Asking a 15/16 yo to make such a huge decision is so hard.

Some of these OV’s are so early in the school year too… it’s really hard to get a proper gauge of what the school or training is like during the first month of school with a freshman host. I have friends who have transferred out after a semester (multiple different d1 schools), even after being committed for a year plus, because the team culture and practice style was very different in season from what they were sold on their official visits. IMO it would be really interesting to get data on how long athletes were committed, when their OV was and what their reasons for transfer were to see if there’s a correlated basis in fact for so many transfers.

On the flip side, asking college students to host recruits in season is unfair. Giving up your bed for two nights when you have a meet coming up sorta sucks.

Didn’t realize Georgia placed so low at NCAA’s last year… Used to them being top ten for sure, top five for quite a few years. Wonder if she’ll redshirt and train for trials or try and jump straight into another college program?

I hear NCstate is beautiful this during the school year

We work with Olivia and her parents and she is transferring, but taking an Olympic redshirt year.

College Station is a nice place to swim! gig-em!

She will be missed at UGA but we wish her all the best- great girl!

Best of luck to Olivia.