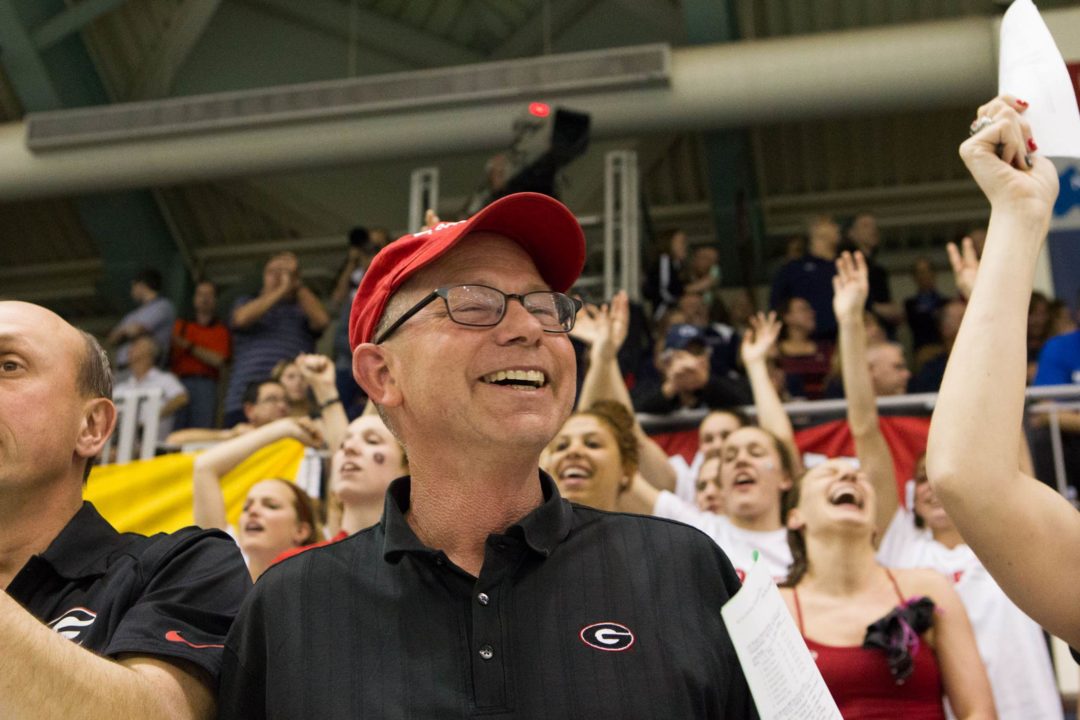 Caldwell was a four-time national meet qualifier as a swimmer at Idaho from 2005-09, and spent six years as a swim coach at Caldwell High School.

University of Georgia associate head coach Harvey Humphries announced his retirement today after more than 40 years connected to the program.

Humphries has been a fixture for the Bulldogs coaching staff since the 1980s. Before that, he was a swimmer for the University from 1975 to 1979, and jumped right into the coaching ranks as a graduate assistant after that. Humphries joined the full-time coaching staff for the 1982-1983 season, and was named associate head coach in 2012.

With Humphries on staff, Georgia won 7 NCAA team titles. Perhaps most memorable was the 2013-2014 season, when Humphries mostly headed up the program and won a national title as head coach Jack Bauerle was held out during an investigation.

The Georgia press release specifically says that Humphries is retiring from collegiate coaching, suggesting that he may continue in his role as head coach of Athens Bulldog Swim Club, the school’s companion club. Georgia also has a sizable contingent of professional swimmers training with Athens Bulldog.

The full UGA release is below:

Harvey Humphries, who has been a fixture in the Georgia swimming and diving program for parts of five decades, announced this week that he will be retiring from collegiate coaching, effective at the end of the month.“I have always told our student-athletes, ‘Look at the big picture. It’s never about one person,'” Humphries said. “I am flooded with emotions right now, but when I look at the big picture, I’m not sad. I am proud of everything that we have accomplished as a program. And while this is hard to do, I’m confident it is the right time for me to step aside. It gives the program room to grow. We have a great coaching staff, and I know that things are only going to get better and better. I’m excited about what the future holds for all of us.”Humphries was a swimmer for Georgia during the 1975-76 through 1978-79 seasons, worked as a graduate assistant coach in 1979-80 and 1981-82, and then became a full-time assistant at the start of the 1982-83 campaign. He has been serving as Georgia’s Associate Head Coach since 2012.“The positive impact Harvey has made on our program is immeasurable,” said Jack Bauerle, Georgia’s Tom Cousins Swimming and Diving Head Coach, who hired Humphries. “No amount of words can do it justice. He is an incredible human being. He is Georgia swimming. His loyalty to this school and to our program is unmatched. It has been my privilege to be on the deck with him, not just as cohorts but as great friends. We have had an amazing amount of good times together. He cares so much about the student-athletes, and that’s the greatest measure of any coach.”With Humphries as Bauerle’s right-hand man, Georgia has claimed seven team national championships, 12 Southeastern Conference team titles, 99 individual and relay national crowns, three NCAA Woman of the Year winners, and 39 NCAA Postgraduate Scholarship recipients. Georgia swimmers and divers are recognized on the collegiate, national, and international stages.Humphries has impacted the program in a variety of ways, perhaps none more significantly than distance events and recruiting. Under Humphries’ tutelage, Georgia swimmers have earned 22 NCAA and 59 SEC titles in the 500- and 1,650-yard freestyle and the 400-yard individual medley.Humphries has served since 1981 as head coach of the Athens Bulldog Swim Club (ABSC) which has developed some of the top talent in the Southeast and can boast Olympic, Paralympic, NCAA, and SEC champions. Humphries received the first Schluetter Award, given to top national age-group coaches, in 2011. Humphries was inducted into the Arkansas Swimming Hall of Fame in 2003 and was chosen as Established Assistant Coach of the Year in 2016.Humphries graduated from Georgia in 1980 with a degree in Microbiology. He and his wife Wendy have two children, a son Billy and a daughter Pirie.

A great man and coach. Congratulations on an amazing career Harvey!

One look no further than his son Billy to see he has made it in the world. He’s a world renowned coach, a world renowned Dad, and a great role model for coaches everywhere. A rock like no other.

Congratulations Harvey, enjoy a well deserved retirement! Definitely one of the hardest working, and most successful as a result, guys in the profession.

Harvey is one of the good guys. Hate to see this news, but I wish him all the best. #Tater

Congrats Harv! The love and care for your swimmers you showed them every day set an exceptional example for so many young coaches. Thank you for all your help over the years!

Amazing coach and even better person. You inspired so many of us during our time on the Team and truly helped so many accomplish dreams. You’ll be missed Harv!

What a fantastic individual! Congrats and Thank you Coach.