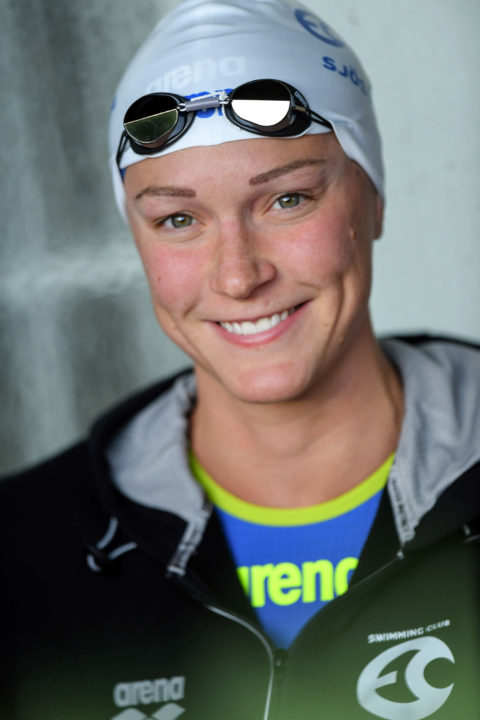 Sarah Sjostrom talks to us about her life and training in Sweden, the ISL, her reaction to the Olympic postponement and plans for after Tokyo 2021 Archive photo via Gian Mattia D'Alberto / LaPresse

Despite the ongoing coronavirus pandemic, Swedish superstar Sarah Sjostrom has been able to continue her training relatively normally. Currently based at the Swedish National Training Centre in Stockholm alongside head coach Johan Wallberg, Sjostrom is counting herself lucky.

“The restrictions have not been too bad in Sweden. I’m very happy that I’ve been able to continue all the work in the pool and stick to my routines. I can imagine it’s really hard and difficult for all the athletes around the world who have not been able to do their normal routines”.

Sjostrom returned to Sweden at the end of March after her international training group, Energy Standard, was forced to disperse because of travel bans being introduced in Turkey.

The country has taken a much different approach to the pandemic than the rest of the world. Although it is not without restrictions entirely – secondary schools and museums are closed, sports fixtures are cancelled and gatherings of more than 50 are banned – life has been allowed continue relatively normally. For Sjostrom, that means she is one of a small group of international swimmers which have been in the water since the beginning of the ‘lockdown’.

When asked about returning to Turkey to train with her international team, Energy Standard, she said “First of all we have to deal with the virus somehow and everyone needs to be safe if they’re going to travel. I’m just trying to take it one day at a time. I would love to go because I really enjoy working there. It’s a great environment to train in”.

Like every other Olympic athlete, Sjostrom has had to readjust her training and refocuse for what will now be a 2021 Games. She has been pre-selected for Sweden’s Olympic team and says the decision to postpone the Games was “expected” due to so many international competitions being cancelled in the weeks previous.

“It’s hard because all my training has been focused to be at my best in July but that has had to change. No one knows how to change their programmes because this is a new situation for everyone around me; my team, my club, my coach”, she said.

However, Sjostrom has found some positives in what has been such a dire time for international sport. “My way to handle it was just trying to think that maybe it’s good for me to have a bit of rest because I’ve been competing and travelling the world for the last 8-10 years at a very high level. Maybe it’s good to just relax now and not be travelling everywhere all the time and living out of a suitcase”.

One adaptation that the Swedish National Team have made is holding their own in-house meets to give the swimmers a chance to race. They held their first one at the beginning of April, which Sjostrom says went well given they were stand-up swims in training. The centre is planning to hold another one at the beginning of June. We also reported yesterday that Swedish Swimming Federation will hold a virtual national championships from June 25th-28th.

Sjostrom expressed how the introduction of the International Swimming League last year has made the sport more exciting. Their hope is to hold a training camp/competition in October later this year, which they have called the ‘ISL Solidarity Programme’.

Because of the uncertainty the coronavirus pandemic has caused, Sjostrom said of the ISL that “It’s very hard to make a plan and say these are the exact dates that we’re going to use. The competition might be in October but we don’t know yet”.

Sjostrom has expressed how she hopes to be a swimmer for “many, many years to come”, but noted how she doesn’t “count her swimming career in how many Olympics” she does. “I really enjoy being an athlete, I think it’s a ‘luxury life’ to be working with something you are a good at. It’s a really exciting time to be a professional swimmer”.

The World Record holder and Olympic gold medallist emphasised that amidst the uncertainty, she is looking forward to racing again, whenever that may be.