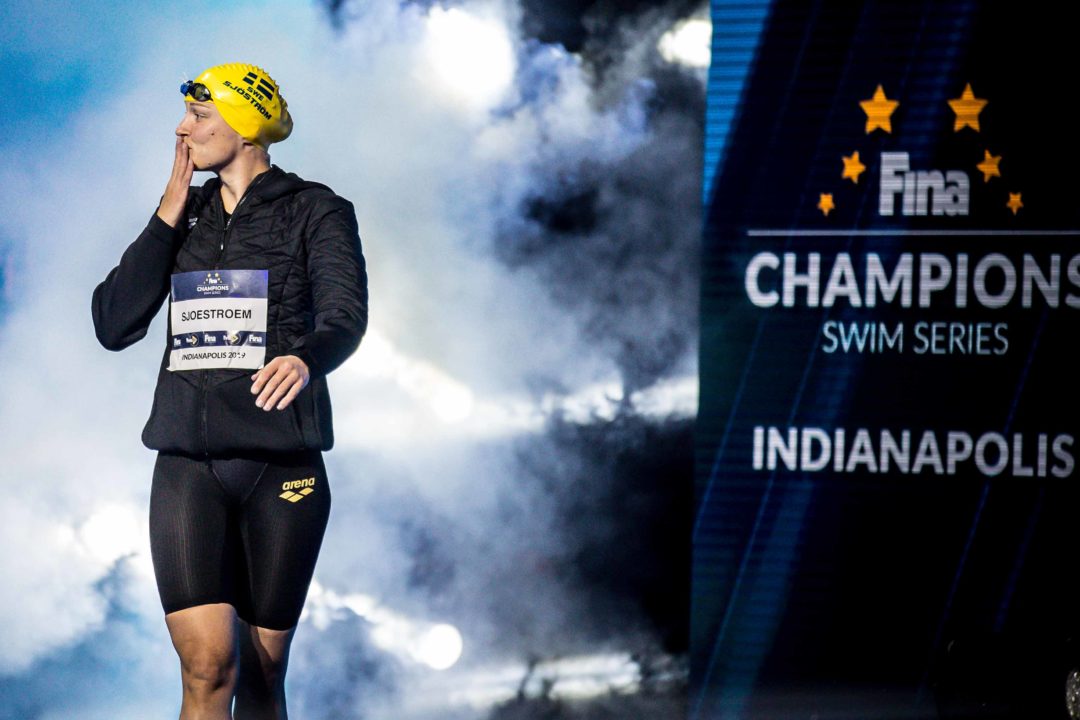 The Swedish government has taken a less-draconian approach to the coronavirus response, which includes allowing its elite athletes to continue training. Archive photo via Jack Spitser/Spitser Photography

The Swedish National Training Center will hold a closed time trial event on Friday and Saturday for its top athletes.

Jokingly being referred to as the “Stockholm Closed,” juxtaposed to the “Stockholm Open” meet that was scheduled for April before the coronavirus pandemic led to cancellation of essentially every swim meet on earth over the next 6 weeks.

Unlike most of the world, Sweden has, generally, remained open for business, albeit with some local variations. The government so far has only barred gatherings of over 500 people. Primary schools remain open, borders are only partially closed, and there have been no widespread quarantine orders or shutdowns of public places, though guidelines have been offered to move meetings to digital platforms when possible.

Many swimmers are planning to be in a semi-tapered state for this weekend’s racing, so there should be some fast times on the board. Among the swimmers expected to participate are World Record holder and Olympic gold medalist Sarah Sjostrom, Michelle Coleman, and Cal commit Björn Seeliger.

While the Olympics were officially postponed until 2021 on Tuesday morning by the International Olympic Committee, swimmers are still able to train at the National Training Center because of the country’s relatively less-draconian approach.

Sweden has 2,554 confirmed cases of the coronavirus with 62 confirmed deaths from COVID-19 complications.

A good place to learn more would be clicking the link above that reads “Read more about why Sweden is approaching the pandemic differently from Foreign Policy here.”

do people still use that word?

I’m really interested in seeing how well Sweden’s policy ages. At face value, it seems naive, uninformed, and (perhaps) a bit arrogant, but I could be wrong. Only time will tell.

I’m interested too. Not in a judgemental way, as many seem to be (it feels like some are rooting for it to fail), but in an understanding way. Sweden so far has fewer confirmed cases of coronavirus than their neighbors but more confirmed deaths. Both countries have far lower numbers than, say, Belgium, which has a similar population. Austria, with a smaller population, has far more cases, but a similar number of deaths as Sweden. The unfortunate part is that any conclusions that anybody can draw about this virus is based on the validity of testing, which so far has been wildly inconsistent around the country. It’s worth reading the article linked above about why Sweden is taking the approach… Read more »

As a Swede I try to be updated and it is not easy. The same strategy (avoiding contact) could have different tactics in different nations. For example Japanese don’t need to avoid handshakes because they are bowing.

Sweden is not dense 10 mil in the area of 1,2 California, we have the highest amount of single households in the EU, the reach of public media is vast. 30-40% of the adult population watch the daily press conference from the authorities.

May be some of the clues

Reading the article is very enlightening (thanks for the link) – definitely good to see the whole picture and the outcome – and get a balance analysis. It is easy to pick just the good (or bad).

I agree – actions of individuals in this type of scenario highly affect the outcome. I have heard other places which are doing okay where people started social distancing and high level of hygiene because they remember previous outbreak but not trusting the government.

So I think keeping distance and hygiene really is the 150-year-old method that still work for contagious disease, no matter which direction you are coming from.

Basically Swedes are not very social from the beginning. Govt ramped up precautions today though recommending 50+ ppl events not to be held.

Some good times were swum though

Fact check: Sweden has fewer confirmed cases than one of its neighbors (Norway). Finland, which it shares a land border with, has far fewer numbers, and Denmark which is connected by bridge is also lower.

Maybe they want to thin the herd a bit

Upon reflection, my comment did not sound very sensitive. I want to clarify that I am in no way rooting for Sweden to “lose.” (I’m married to a Swede BTW). I want Sweden and all other countries to mitigate and eventually eradicate this terrible pandemic.

I am interested in the public policy aspects of their decisions, as the policies do not seem (to me) to reflect the gravity of the situation. In fast, they remind me of many of the initial policies of U.S. states, and these policies did not work at containing COVID-19 or flattening the curve. Maybe Sweden will adapt stricter policies, or maybe their current policies will prove to be effective.

I wasn’t up to date on Sweden, in fact I was misinformed by my Swedish friends who are terrified of the virus. They probably have no idea about the rest of the World

News like that makes me lose faith in humanity, that seems nothing but selfish.
When are we going to understand there’s a potentially life threatening virus out there and even those without symptoms can carry it towards those more susceptible to the disease?!

Stay home people!! The sooner we all stay home and flatten the curve, the sooner we can go back to our normal lives.

If your country took a different approach that didn’t involve everyone staying indoors would you my hero still stay locked up in your house? By this logic people should feel obligated to stay home all of the time since there is possible a chance you could be spreading the flu which could potentially kill someone.

So much for being an open and democratic society … Do not bother informing the citizens about the estimated consequences of the current policy. No wonder there is a strong scepticism towards its politicians over there.

They released models for calculating health care capacity need last week. As a Swede, I have a lot of faith in our government and their way of handling the crisis. And a lot of people are staying home anyway, working from home etc. A poll a couple of days ago showed most people trust the policies and strategies.