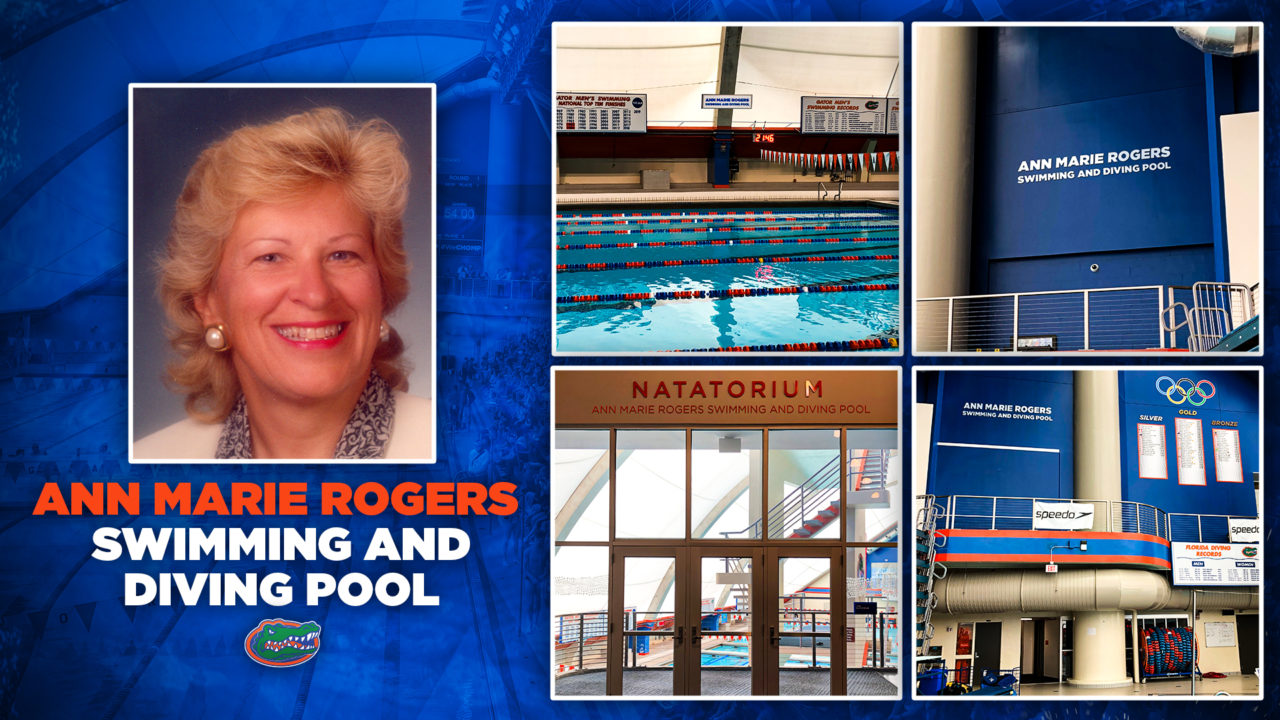 Rogers served as the school's associate athletics director from 1985-2003 and is regarded as a "trailblazer" for women’s athletics. Current photo via Florida Athletics

SwimSwam Pulse: 81% Would Rather Have Olympic Gold Over World Record

A vast majority of SwimSwam voters said they’d rather have an Olympic gold medal than a world record in the most-voted SwimSwam poll in history.

The University of Florida’s home O’Connell Center Pool is being renamed the Anne Marie Rogers Swimming and Diving Pool after a $1 million gift to Florida athletics from swimming alum Veronica Meinhard and her wife Kristina M. Johnson.

Rogers, who served as the school’s associate athletics director from 1985-2003, is regarded as a “trailblazer” for UF’s women’s athletic programs, according to the school’s announcement.

“Ann Marie fought the early battles during the rollout of Title IX to give women opportunities that did not exist before,” Meinhard said. “In the process, she opened the doors for people like me and Kristina because of the important work she did throughout her career.”

“It’s brought lots of tears of joy,” Rogers said of the honor. “I’ve been retired for quite a long time and I never expected something like this.”

Rogers was involved with various organizations at a national and conference level throughout her career, serving as a member of the NCAA Professional Sports Liaison Committee, NCAA Golf and Recruiting Committees, National Association of Collegiate Women Athletic Administrators and SEC Executive Committee among multiple others.

Prior to Florida, Rogers became the first director of eight women’s sport teams at Alabama under Bear Bryant (1974-1985) and worked as a Women’s Sports Consultant (1981-82) at the SEC, spearheading the addition of women’s sports into the conference and creating policies and procedures for nine women’s SEC Championships. Rogers was also the Princeton University’s Women’s Tennis Coach (1972-73); a Smith College Physical Education Faculty Member; and in Michigan, she was a Dearborn High School teacher and coach (1969-73).

Meinhard was a four-time All-American on the women’s swimming and diving team from 1988-92, and Johnson is the 13th Chancellor of the State University of New York (SUNY).

A well deserved honor.. So glad to see women getting their due recognition and specifically Ann Marie Rogers. Kudos to UF as well for naming a facility to honor her wife also.

If you ever want to feel humbled, check out the bios of these three women.

I did earlier and wow! Impressive women!

Kind gesture and nice way to honor someone who was influential to them.