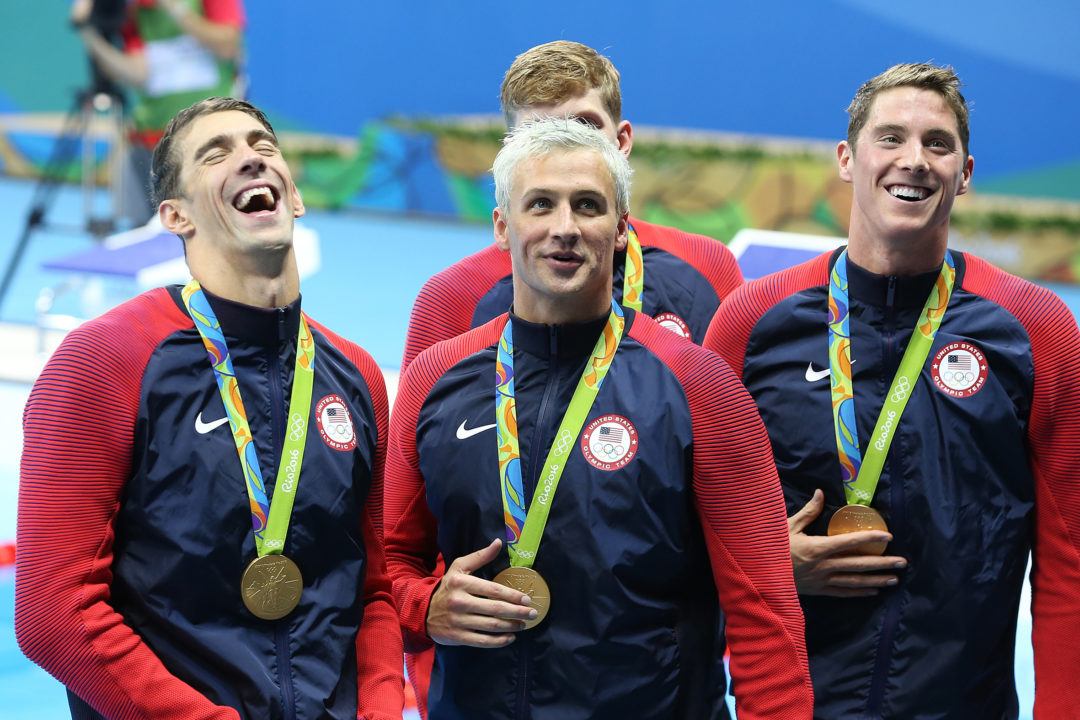 Now that he's finished his races at the 2016 Rio Olympic Games, Team USA's Ryan Lochte sat down with the press to talk about his 200 IM race, and the possibility of training with his former Florida teammate Conor Dwyer after Rio. Current photo via Simone Castrovillari

Now that he’s finished his races at the 2016 Rio Olympic Games, Team USA’s Ryan Lochte sat down with the press to talk about his 200 IM race, and the possibility of training with his former Florida teammate Conor Dwyer if he makes a return to the pool.

In last night’s 200 IM final, a highly anticipated race between Lochte, Michael Phelps, and Japan’s Kosuke Hagino, he wound up missing the podium with a surprising 5th place finish. Things were going well for Lochte heading to the final, but he lost steam in the back half of the race.

“Going into that race I felt amazing. That whole day, at warm up, in the ready race, that first half of the race, I felt great. Something happened during that transition between back and breaststroke, it felt like someone jumped on my back and I was carrying multiple people. I don’t know what happened, it just fell apart. But you win some, you lose some. I can’t dwell on it. It happened, it’s in the past.”

When asked about his future in the sport, Lochte made it clear that he’s not done yet, and still has goals that he wants to accomplish in the pool. He doesn’t have a timeline on his comeback in mind, but he thinks he’ll be better than ever after taking a break.

“For years now I have been wanting a break but I was scared to take it because I wanted to come to 2016. I didn’t want to fall short of coming and not making the team.”

Lochte has announced his intentions to take a break from the sport, but he’s left the door open for his return. He’ll be moving to California when he returns to the United States, and has talked about wanting to train there in the past.

“I know a (former Florida) swimmer, Conor Dwyer, that I am good friends with, I will want to train with him. Depending on where he ends up that will be a good move for me. He is one of the hardest trainers I have ever seen and trained with. Training with him will be definitely fun, I just don’t know where.

“I can see me going to the west coast and training at Cal (University of California) or at USC (University of Southern California), I am kind of up for anything but I will make that decision after I am done recovering.”

Lochte and Dwyer were teammates on the men’s 4×200 free relay that won gold in Rio.

Lochte should part with international swimming and i think he has no chance to get back in the team as USA has such number of talented swimmers to replace Lochte….

Rumors swirling of Dwyer to ASU especially after his stint at altitude with Bowman….. Lochte & Dwyer being coached and led by Phelps & Bowman???! Now that would be something to behold.

I know Conor spent some time training at NBAC with Bob before, and he didn’t stick around, so I’m not sure if it just wasn’t for him or if they planned on it being temporary.

That would be like Rocky training with Apollo Creed! EPIC