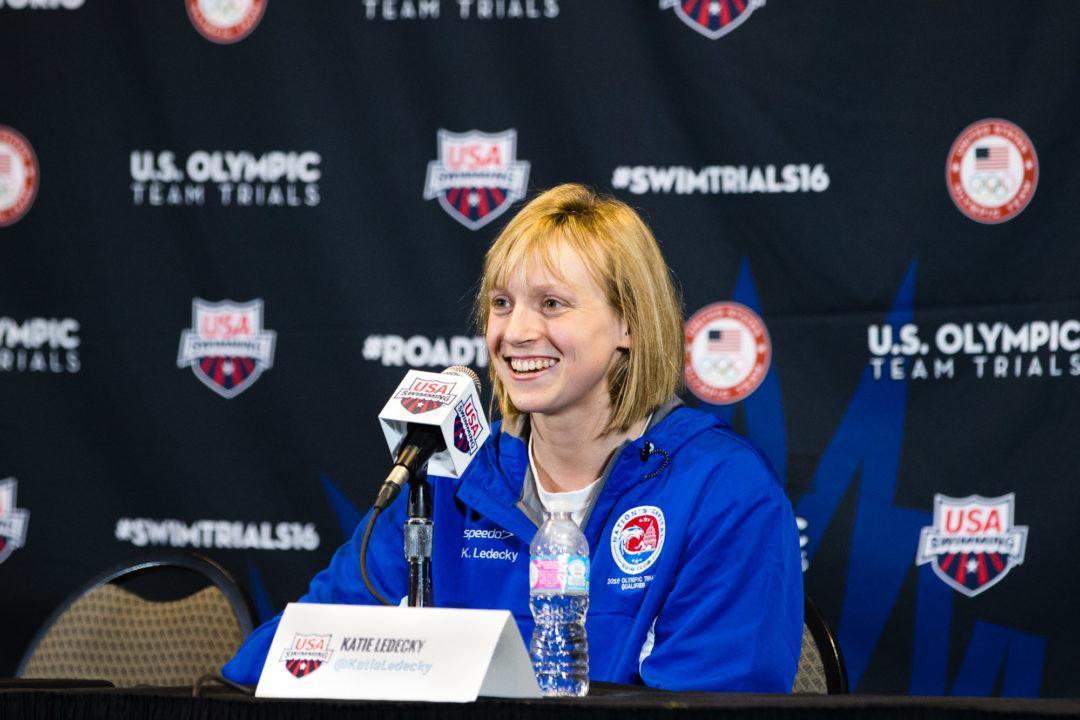 If swimming had its own State of the Union Address, how would we rate the level of sportsmanship post-Rio 2016? Current photo via Tim Binning/TheSwimPictures.com

About halfway through televised coverage of the swimming events at this summer’s Olympics in Rio, I had lunch with a friend. This friend is a former NCAA Division I swimmer, who has knowledge about, and personal experience with, many different levels of the competitive world of swimming. She confessed that she had stopped watching the Olympic swimming coverage altogether because of the lack of sportsmanship. She then asked me if I had noticed it too, and admittedly, there were several moments during the Rio Olympic Games were I felt that our nation’s swimmers had missed opportunities to positively represent the sport and the United States.

I have gone back and forth over whether to write this article because of its potentially divisive nature (and I should explicitly state that this is purely an opinion piece), but I think any discussion about sportsmanship will only have a positive impact by bringing more awareness to the subject. Notably, this article defines sportsmanship as an athlete’s display of gratitude, humility and respect for what he or she is doing and the people he or she is doing it with.

Taking a step back, I firmly believe that sportsmanship plays a uniquely important role in swimming. To show good sportsmanship and be a positive reflection of your team is one of the first lessons I recall learning from swimming. Like many swimmers, I first began competing for a summer league swim team where I was taught that after every finished race, you shook the hands of the those swimming in adjacent lanes and told them, “Good swim.” This display of respect was not contingent upon who you were swimming against, what time you went in the race or what kind of mood you woke up in that morning.

Swimming is about molding yourself into a better person, and how you treat your teammates and competitors is an integral part of that transformation. Sometimes it requires giving credit where credit is due, and other times, silence can speak volumes about one’s integrity.

I have never heard booing at a swim meet, and one of the few times I remember ever being reprimanded by my club swim coach was because I wasn’t wearing a team swim cap at practice during a summer training trip. I can’t recall if I was ever told outright, but I at least implicitly understood that the time on the scoreboard was the final arbiter. Water slaps and victory screams were rendered unnecessary by the clock. I was also taught that putting up points for my team was the primary objective, and that any victory by a teammate should be genuinely celebrated as if it was my own.

As a big supporter of United States Swimming, here are a few of the moments that disappointed me in terms of sportsmanship at this summer’s Olympic Games:

I first began to question whether sportsmanship was on the decline after watching televised coverage of the 2016 NCAA Swimming and Diving Championships. I was concerned by Lilly King‘s post-race interview after winning her second individual breaststroke title in the 200 yard distance, where she failed to contribute any of her success to her team. I also raised an eyebrow over the post-race interactions between Cal teammates Jacob Pebley and Ryan Murphy after the 200 yard backstroke finals and Texas teammates Jack Conger and Schooling after the 200 yard butterfly finals. I saw no footage of congratulatory handshakes, hugs or even smiles directed at one another. Although, it is certainly plausible that such footage was edited out, I would expect that after three years of training together in a close environment, one would be quick to a celebrate a teammate’s victory or runner-up finish. At multiple times throughout the NCAA meet, individual success seemed to take precedence over team success, which is the anti-mission of collegiate athletics.

Instead, a good example of what I expect to see among collegiate athletes is Chase Kalisz‘s reaction to Georgia teammate Jay Litherland‘s qualification in the 400 IM at Olympic Trials. Kalisz genuinely seemed happier over Litherland’s Olympic qualification than his own.

As the sport of swimming grows in popularity, are its top athletes doomed to become the self-absorbed egomaniacs that plague other national organizations like the National Football League (NFL) and National Basketball Association (NBA)?

In spite of the moments of poor displays of sportsmanship at this year’s Olympics, or maybe only a failure to go out of one’s way to display good sportsmanship, there were far many more positive takeaways for Olympic swimmers on Team USA. They bonded in the car singing karaoke. One (Ryan Held) was overcome with emotion realizing he had helped his nation win a gold medal. Another (Missy Franklin) continued to smile and support the team, even when her own Olympic dream was not going as planned. Still another (Maya DiRado) won an unexpected individual gold, but says her greatest Olympic memory is “[j]ust getting to be on a relay with three other swimmers whom I love and admire . . . .” And last but not least, a 19-year-old with five gold medals and three world records, who has been referred to as “the greatest athlete on the planet” (Katie Ledecky), has developed a reputation of “friendliness, calm and modesty.” She has already forfeited millions of dollars in order to enjoy a true college experience with a new set of teammates.

If we continue to insist on good sportsmanship at the grassroots level (i.e. summer league), perhaps swimmers will remain humble at the collegiate and international level. What’s more, perhaps this ingrained humility is what has enabled United States Swimming to be the world’s most successful swimming program in history.

You achieved your goal and got people thinking and talking about sportsmanship. So, a win, I guess?

You did make me think back to one swimmer. He had my number. As kids in summer league, as teens, and then the one time I swam against him in college. Beat me like a drum, over and over. And was the most gracious, humble, and nicest guy ever – I never could get PO’d at him after a race cause he was the most sincere sportsmen I knew. I still remember that, 30 years later. I hope he’s had a good life. Sportsmanship still has a place in competition.

I disagree with most of Mr. Noblitt’s article, but I do appreciate his taking the time to write it and raise the issue of sportsmanship.

One of my favorite acts of sportsmanship came after the award ceremony for (I believe) the Men’s 4×100 relay. The US team had made up a sign that said “Thanks Rio” and paraded it around the deck to show fans (and organizers) their appreciation for helping to make the event a success.

As for Phelps being pumped up after winning the 200 fly. Of course he was. He had every right to be. It’s part of the narrative going back to his defeat in that event in 2012, his DUI in 2014, his verbal… Read more »

not everybody is bubbly and happy and overly supportive like Missy and that’s OK.

this article is like the opposite of the article from yesterday from the guest writer, talking about the killer mindset. (I liked that article)

talk about sportsmanship being dead? doesn’t mention phelps holding hands with le clos and cesh as a second place tie. yeah 2 of the most heated individuals in the past 2 Olympics in a rivalry, holding hands. its not dead.

And conger has been known to be a little sour directly after a race, see 200 fly at NCAA, he wasn’t stoked about schooling beating him. and I wouldn’t be either. I’d be happy later for him but literally 2 seconds after touching the wall, and losing in something you’ve trained for your whole life. don’t expect met to be happy you won and not me.

I agree with the overall premise that sportsmanship is one thing swimming holds over other sports and that we should ensure remains within the sport.

I disagree with many of the individual points, some of which I find to be critical to excess.

I think the “classic” model of sportsmanship is on the decline. But I think it’s because the classic model of sportsmanship was kind of phony and insincere in the first place. Phelps and Le Clos hated each other before they dove in for the 200 fly. You think it makes a difference if Phelps politely shakes Le Clos’ hand afterwords and tells him “good job” (even though by everyone’s standards, that was not a “good job”)?

Athletes are going to keep evolving in the direction of more authentic human emotions. That’s a fight you’re not going to win. And I don’t think it’s a bad thing. Mark Spitz was gracious in victory and by most standards a good sportsman.… Read more »

14
-3
Reply
anonymoose
Reply to  Swimmer A

i wouldnt say they hate each other. lochte and phelps said very often how intense their rivalry is in the pool while out of it they are close buddys.
now of course its probably not been the same with phelps and le clos and others but im sure not every swimmer necessarilly hates their opponents, thats just unrealistic bc that means they’d have to be real sad human beings.

we havent changed as people but the people are not all the same, and one can always only speak for themselves.
maybe you just imagine how you yourself would feel about opponents if you’d be a worldclass swimmer?

Oh no! The swimmers were showing emotion and not being fake!!!!