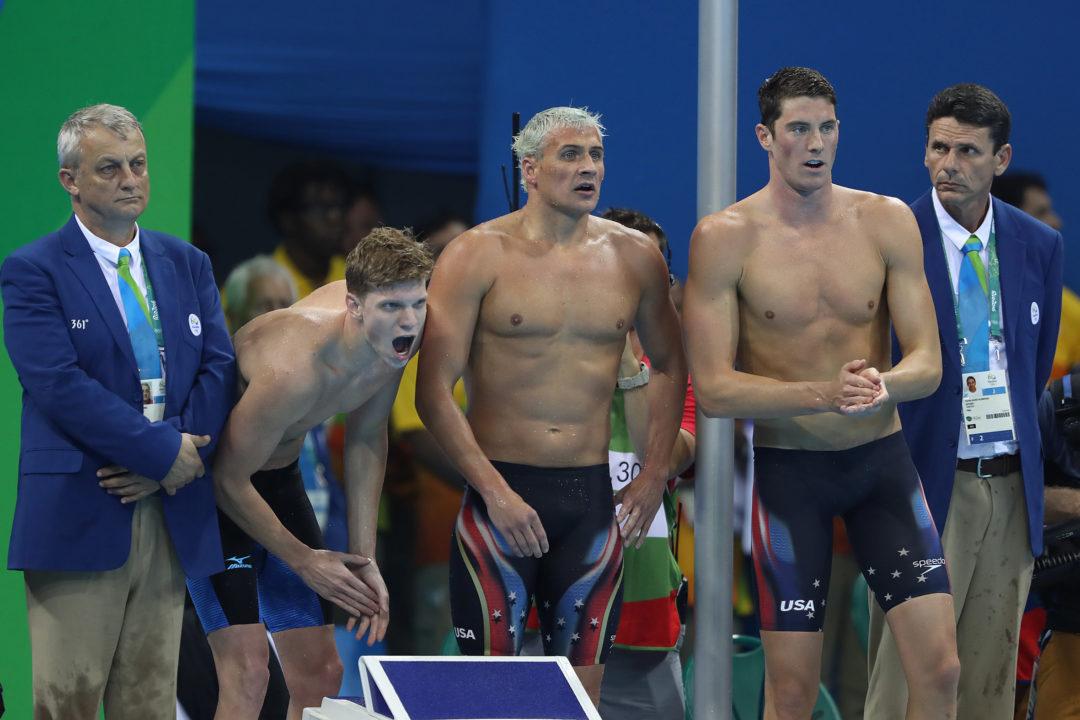 Team USA ran away with their fourth straight 4×200 freestyle relay gold medal tonight.  Here’s a breakdown of how it happened:

An easy win (predictably) for Team USA–it helps when you have three of the five fastest splits in the event.  The front half of the relay was as good as you could ask for; Conor Dwyer was right on his personal best, and Townley Haas turned in the fastest split in the entire field (an incredible 1:44.14).  By the time Haas was done, the lead was stretched to two full seconds, with two of the world’s greatest swimmers about to hit the water.

There were some major grumblings around the absence of Jack Conger in the final; Michael Phelps was added to the final relay, despite not swimming the 200 freestyle at Olympic Trials.  In addition, Conger actually out-split Ryan Lochte in prelims, but Lochte played it very safe on the start and didn’t have any competition as the preliminary anchor leg.  After his 47.12 split in the 4×100 freestyle relay, there’s no question Michael Phelps belonged on this relay, and he backed it up.  Even after the 200 fly final, Phelps split a half-second faster than Conger or Ryan Lochte did in prelims.  However, even without the hindsight of tonight’s splits, there’s arguments that Conger should have gotten the nod over Lochte, who was just a 1:46.03.

A silver was as good as it was going to get for the British; with Team USA bringing their ‘A’ squad, retaining the championship belt from Kazan was unlikely.  Britain has really rebounded from a poor showing at their Olympic Trials.  Stephen Milne was near his best leading off (1:46.97), Dan Wallace held strong in the third spot relative to his flat start best of 1:47.04, and James Guy did what was necessary to secure a silver medal.

The true difference maker, though, was Duncan Scott, who continued his career meet with a 1:45.05 split, which is more than two seconds faster than his best ever flat start of 1:47.28.  Scott nabbed a spot in the 100 freestyle final tomorrow, and has to have incredible momentum and confidence after his relay swim tonight.

A pleasant surprise for the Japanese, who haven’t medaled in this event since they hosted the games in 1964, and hasn’t been a factor at Worlds in recent memory.  Kosuke Hagino was–unsurprisingly–consistently excellent leading off, but Yuki Kobori was the story, with a 1:45.71 third leg that was nearly 1.5 seconds under his best flat start time.  Naito Ehara and Takeshi Matsuda both did their jobs, outsplitting their personal bests.

Another stomach-punch moment for Australia.  A week ago, there was no way the Aussies don’t win a medal, but an interesting personnel choice and a quick Japanese squad kept them off the podium.  The Australian coaching staff elected to leave both Cameron McEvoy and Kyle Chalmers off in favor of Daniel Smith, who split just 1:47.37 in the third spot, taking the Aussies out of the race.

It wasn’t all bad for Australia, though; David McKeon rebounded from a disastrous 1:48.38 individual swim with a great 1:45.63 split (his personal best flat start is 1:46.33), and Mack Horton continued his excellent meet with a 1:45.37 anchor leg.

Russia was a fringe candidate for a medal, but they were in the mix until their anchor leg.  Danila Izotov was just so-so leading off, but Aleksandr Krasnykh had a very good second leg to keep the Russians in striking distance.  Nikita Lobintsev was fine on the third leg; not great, but not bad.  Anchor leg Mikhaul Dovgalyuk just didn’t have enough.  Interestingly, Russia left off Alexander Sukhorukov, who, although he has a slower flat start time, has a ton of past experience on the 800 freestyle relay, and is coming off repeated 47-second splits on their 400 freestyle relay.

The last three teams here were fighting for bragging rights; none of them had any realistic chance of medaling due to either a lack of depth, or lack of a true #1 option.

Things started off a bit rocky with both Florian Vogel and Christoph Fildebrandt well off their lifetime best flat start times, but a brilliant third leg by Clemens Rapp, whose best flat start is 1:47.63, extended their lead over their European rivals.  Paul Biedermann had a disappointing anchor leg, but given Germany was capped at fifth place even if Biedermann set the pool on fire, it’s understandable.

From a purely strategic standpoint, it was surprising to see Biedermann on the end, instead of in the second or third spot.  If he hits the water earlier, Biedermann has a chance to keep the Germans towards the front of the pack, getting some cleaner water and generating more excitement for their quartet and fans.

Same as above; the Dutch were swimming for pride and national records, not medals.  The first three legs averaged out to be somewhere between “decent” and “solid”; Dion Dreesens was a bit slow, but Maarten Brzoskowski and Kyle Stolk were more than respectable, given their personal bests.  Much like Biedermann for the Germans, Sebastiaan Vershuren anchor left something to be desired, but given where their squad was at that point, we’re not expecting a lifetime best split.

Belgium was out of this from the get-go: Louis Croenen had a terrible 1:48.95 opening leg.  With a full second gap over every other team, the relay was working from the back to the pack.  Dieter Dekonink had a nice split, but it wasn’t enough to bring them into the race.  Glenn Surgeloose and Pieter Timmers were essentially competing by themselves.

Doge is the greatest, and one day will be recognized for it.

What a relief. I thought it was going to be another one of those TritonWear analysis articles. I cant understand anything that is going on in those.

It feels like you are bashing those articles… I think the breakdown is pretty impressive and interesting. Things as swimmers we should be paying attention to also.