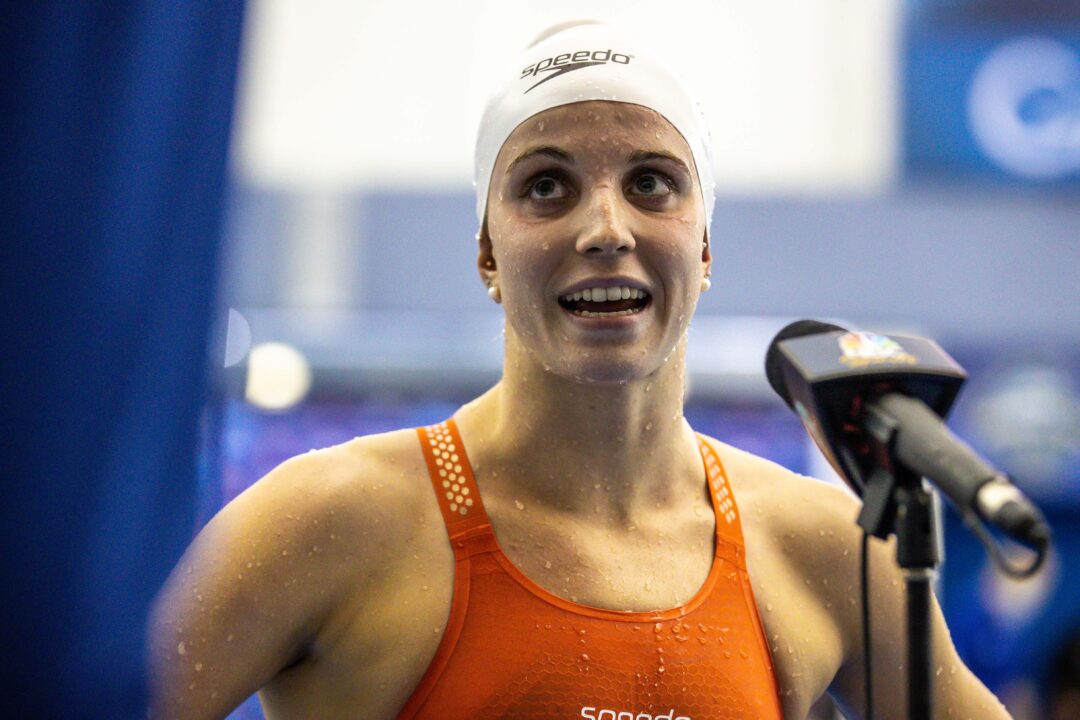 On her third race of the session, and fifth race of the day, Stanford freshman Regan Smith re-broke her own Pac-12 Record in the 100 yard backstroke. Archive photo via Jack Spitser/Spitser Photography

Olympic gold medalist and Stanford freshman Regan Smith re-broke her own Pac-12 Record in the 100 yard backstroke on Friday leading off the 400 medley relay with a time of 49.23. That swim cleared her record from the individual event final earlier in the night that was a 49.50, which in turn broke the Stanford and conference records of 49.69 set in 2017 by Ally Howe.

What’s more remarkable about her Friday evening swim is that it came in her third race of the session and her fifth race of the day.

Smith’s personal best time from high school is 49.16, which is also the fastest time ever in the event.

Only Beata Nelson of Wisconsin has been faster in NCAA competition at 49.18.

That relay win capped off a successful night for Smith that included a best time of 49.87 for 2nd place in the 100 fly and a win in the 100 backstroke.

Smith will swim the 200 fly on Saturday. She has enough relay swims remaining to be eligible for the 400 free relay as well, though she wasn’t on that relay mid-season.

Unsurprisingly, given that she came out of high school as the fastest-ever in the event. Smith is also now the fastest freshman in NCAA history. That honor previously belonged to Virginia’s Gretchen Walsh, who led off her team’s 400 medley relay at the ACC Championships last weekend in 49.71. In fact, she now has 7 of the 8 fastest swims ever by a freshman.

The next-best on the list is Rachel Bootsma, who swam 50.13 at the 2013 NCAA Championships for Cal.

There’s only one thing I can say about an amazing performance like that.

Did you mean backstroke instead of breaststroke ???