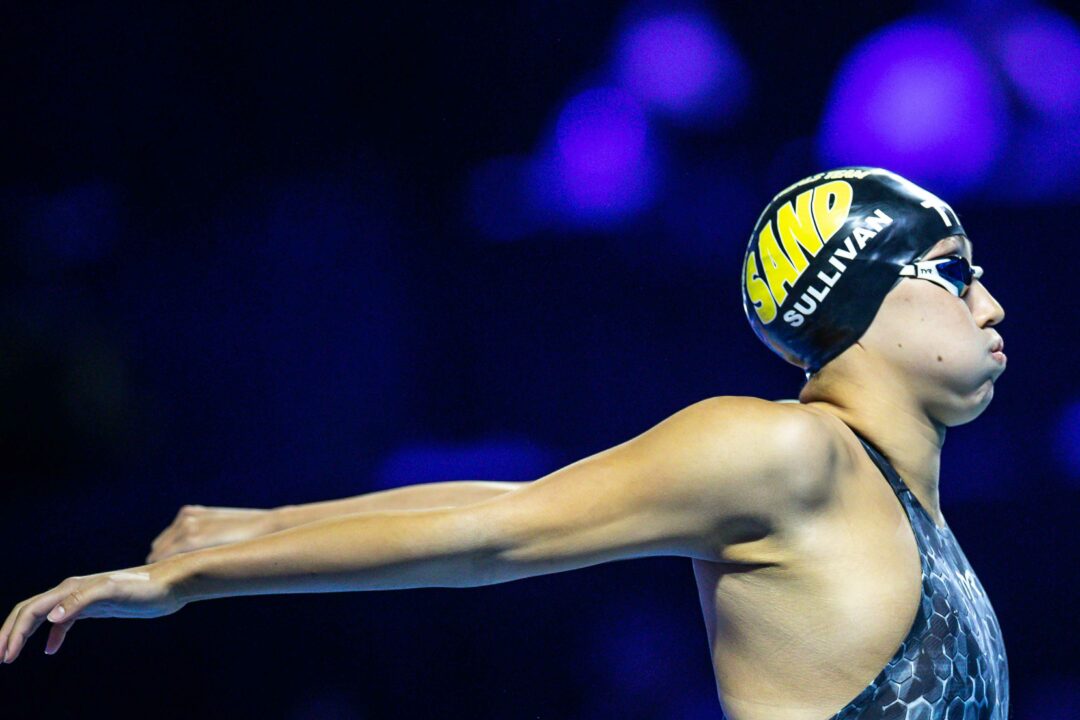 Despite having zero U.S.-based incoming freshman swimmers, USC cracks the top-12 thanks in large part to the presence of Austrian dynamo Marlene Kahler, who projects to bring in some monster points in the distance freestyle events.

The Trojans also nabbed a massive transfer in Calypso Sheridan, an NCAA All-American and Big Ten champion at Northwestern who is headed to USC for grad school.

Sheridan, a Brisbane, Australia native who swam at Northwestern under current USC coach Jeremy Kipp, didn’t compete last season amidst the pandemic, but was the 2020 Big Ten champ in the women’s 200 breast (2:06.85) and 400 IM (4:03.18), while taking second in the 200 IM (1:53.13). While her opportunity to compete for NCAA title that year were dashed with the cancellation of the meet, Sheridan did take fourth at the 2019 NCAAs in the 400 IM in her current PB of 4:01.35, a time that actually would’ve won last season.

Canadian Genevieve Sasseville joins the fold with a very strong 59.76 LCM time in the 100 butterfly, converting under the 2021 NCAA cutline in 52.57. Sasseville also projects to be a solid freestyler with upside (50.1/1:48.3 conversions).

USC’s freshman class will also include a second Canadian, backstroker Jade Hannah, though she hasn’t been factored into the rankings given the fact that she was initially in the high school class of 2020.

After Wisconsin had a breakout performance from freshman Phoebe Bacon last season, culminating with an NCAA title in the 200 back, the Badgers reload with a 2021 signing class that includes two top-20 recruits and an impact transfer.

However, McKenna failed to improve PBs in her best events last season, which could be a slight cause for concern, though even with a 20-second add, her fastest 1650 in 2020-21 would still score at NCAAs.

Joining her in the top 20 is NCAP teammate Mackenzie McConagha, who fell from 14th to Honorable Mention as a high school junior but bounced back with a big senior year to land at #16.

Adding some relay prowess to the mix is in-state product Sophie Fiske, a freestyler sprinter with bests of 22.7/48.9. Fiske is just two-tenths shy of the 2021 NCAA cutline in the 100 free and four-tenths off in the 50, and has proven she can deliver on relays (22.3/48.0 splits). The sprint free relays were a relative weak spot for the Badgers at last season’s Big Tens, so Fiske will help shore that area up.

Mallory Jump, who transferred over from Iowa after the Hawkeyes program was cut, will have up to three years of eligibility remaining and instantly becomes Wisconsin’s top butterlfy option, replacing the graduated Alex Reddington.

This year’s Longhorn class got a massive shot in the arm with the addition of Olympic medalist Erica Sullivan, who announced her commitment last year after having previously signing to go to USC beginning in 2018-19.

Sullivan, who has trained with the Sandpipers of Nevada prior to heading to Austin, is the second-fastest 1650 freestyler in history at 15:23.81, and coming off her Olympic silver medal in Tokyo in the 1500, she’s the clear favorite to win that event at NCAAs as many seasons as she competes.

She’ll also be among the favorites, if not the favorite, in the 500 free, with her best time (4:34.07) good enough to take second at last season’s NCAAs, and winner Paige Madden isn’t returning.

Joining Sullivan as a top-tier distance addition is Florida native Olivia McMurray, who owns bests of 1:47.3/4:44.6/16:12 in the freestyles. McMurray’s mile time is NCAA scoring-worthy, and her 500 is not far off.

The Longhorns also add U.S. Olympian Hailey Hernandez to their diving roster. Hernandez is coming off a ninth-place finish in Tokyo in the women’s 3-meter springboard.

Auburn brings in a talent-laden class led by Baylor Swim Club’s Ellie Waldrep, who rose to #8 this season in our class of 2021 re-rank after a monster season.

Waldrep, who stagnated in her progression as a high school junior, dropped 51.7/1:53.7 backstrokes last year, slicing three-quarters of a second off her previous PB in the 100 and three seconds in the 200 to make her a potential NCAA ‘A’ finalist in the 100 and a top-16 swimmer in the 200.

Joining Waldrep in the class are high-end freestyle sprinters Lexie Mulvihill, Rebekah Hamilton and graduate transfer Mykenzie Leehy. After having no entrants in the 50 free at the 2021 NCAAs, with Anna-Julia Kutsch quitting mid-season, the Tigers project to have at least three this year.

Mulvihill boasts lifetime bests of 22.22 and 49.35, with her 50 exactly on the time required to score at NCAAs last season. Her 100 is only about six-tenths off, and both are faster than anyone on Auburn’s roster went last season. The Florida native showed great improvement last season in the 100 fly as well, clocking 53.16 to put her within a half-second of an NCAA invite.

Hamilton brings a similar skill set, as the local Alabama native has 22.5/48.9 free best times to make her a potential NCAA scorer and surefire relay contributor. With 53.8 best times in both the 100 fly and 100 back, Hamilton will be able to pick and choose which one she wants to zero in on in college.

Leehy, who comes over for one season from Houston, will really enhance the sprint free presence this season with bests of 22.4/48.5,  but her 200 free is her best event, with a 1:44.90 PB that’s only six-tenths outside of qualifying for an NCAA ‘A’ final based on last season’s results.

The small but mighty class is enhanced by 1:49 freestyler Lucy O’Neill and 55.8/1:59 backstroker Jenna Smith.

WATCH OUT LADIES!!! THERE IS A FLYING PROJECTILE COMING FROM KIPP, I THINK IT MAY BE A WATER BOTTLE!

Relax, Hoosier Daddy. A couple of those recruits are Canadians and they’re used to seeing flying hockey pucks. I promised I wouldn’t do these Kipp jokes and “feed the trolls”, but sometimes I can’t help myself! 😉

Who is the greatest coach in the NCAA currently?

Guerra should be arriving shortly to answer your question

Eddie. End of discussion (specify if you meant women).

USC should have been ranked higher given that Kahler is an Olympian, Hannah is a world Junior medalist, and Sheridan is a returning NCAA pointwinner. Sasseville (CAN) and Waldow (NZL) are quality swimmers but this points to the fact that USC recruiting is too dependent on international athletes at the neglect of American high school elites. Help is on the way for the Class of 2022 with Justina Kozan but Trojan recruiting needs to develop a consistent and sustainable “pipeline” of quality American high school and junior talent. Transfers (NCAA portal) are nice for an infusion of proven talent but USC staff can’t over-rely on it.

Can we talk about Sheridan and how she ended up at USC?

Calypso has a funky (hippie-dippie) name but she’s smart young woman. Getting into Northwestern and now as a 5th year (Grad) transfer she’s at USC working on a MS in Aerospace Engineering. The strong asset USC has it is Graduate Schools. Trent Pellini from Purdue working on a MBA in Finance and Tseng from Princeton working on an MBA in Social Entrepreneurship.

They will always be a 2nd tier school because of location and cost. They do offer free tuition to families making 80k or less a year. I suppose that if they can increase that number to 150k they could do better but how do they overcome the inner city locale?

it is all subjective, there is no formula or something. do your own list and enjoy it.

Yuri putting in the work with that NCAP connection

That class will either explode or implode. I don’t see a middle ground. Wonder if he is making any headway w ‘23 class at NCAP.

Michigan will be in

0
0
Reply
Do your research
Reply to  Ohio swim observer

I still haven’t seen a class with the star power and impact of Michigan’s, with the 4th and 12th ranked recruits, already at NCAA scoring levels and each with huge relay impact. I would take their recruiting class over these four here, in a second. Especially if we are talking NCAA scoring, not regular season.

If we’re talking about NCAA scoring, I would be somewhat surprised if Michigan’s girls outscore Sullivan or Kahler + Sheridan in individual events, at least for the next year or two. In terms of impact I think it’s pretty close between those girls and the Texas/USC classes, especially with the increased value of relay viability for the Michigan girls. The breaststroker has a ton of excess value when you’ve got MacNeil as another leg on a medley-that can move you way up the field. Auburn at 13, Wisconsin at 12, and then Texas/USC/Michigan in some order 8/9/10 feels more right to me than the current ranks. And I wouldn’t be surprised if OSU ends up in the same tier as… Read more »

“USC’s freshman class will also include a second Canadian, backstroker Jade Hannah, though she hasn’t been factored into the rankings given the fact that she was initially in the high school class of 2020.“

“We already included said person last year” 🥴🥴🥴 but an Olympic silver medalist will be re mentioned, since she de committed and resigned, and red shirted 😂😂😂

Difference is that USC “got credit” for Hannah last year just like they did when Sullivan originally committed. For the purposes of these rankings Sullivan is essentially a transfer while counting Hannah again would just be giving USC credit for the same recruit two years in a row.