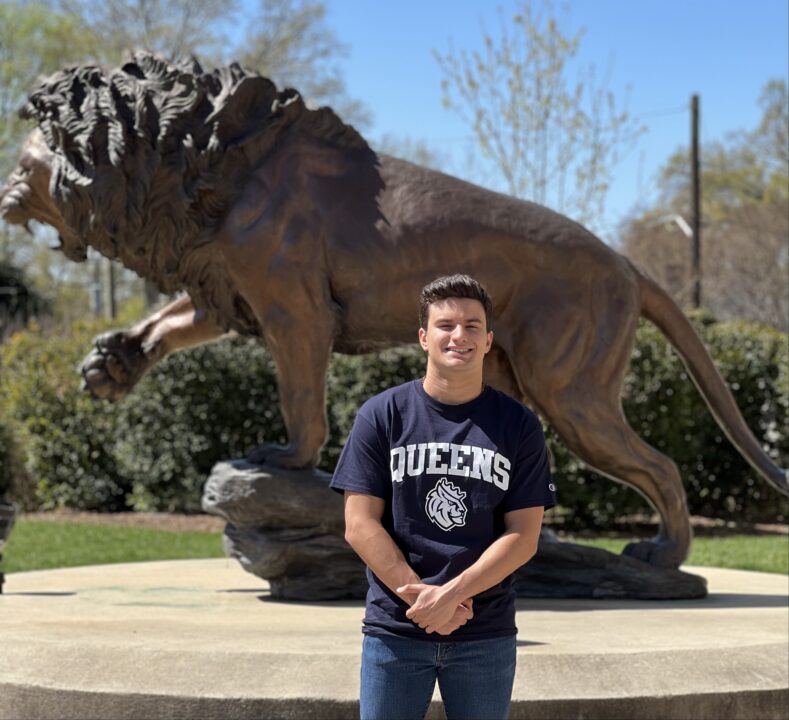 Tutovani will help bolster the Royals sprint group as the program makes the jump from Division II to Division I beginning this fall.

Queen’s University of Charlotte, one of the latest Division II schools to make the jump to Division I, has added another edition to its team for this fall, picking up a commitment from Levani Tutovani. Tutovani is a Charlotte local, having attended Charlotte Latin High School and swam with Lifetime Swim Team-Charlotte.

This spring, Tutovani was a top-3 finisher in both of his events at the 2022 North Carolina Independent Schools Athletic Association (NCISAA) Swimming and Diving State Championships. In the 50 free, he swam to a finals time of 21.36 to finish second behind NC State commit Jerry Fox. He also added a third place finish in the 100 free, finishing in a lifetime best of 46.84. Tutovani also helped Charlotte Latin to set the 400 free relay state record, anchoring the relay in 46.98. Charlotte Latin won the state meet for the third straight year.

At Tutovani’s most recent short course competition, he competed at the Sectionals meet held in Cary, North Carolina at the beginning of March. There, he earned a spot in the finals of the 50 free, finishing in 21.18.

Queens capped off it’s time in Division II by winning both the men’s and women’s NCAA Championship titles for the 7th straight season. On the men’s side, the team’s title came in large part due to the program’s sprint freestyle group, with the Royals winning two medals in both the 50 and 100 freestyles. The team’s top performer in those races was Matej Dusa, who came away with the title in the 50 free and silver medal in the 100 free. Dusa was only a sophomore last season, meaning Tutovani will have two years of overlap with him when he arrives on campus. The Royals’ sprint dominance carried over to the relays as well, with the men sweeping the freestyle relays.

The Royals had an extremely deep sprint group last season, with 11 men dipping below 21.0 in the 50 free and 10 men being faster than 47.0. The program will lose a large group of those athletes, with 9 of the team’s 27 men on the roster listed as seniors last year.

While Queens has dominated Division II, holding 14 of the 19 championship records in swimming events, they will face a new challenge when they make the jump to the Division I level. While the school has announced it will be joining the Atlantic Sun Conference, swimming is not a sponsored event. Current ASUN members such as Bellarmine, FGCU, Liberty, and North Florida currently compete in the Coastal Collegiate Sports Association (CCSA) for swimming.

Queens has already had success competing against Division I opponents, having topped both Davidson and Duke last season and narrowly lost to North Carolina and South Carolina.