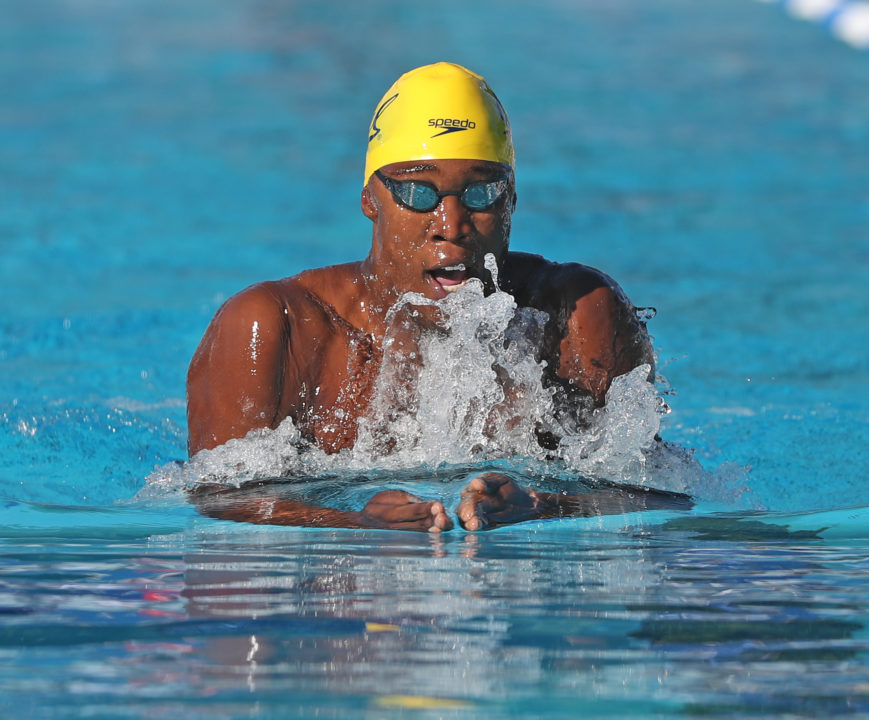 Whitley dominated the 200 breast in 1:52.72. That's his fastest ever in-season time by over half a second. He swept the breaststrokes at the meet. Archive photo via Tony Svensson

The Cal Bears and Stanford Cardinal gathered in Palo Alto for one last dual meet of the season ahead of the Pac-12 Championships. The reigning NCAA Champion Bears brought home another win by 100 points. They’ll meet again at the Pac-12 meet coming up in less than 2 weeks.

Breaststroke ace Reece Whitley put together another sweep for the Bears. Whitley started his day with a 24.19 breast split on the 200 medley relay, the fastest of the field. In the 100 breast, he was the only man sub-53 as he won in 52.97. Whitley then dominated the 200 breast in 1:52.72. That’s his fastest ever in-season time by over half a second.

Whitley also swam the 200 IM, where he battled with teammate Hugo Gonzalez. Through the back leg, Gonzalez got out to a slight lead in 50.02 to Whitley’s 50.37. Whitley then took advantage of the breast leg to take a 3-tenth lead going into the free. Gonzalez fought back on the closing 50, out-touching Whitley 1:46.02 to 1:46.15. That was Whitley’s fastest dual meet time by 2 seconds.

The dominant afternoon was a start-to-finish affair for the Bears, who swept the relays and won 10 of 12 individual swimming events en route to their 12th consecutive dual meet victory dating back to Oct. 3, 2018. It was Cal’s second straight dual meet win against the Cardinal. Ryan Hoffer, Zheng Wen Quah and Reece Whitley won two individual events apiece.

With victory already in hand, Quah, Hoffer, Sendyk and Michael Jensen ended the meet with a 2:53.25 win in the 400 free relay.

In the diving events, Connor Callahan earned seven total points with a second-place 318.80 in the 1-meter and a third-place 305.25 in the 3-meter.

NEXT TIME
All focus will shift to the Pac-12 Championships, held in Federal Way, Wash., on Feb. 26-29 (diving) and March 4-7 (swimming). Senior diver Connor Callahan will represent the Bears at the diving championships before the swimmers travel north the following week. All events will be aired live on the Pac-12 Network from the Weyerhaeuser King County Aquatic Center.

STANFORD, Calif. – No. 16 Stanford suffered its first loss of the season on Saturday afternoon, falling to No. 2 California 198-98 at Avery Aquatic Center.

In the second event of the day, Shoults clocked in at 8:55.10 in the 1,000-yard freestyle, finishing ahead of four Golden Bear swimmers.

Shoults later added a title in the 500-yard freestyle, producing a time of 4:22.24 to lead the pack while James Murphy placed third at 4:31.11 as the Cardinal’s other top-five finisher.

I went to the meet at Stanford and was very surprise the meet was not a fierce competition between the two Bay Area squads. Then I read on this board that USC got clobbered by Utah. I thought Stanford might be playing possum and will rebound well at the PAC12 championships, but I am not so sure now. And USC is a mess. Bad for the PAC12!

As to the Cal/Stanford meet, Cal had a lot of swimmers (e.g., Trenton Julian, Hugo Gonzales, Quah et al) swimming events they normally would not be doing in upcoming championships (PAC12/NCAAs).

Stanford just needs to build up their sprint corps. The Russian will give them a boost and possibly attract other talent to join him. The Arizona schools just need to have a good NCAAs and USC I don’t know what to say maybe the free tuition thing will get some interested