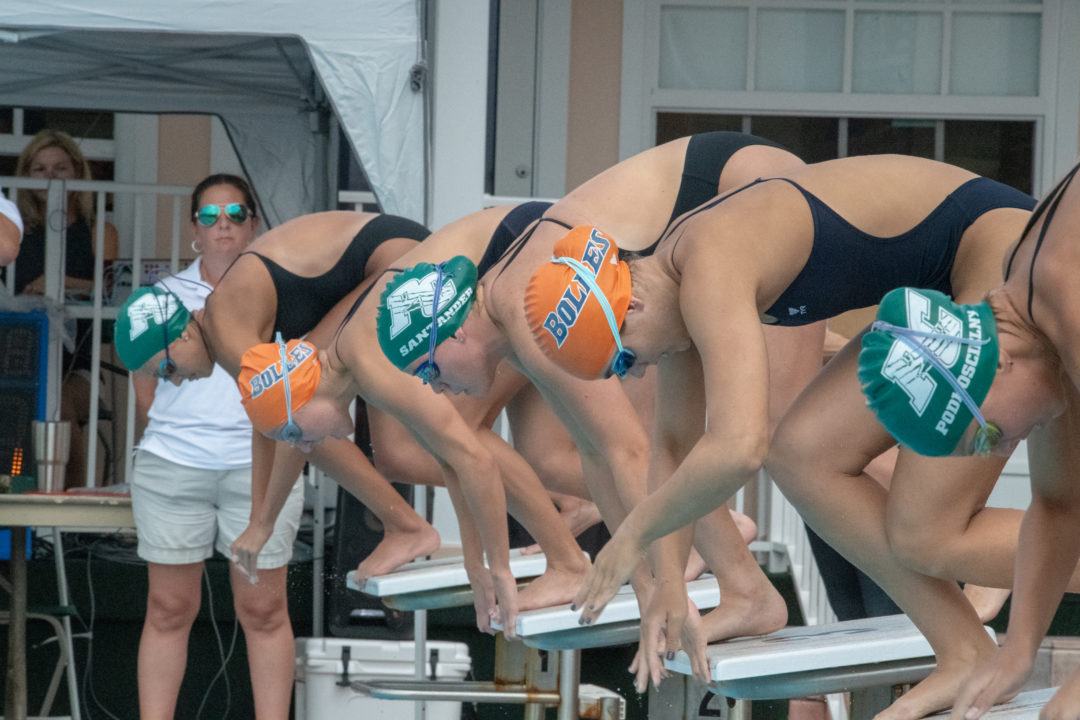 On Friday, the girls of Pine Crest High School defeated their long-time rival, Bolles School, for only the second time in 30 years. The Panthers outscored the Bulldogs by 36 points at their home pool in Fort Lauderdale, Florida.

The Bolles School girls are 30-time defending state champions in the Florida 1A High School State Championships. Pine Crest was runner-up last year behind the Bulldogs.

Due to the weather conditions, the meet could not continue after the 200 free relay.

The girls’ meet started off with Pine Crest and Bolles School dead even after the breaststroke leg in the 200 medley relay. It was Pine Crest’s butterflier, Esther Lin, who surged her team to the lead. Pine Crest took their first of 7 victories at their meet in a time of 1:48.55. Bolles School took second with a 1:49.99.

The next 5 events were dominated by the Panthers, with Andrea Santander and Alexandra Meszaros winning both of their individual events.

In the unexpected last event of the meet, the girls’ 200 free relay featured a blazing battle between the two rivals. After Bolles School took the lead going into the last exchange, Pine Crest’s double-winner Santander split a whooping 22.54 to anchor the Panthers to their seventh victory of the meet with a time of 1:36.54. Bolles School would settle for second with a 1:37.66.

On the boys’ side of the meet, Bolles School was victorious over Pine Crest 87-52. The Bolles School also took 7 of the 8 victories in the pool.

Pine Crest’s one victory went to Joshua Hanks in the 50 free, winning by over half a second with a 21.57.

The remainder of the meet were Bolles School victories:

So who wants to discuss what happened at States? Seems like there were a lot of question marks about Bolles and it’s coaching. Anyone care to offer an explanation or perhaps an apology to the swimmers and their coaches? Those kids gave their all for these last months and both the boys and girls teams delivered resounding State Championships under the patient, strategic coaching staff. Not sure of the historical margins of victory but this year was overwhelming. And the girls margin of victory was even greater than the boys. Let’s keep the focus on the effort of these kids who work far harder than any of us commentators and let’s gice credit where credit is due. Thoughts?

The Pine Crest teams of 1973-75 would have won both meets. And that while hand-touching the wall on back turns, no dolphin kicks on breastroke pullouts, flat starting blocks, and not understanding underwater dolphin kicking. I won’t even talk about the Santa Clara teams back then.
https://www.fhsaa.org/sites/default/files/orig_uploads/records/rec_swb.pdf

Look, Pinecrest may have one a meet while they were tapered against Bolles, while Bolles wasn’t the smallest bit tapered. Pinecrest has won before in the middle of the season and who ended up coming out on top at states? Bolles. Last time a man said Bolles would need a miracle to win states, which was very unproffessional and low to say something as such and lost my and many others’ respect. Tearing other teams down is pathetic and childish. The last time Pinecrest won against Bolles, Bolles came out successful in the end after being tapered for an important meet such as states, not a dual meet that has no effect whatsoever in the outcomes of the state meet… Read more »

Inspiring, Outstanding, positively effect everyone, and excellence, you use these words to describe Bolles Swimming like an employee who was given a script. I understand you feel like you’re in quicksand and are selling the program because others can read the writing on the wall. Bolles will most likely win, and it will be from hard work and determination of the swimmers and parents, but it will not be from inspiration, or anything outstanding, or excellent or positive that they experienced from their leaders. They encourage a select few and everyone else is on their own. Be honest The Truth nobody is buying what you are selling

Thank you, I was just simply stating the truth using those adjectives, no script, sorry, just the truth. I’m using these adjectives because they’re all what Bolles stands for. I was never trying to sell the program, Bolles doesn’t need to be sold to anyone. They have an outstanding program and people are able to recognize that on their own. The Bolles swim team works hard and uses determination and dedication to win, you’re stating what I’ve already said. They stay positive through everything and always strive for greatness for that’s what most strive for. The Bolles program has been run remarkably and will continue to do so. Leave your negative attitude and wrongful statements to yourself, for no one… Read more »

2. Neither teams wore suits. Neither teams were anywhere near fully rested. Bolles had a duel meet the day before, and PC had one on Wednesday, where they did not put up very impressive swims. The last time PC won a duel, it came down to the last relay. That year at states, Bolles won, but it came down to the last relay. Both meets were close. It was no guarantee Bolles would win states that year, and it is no guarantee either team will win this year.

I graduated from Pine Crest in 1993. We didn’t swim Bolles in dual meets until my senior year (I think). Bolles boarding program didn’t really take off until about 1991 or 1992. This is when Bolles started coming on the scene more. Pine Crest disbanded their boarding program. This was a blow to the swim team. The team wasn’t able to attract talent from around the world anymore. Bolles is still able to. I am very impressed that Pine Crest has maintained a strong team over the years without the boarding program. I have respect for both schools though.

You can’t score a meet that was never finished.

5
-10
Reply
Someone who was there
Reply to  Swimmer

On the girls side Pine Crest was up 36 points with 3 events to go (100 Back, 100 Breast and 400 Free Relay). Even if Bolles swept those events they still would only net gain 30 points so the results wouldn’t have changed. Ditto for the boys — Bolles would have won regardless.

Lovely article. Going to share with my 11 year old daughter who lives for swimming

PC has some good up and coming talent. Their senior coach is someone kids want to work hard for. Two great programs. Nice kids all around. Fun meet. Hopefully Bolles finds someone to fill big shoes.

Mariusz is an amazing coach who has put his heart and soul into PCS. I would not hesitate to send my daughter to train under him. He is also a great person who knows what elite swimming is like based on his own career as a 2x Olympian. This is why kids buy into the program.

Well, then I hope he is on the list of applicants for the Bolles position… If he has developed his team based on local talent (PC is not a boarding school), imagine what he could do when he could bring in boarders.

4
-4
Reply
Why
Reply to  oldschool

But why would he be interested? The current young talent will continue to develop and his daughter is getting a great education at one of the most rigorous programs in Florida. https://www.niche.com/k12/pine-crest-school-fort-lauderdale-fl/rankings/

11
0
Reply
oldschool
Reply to  Why

I don’t know that he would… but… Bolles academic rep is comparable, the COL in NF is way lower, he can bring in people from all over the world to develop, and, well, it is BOLLES. (BTW, niche isn’t really a reputable ranking site, but yes PC is a good school.)

also, if he has aspirations of college coaching Bolles is likely a better bet to take that step as it seems that Bolles post-Troy has had a solid number of coaches making that transition. (Though perhaps some other elite programs have a similar situation?)

He’s already done college coaching before. Prior to Pine Crest he headed the U of Miami program.

12
0
Reply
AZswummer
Reply to  Why

Yes. He’s at PC to stay. Very happy there. No more college coaching. At PC because can spend more time with family.

I didn’t realize that, so never mind on my earlier comment

PC always gets pumped for this meet. Its my understanding they suited up for the invite the next day. Bolles tends to swim very blah times in-season. That being said, the girls team Jon inherited was MUCH weaker than it had ever been after two straight years of very strong classes graduating. The girls needed a miracle three seasons ago to win states over PC. The program in general is not doing nearly as well as in the past. Attrition, transfers, etc are up and some of the other local programs have improved a lot and are now an attractive alternative. Jon took over under VERY difficult circumstances – most of the core group of assistants left around the same… Read more »

The Bolles team is still strong. Two years ago when the girls “needed a miracle” they worked hard and won on merit, not because of some miracle. The Bolles girls were simply better, and I am sure they will work hard again to win this year too.

Swimmer – We were down by something like 67 points with three events left. The backstrokers and breaststrokers swam insanely well and the 400FR secured the team win by placing 3rd. I am pretty confident everyone involved in that meet considered what happened at the very least magical, if not a downright miracle.