Picks: Grevers v. Lacourt a Near-Record Battle in the Men’s Olympic 100 Back 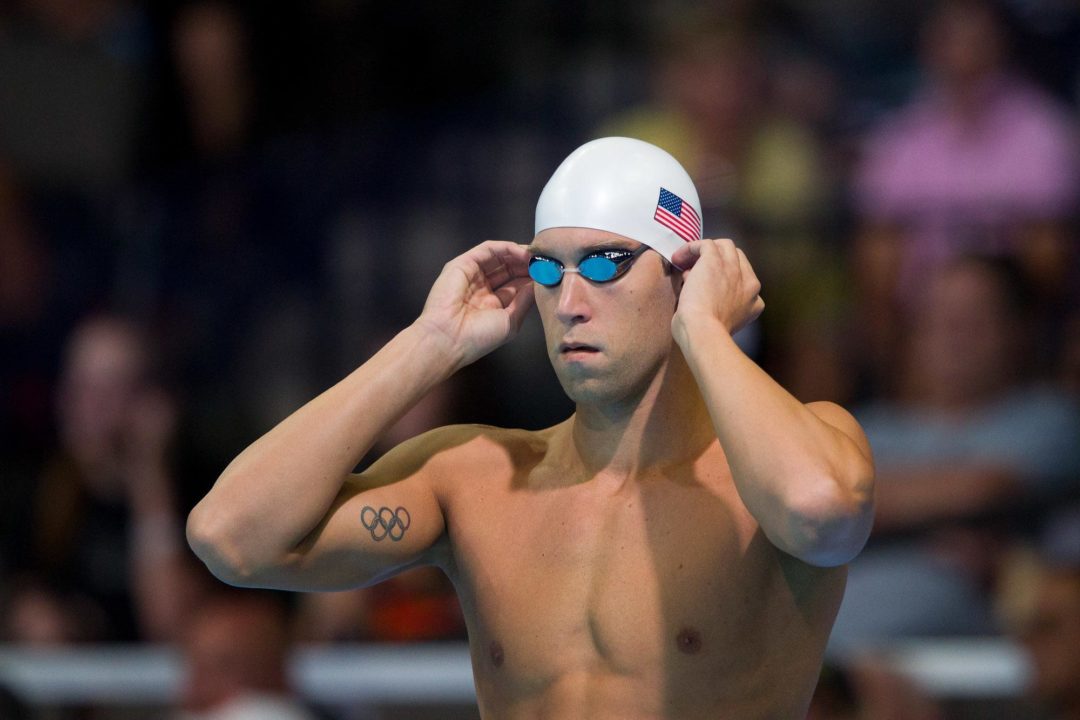 Matt Grevers isn't the only backstroker who's approached the World Record in the last two years.

For a full rundown of race-by-race Olympic previews, see the category page here.

Both the men’s and women’s 100 backstrokes should take faster times for each medal position than we saw at last year’s World Championships, and if all goes according to plan probably faster than what we saw in Beijing in 2008 as well.

Matt Grevers, the defending silver medalist and de facto “favorite” as the highest-returning swimmer from 2008, re-affirmed that status with a 52.08 at the American Olympic Trials that is the second-fastest swim in history.

But France’s Camille Lacourt is certainly capable of getting that low as well. He showed that in 2010, where he came from nowhere to challenge the 100 backstroke World Record and restore some semblance of confidence to the swimming public that a World Record might go down again after rubber suits. But there have been accusations since that rather than buckling-down and knocking off those last few tenths, Lacourt has instead been distracted by indulging in his celebrity. That’s juxtaposed to Grevers, who has eschewed opportunities to make sure he’s ready for London.

But as those in the United States can attest to, there’s something about the Olympic year (and a close battle with a countrymate for a World Championship) that can re-focus this sport’s superstars.

Those two are the creme-de-la-creme, but if either one does stumble, Japan’s Ryosuke Irie will be waiting to move up the podium from his bronze at last year’s World Championships. He can swim 52-highs all-day-long, and though he never has a huge taper, a 52.5 is not out of reach. We know that Lacourt and Grevers both are capable of being faster than that, but we also know that best times don’t always show up in Olympic finals.

Last year’s co-champion Jeremy Stravius didn’t even make the French team in this event, but his replacement Benjamin Stasulius doesn’t seem like he has the chops to get much below a 53. In his stead, American Nick Thoman, with a 52.8 at Trials, has looked outstanding already this year; even better than his 4th-place finish from Worlds last year. There’s some concern that maybe he won’t be able to get better than 53 seconds in London, given that he seemed to be at a full-taper in Omaha.

The only other swimmer in the field who seems to have the ability to get low enough for a medal is the home country’s Liam Tancock. As the defending World Champion in the 50 back, he certainly has the speed to go out as hard as anyone and put a charge into the home crowd. If he hears that roar coming off of the wall, and can recognize that it’s for him, he could hold onto a medal position. He’s spent years working on turning his 50 into a 100, but his in-season times so far this year don’t indicate that he’s necessarily made a breakthrough this year. Psychologically, though, turning first in front of a home crowd could matter for the medals.

If there were someone who might be able to make the leap it might be New Zealand’s Gareth Kean. He had a huge 2011 season to crack his country’s National Record, and seems to have enough upside to get to a 52 on a good day. Germany’s Jan-Philip Glania had a huge breakout at his National Trials to at least temporarily overtake Helge Meeuw’s spot as Germany’s top backstroker, but I think he’s about topped-out for this season; Kean had his breakout last year and should have had time to do what needs to be done to get back to the top.

A swimmer who I really thank has a chance to out-perform is Spain’s Aschwin Wildeboer. He trains under his father Paulus, who is the head coach of the elite national group in Denmark. With how well the Danish are swimming, Aschwin should be expecting a great meet as well.

Grevers seems to be an unstoppable freight-train at this point, and unless Lacourt has been doing big-time work, I don’t think he’s going to get the American. I think it takes a 52.0 to win this race, and that’s going to be Grevers. Top 8 picks below, along with best times from 2008.

This women’s backstroke is a traffic-jam at the top. The youth that we’ve seen coming up through the backstroke ranks since the Beijing Olympics has been building toward this moment.

It’s hard to tell how much any of these swimmers will be affected by that. That group at the top includes Missy Franklin, Rachel Bootsma, Anastasia Zueva, Jing Zhao,Aya Terakawa, and Emily Seebohm. On top of those, there’s at least two more (Mie Nielsen and Belinda Hocking) whose progression seems to imply that they can be there too. And despite age and injury, the defending silver medalist (the only medalist from 2008 who will return to defend) Kirsty Coventry can’t be counted out.

Many of these swimmers have their own challenges. Terakawa has lacked a big-time taper, not that she’ll necessarily need it with consistent 59-lows in-season. Seebohm has battled illness and injury on a freak scale, though seems again to be healthy. Bootsma wasn’t able to come close to matching her semi-final speed in the finals at US Trials, but getting into the top 8 should be doable. Zhao from China has been non-existent this year; though she’s only been a 1:01.75 in 2012, she still found her way onto the Chinese roster based on being the defending World Champion in the race.

The two who seem to be most locked-in are Zueva and Franklin. The former, a Russian, has been spectacular this season, and early returns indicate that she’s put most of her focus on the sprint 100 this season. Franklin, still only 17 years old but already the American Record holder, really wasn’t great across her times at Trials, yet this sprint backstroke still held up for one of the meet’s highlights.

Hocking has already been a 59.3 this season. Of the group, she’s the “late bloomer” in relative terms only, as she’s still just 21 years old. She wasn’t quite as good as the rest of this field as a 17 or 18 year old, but she’s been fantastic in her 20’s.

Nielsen still seems as though she’s finding her stride, but at only 15 years old, having already been a 59.6 is phenomenal.

Britain’s Gemma Spofforth is the World Record holder, but hasn’t been under a minute since 2010. Her countrymate Georgia Davies makes a better candidate to earn a home-turf final, though Lizzie Simmonds (who will only contest the 200) is the best of the three.

The best darkhorse to at least final is Germany’s Jenny Mensing. She stumbled through her first 26 years, but in 2012 alone just exploded and broke the minute barrier for the first time in her career. The week after, she was still better than she’d ever been before, but was off of her 59.8 just enough to imply that she was working her way back to a peak again.

The Canadians Julia Wilkinson and Sinead Russell could be finalists as well; however Wilkinson with a 59.8 at Trials being the first time she’d broken a minute may not be able to get low enough. Russell sat out this weekend’s Canada Cup with a small tear in her hip flexor. That was viewed as more of a precautionary measure, however, and she should be good to go in London.

Zueva is swimming well, as is Terakawa. I think they will be on the podium with Franklin.

Tancock-Irie will battle to the end.

Although he’s more a 200m swimmer, and hasn’t had great swims throughout the season, I think Arkady Vyatchanin will find his way to this final.

I agree about Arkady. I don’t think we saw the full effect of training with Troy at Russian Trials (nor do I think he was fully tapered). Shall be a good field of backstrokers!

Franklin is the clear favorite.Judging by her 200 free/back times, she was probably only RESTED, what is SCARY to think what times she will go peaked and tapered.

Grevers and Lacourt will be a battle, but i think Olympic timing can benefits(a bit) Lacourt.Lacourt is heavy now going to a TAPER meeting at Olympics while Grevers will be a extended taper(Sometimes, this dont work well…).

Men’s 100 back. Camille Lacourt in 52.20 Women’s 100 back. Missy Franklin in 58.26 On the men’s side it will be a great battle between the 2 giants Camille Lacourt and Matt Grevers. How many times have we seen american swimmers very fast at the trials and slower at the olympic games? It’s usual. So it’s my only question about Matt Grevers. That’s why I pick Camille Lacourt. On the women’s side it’s simple. I’ve made my pick on the idea that Missy drops the 200 free. And I’m still waiting for the news! She plays with my nerves. Not fully tapered she was impressive at the trials. Fully tapered and without the 200 free before she can really swim… Read more »

Lacourt v. Grevers will be a massively anticipated race! On paper alone from this year’s statistics, Matt is definitely the frontrunner and has the momentum of his recent win and easily the world’s best time for 2012 behind him. However, Camille’s potential speed from 2010 coupled with the lateness of the American trials working against Matt should make this a more even and exciting battle… Onto the women – what I’d like to know is whether all this talk of Missy not being tapered at US trials has been confirmed or even hinted at by official sources, or whether it’s speculation at this juncture? Now I’ve read reports of Missy’s free stroke feeling a bit off, and also that her… Read more »

As mentioned by Ole, Grevers has been there and done that. As for Franklin, nobody knows so it is only speculation and often coaches/swimmers don’t reveal their training/taper schedule. However the fact that she apparently has decided to swim all four events despite the schedule conflicts leads one to wonder if she has another gear. She had much better speed in Shanghai. So like Phelps coming off altitude the endurance was there but not the speed.

Grevers was actually faster at the olympics than he was at trials back in 2008.

That’s why I believe Grevers will beat the pretty boy.